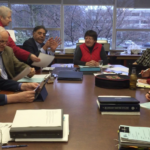 On Tuesday, March 28th, Stop Demovictions Burnaby organizers attended the city of Burnaby’s “Planning and Development” Committee Meeting, ready to share their People’s Tenant Defence Policy. Weeks earlier, organizers had occupied the Mayor’s office which led to a meeting with Councillor Colleen Jordan, chair of the Planning and Development Committee, who assured them that the City of Burnaby would review the current Tenant Assistance Policy at the upcoming committee meeting. When asked if organizers and residents could come to that meeting and speak about the problems with the current policy, Jordan replied, “the meetings are public.” But when Stop Demovictions Organizers took Councillor Jordan up on this proposition, and came together to draft a People’s Tenant Defence Policy to present to committee members, Councillors shut them down and turned them away. (…) 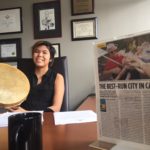 On Thursday March 9th, myself and a group of activists with the Stop Demovictions Burnaby campaign occupied the Mayor of Burnaby’s office. This was not what we had originally set out to do. All we wanted was for the City of Burnaby to enforce the “Burnaby Tenant Assistance Policy” – a policy it had passed in May 2015. Our request was reasonable, and we hoped for an equally reasonable response. But this was not what we got. Instead the City of Burnaby called the police on us and we had to wait hours, occupying the Mayor’s office for leverage, to even talk face to face with Councillor Colleen Jordan. (…)