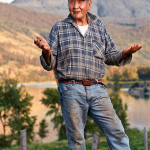 Love, respect, hope, strength, and a deep thirst for freedom and justice flowed through Wolverine’s Memorial held a few days after the 84-year-old warrior released his spirit on March 22nd, World Water Day. Water was one sacred resource he fought for until the end of his days, leaving the community a legacy to continue to defend.(…) Wolverine calls on PM Trudeau for an Inquiry into Gustafsen Lake

Dear Mr. Trudeau, My name is Wolverine. I am also known as William Jones Ignace. I am an 83-year old father, grandfather and great grandfather, and an Elder of the Secwepemc nation in what is called British Columbia. I am a farmer. This past summer I cultivated 8 acres of organic food to nourish the people in my nation and other nations as well. I am a long time defender of the inherent jurisdiction of Indigenous peoples to steward our traditional homelands.Today I am writing to you to request that you initiate a federal public inquiry into the events surrounding the month long standoff at Ts’Peten (Gustafsen Lake), British Columbia in 1995, an event which cast a deep shadow on the relationship between the Canadian government and Indigenous nations, which to this day has not been adequately investigated. (…)