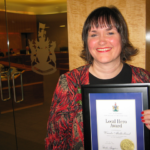 Hello, my name is Wanda Mulholland. I am the Coordinator for the Society To End Homelessness In Burnaby. In 2005 homelessness was considered by Burnaby citizens to be an issue specifically for the Downtown Eastside of Vancouver. At that time citizens did not realize that there were Burnaby people living in extreme poverty and homelessness. The City of Burnaby 2011 Social Sustainability Report states that poverty is a serious issue confronting some residents of Burnaby, many of whom are increasingly challenged in accessing basic life necessities. Almost 20% of Burnaby households had incomes below $20,000 in 2005. An Angus Reid Poll commissioned by the Regional Steering Committee on Homelessness in September 2012 found that one-in-four (23%) people surveyed in the Lower Mainland know someone who is currently homeless or has been homeless during the past five years. (…)