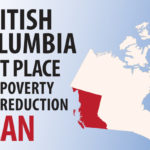 It’s time to be moved to action against poverty

I can tell you all the facts you want to know about the state of poverty in our province. Over half a million people in BC live in poverty. One in five children live in poverty. But facts are not enough; facts alone have never changed the world. Homeless people are dying on the streets. Dying half a lifetime younger than the rest of us, at 40 years old instead of 80. At the end of meetings in the Downtown Eastside, we have a tradition where we stand in a circle and hold hands and name the people who have died, and honour them with a moment of silence. There are always new names. People are dying of poverty in our communities. (…)