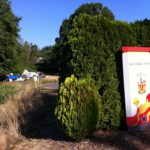 Tent Cities Unsafe for Whom? Report from the Langley Homeless Camp in Nicomekl Park

About three months ago, Darcy and his friend Kathy set up a tent at the edge of a floodplain in the City of Langley’s Nicomekl park. They had been displaced from their previous campsite and thought the park offered a visible location and some distance from the nearest neighbors. Soon, more tents went up in the nearby trees and bushes of the floodplain. On Friday there were nine tents in the main floodplain area and Darcy estimated about twelve people living in the camp consistently. According to Darcy, this is unprecedented in Langley, “They have never allowed us to congregate anywhere”. In his ten years of being homeless in Langley this is the longest he has ever been able to stay in one place. Perhaps this is due in part to last year’s BC supreme court decision that cities can no longer prohibit overnight camping in public parks when shelters are full (…)

Homeless Counts for What?

Every year since 2010 the City of Vancouver has counted its homeless residents. Around four hundred volunteers are recruited, trained, and sent out to lie in wait at Vancouver shelters or hit the streets to follow predetermined routes in search of their homeless quarry. Volunteers are provided with ‘homeless maps’ marked with red stars that indicate places like parking garages or drop-in centres where homeless folks are known to sleep or hang out. Homeless counters flag these individuals down (or in some cases wake them up) to offer them a cigarette before asking them a bunch of personal questions, including “How do you make your money?” and “Why did you not sleep in a shelter last night?” The 2015 homeless count took place in the 24-hour period of March 24. 1,746 homeless persons were counted: 488 on the street and 1,258 in shelters. Behind these numbers lies a process that needs to be questioned. (…)