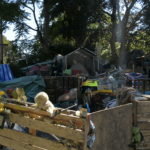 On June 27 and 28 residents of Victoria’s Super InTent City (SIC) were back in the British Columbia Supreme Court as Chief Justice Hinkson heard the second injunction application brought by the Province of British Columbia seeking court-enforced removal of SIC. The Provincial government, which lost its first injunction application in March of 2016, has argued via its lawyer Warren Milman that there has been a “degeneration of conditions” at the camp since the time of the first injunction. At the end of the second day of hearing, Chief Justice Hinkson reserved his decision on the injunction application, with a result not expected until early July. If the injunction is lost, the Province has requested that the camp be dismantled on August 6th. (…)