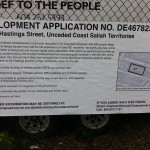 In 2014, the city of Vancouver approved a new Local Area Plan (LAPP) for the Downtown Eastside after four bitter years of consultation. Low-income community groups tend to view the LAPP as a failure as it continues to displace their vulnerable community. Low-income people participated in the process but they were drowned out. Other groups, like Japanese Canadians, wanted to help build a socially just community, but were mostly ignored. (…)