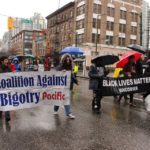 The attack by Soldier Odin on anti-racist protesters on Sunday, March 26th to mark the International Day to Eradicate Racism at Victory Square in East Vancouver is a cause for serious concern. They moved into the crowd aggressively carrying large Canadian Flags and then threw a purple smoke bomb just as Vancouver East MP Jenny Kwan was about to speak. This is the first time a white supremacist group has attacked antiracists in decades. What is more troubling is that the Vancouver Police Department is failing to protect protesters from these white supremacists. (…)