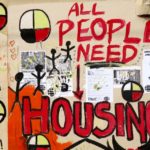 The situation for low-income renters in BC has never been worse. (…) 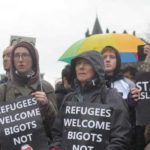 According to the United Nations there are more than 65 million forcibly displaced people in the world. (…) 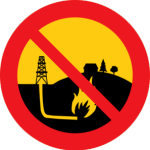 Huge fossil fuel corporations and their allies in government have tried to sell natural gas as a clean alternative energy source. Christy Clark promotes a Liquefied Natural Gas (LNG) boom but willfully ignores its destructive impacts on the earth, all life and the climate. (…) 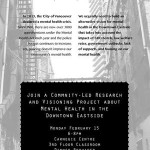 The Carnegie Community Action Project  (CCAP) is working with Downtown Eastside residents to create a Community Vision for Mental Health. Our approach is “nothing about us without us.” (…)

The Downtown Eastside (DTES) is being swamped by high impact gentrifying projects including at 288 East Hastings, southwest corner of Gore Street, across from First United Church. (…)

Justin Trudeau offers a new brand but no fundamental change

Justin Trudeau has become popular by cultivating a drastically different image of Canada than the widely hated Harper government. (…)

Corporations continue to pursue their agenda to rule the world through ever expanding so-called free trade deals. (…)

“Never Home” report reveals the truth about migration to Canada

The NeverHome multi-media website (http://www.neverhome.ca/) produced by No One is Illegal is an invaluable and timely resource. (…)

Governments at all levels (federal provincial and municipal) are increasingly saying no to spending money on programs that meet human needs. (…)

The BC Government is selling about 350 parcels of land and 9 public housing buildings that it owns and operates. (…)

Vancouver has approved the DTES Local Area Plan. What will be its positive and negative effects? Was it worth the three-year effort put in by low-income reps to work with the City? (…)

No new social housing from the Province – 3 community views

with Jean Swanson and Andrea Craddock

New numbers confirm what many of us are experiencing: homelessness is up and the low income housing crisis is going from bad to worse. (…)

The DTES Local Area Planning Process is rapidly winding down to an unsatisfactory conclusion. (…)

Storm Brewing – Local Area Plan and the Future of the DTES

The fight over the future of the DTES is heating up. A DTES Local Area Plan that could last up to thirty years will be presented to City Council for a vote, probably in March. (…)

NO PIPELINES! NO DISPLACEMENT! NO DTES CONDOS!

Well over 1,000 people took to the streets of Vancouver in a very spirited, creative and loud protest against Enbridge’s proposed Northern Gateway and other pipeline projects. (…)

Vancouver and other parts of B.C. are experiencing a dire housing crisis. Huge numbers of people are affected when rents soar far beyond their incomes and ability to pay. (…)

The struggle continues after the BC election

The May 14 provincial election proved to be a disappointment to many in the DTES. We are now saddled with four more years of a right-wing Christy Clark-led B.C. Liberal government dedicated to serving the interests of the rich and powerful. (…)

“My Brooklyn” is a moving, informative but ultimately very sad documentary about how a vibrant diverse neighbourhood can be wiped out by the forces of gentrification. (…)

It is election time. Will the urgent needs of the low-income community in the DTES (and elsewhere in B.C.) to raise the rates and build social housing NOW be met? (…)