In the case of B.C./Yukon Association of Drug War Survivors (DWS) v. Abbotsford, homeless people challenged three City of Abbotsford bylaws that have been used to displace the homeless population from public spaces throughout the city. (…)

“We are somebody” – Abbotsford Homeless take the City to Court

On June 4, 2015, members of the Abbotsford Chapter of the Drug War Survivors and their allies gathered at the Happy Tree for a march down Gladys Ave to mark the anniversary of the infamous chicken shit incident. Two years ago, City workers dumped chicken manure on a homeless camp to stop people from setting up make-shift homes on that spot. (…) 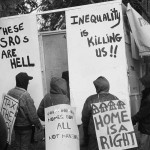 One last chance to save the SRO Hotels

Vancouver’s Single Room Accommodation (SRA) Bylaw has been in place for over 11 years and has proven ineffective at protecting affordable housing. The Bylaw was passed in 2003 to protect single room occupancy hotel rooms for low-income tenants, mostly in Vancouver’s Downtown Eastside. (…)

The numbers from the 2014 Metro Vancouver homeless count are in. In one 24-hour period, 538 people in Vancouver were found living on the streets without a home. The City itself admits that this increase is partly due to the loss of affordable Single Resident Occupancy (SRO) rooms and delays in opening new social housing. (…)

When it comes to housing, members of the Downtown Eastside community are being squeezed on all sides, leaving many with few or no reasonable options. On one side are the ‘slumlords’ who leave buildings to rot and harass and abuse tenants.  All the while, they are benefiting from rental income and rising property values. (…)