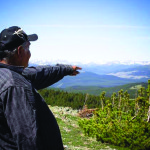 As the leaves started turning in St’at’imc territory it became apparent that the logging company was not going to let up and might try to come in during the winter. Christine Jack responded with a vow that she would not leave the re-occupation that had become her home and would stay through the snow. This set plans in motion for a winter cabin. Many hands came together this past fall to build a home on sovereign land. On March 16th of this year there will be a feast and gathering in celebration of the one-year anniversary of this re-occupation. Last spring, Christine Jack’s elders asked her to make a stand at Oollous (Junction Creek), a traditional gathering place of ancestors, to halt destructive logging and renew traditional ways of living. The cabin she is currently living in is small, but it is a roof while traditional housing is decided upon and built. Christine knows about the struggle for housing and has a lot to say about the state of housing on reserve and how it connects to what she is doing at Oullous (also known as the Voice for the Voiceless Camp). (…)