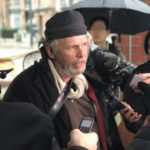 While the City Council is discussing a new housing reset report, aiming to build more housing for the middle class, shelter residents are being sent back to the streets. This morning, residents of the Gathering Place winter shelter, spoke out against its closure this Friday. The Gathering Place is just one of nine shelters set to close on March 31st as funding runs out. Seven additional shelters will be closing across the lower Mainland. The closures of the winter shelters will force 250 people onto the streets in Vancouver this Friday night. (…) 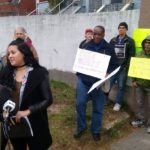 Out of Control: SRO hotel survey finds that market real estate development and low-welfare rates are to blame for record homelessness in the Downtown Eastside

Homelessness in the DTES is a humanitarian crisis. For the first time in recorded history, the number of homeless people in the community escalated to over 1000 in 2016. This means 1 person out of every 18 in the Downtown Eastside is homeless. A major reason for this crisis is the ongoing loss of SRO hotel rooms from the stock of rentals available to people on welfare disability, and pension. Not coincidentally, alongside homeless number, rents in privately owned SRO hotels are also at a record high. (…)