Articles by No Cops on Outreach Victoria, Lekwungen Territories 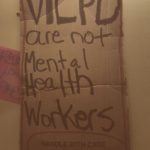 We write to reflect on Victoria City Council’s January 26th vote in favor of the Victoria Police Department’s (VicPD) request for an additional $240,141 to embed two more officers in Island Health’s Assertive Community Treatment (ACT) mental health teams. We write to acknowledge those individuals who shared their experiences of police as agents of violence, who told us that cops will never be their helpers, and whose voices were ignored and silenced.

The role of police is to enforce laws that uphold the status quo and protect the interests of a predominantly white, housed, middle and upper class population. People with mental illness – especially those who live at the intersections of poverty, criminalized substance use, racism, and colonialism – are perceived as a threat to the status quo and are stereotyped as deviant or sick. The decision to add officers to ACT teams is based on an idea that people with mental illness are dangerous and must be contained, and that police are the only ones who can do this work. Council’s decision to fund the police as part of a health care team perpetuates the falsehood that it is up to police to protect “ordinary citizens” from those living with mental illness. (…)