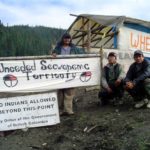 Excerpted with permission from Unsettling Canada: A National Wake-Up Call by Arthur Manuel and Grand Chief Ronald M. Derrickson (Between the Lines)

The issue was Nippon Cable’s Sun Peaks development. [R]apid expansion had not been part of our protocol with Sun Peaks, and now this instant city was being implanted on our territory. This land-devouring project was fed by a government land giveaway scheme that sold our Aboriginal title land to the developers at a rate that accelerated with the pace of development. The more land they developed, the more they were given. Janice Billy, an activist member of our community who was then working on her doctorate in education, informed me that the Elders and youth had gotten together to put up a small protest camp in Skwelkwek’welt. This action fit with the strategy of proving our title on the ground, and I instantly supported it. (…)