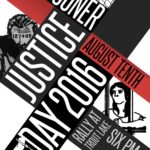 On August 10th 1974, prisoner Eddie Nalon slashed himself in a segregation cell of Ontario’s Millhaven prison. When other prisoners in solitary realized something was wrong they hit their emergency buttons, apparently all of them broken, and the guards failed to respond in time to save Nalon’s life. A year later, the scene repeated itself in the same seg unit. (…)

Prisons in Canada Still Racist After Forty Years of Reform

In the late 1960s, Native resistance in Canadian prisons skyrocketed. Native prisoners fought to reclaim spiritual and social practices banned by prison authorities. They published papers, proclaimed themselves political prisoners, organized self-defense against guard brutality, and occupied and protested within the prison walls. (…)

It is much like a classroom in a school on the outside with concrete walls painted off-white, long, folding tables and chairs, windows, white boards and mockable teaching materials that we all ignore. Joint Effort, a group of women on the inside and women on the outside that get together for workshops of mutual interest, has brought the materials into Alouette Correctional Centre for Women for the drawing workshop. (…)