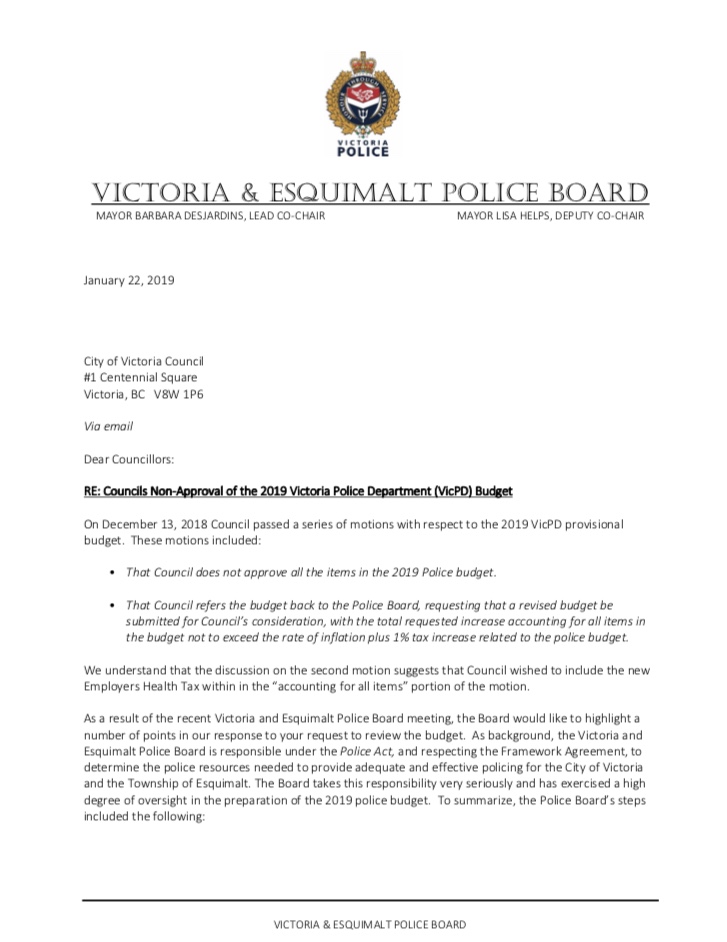 Lkwungen and W̱SÁNEĆ Territories (January 31, 2019) — On January 22nd, the Victoria & Esquimalt Police Board sent a letter to the City of Victoria refusing the City’s request to provide them with a revised budget. This was significant because our group, Communities against Criminalization, has made the police budget a hot political issue in Victoria. This year we have called for a freeze to the VicPD budget and a municipal financial commitment to invest in community exploration of alternatives.

In response to these critiques about police budget increases and their impacts on communities most impacted by police profiling, harassment, and violence, Victoria City Council requested that the Police Board revise their budget for Council’s consideration. They asked that the revised budget reduce the proposed 2019-2020 budget increase to inflation + 1%, still providing a substantial increase of $1.67 million from last year. This week Chief Manak released a letter denouncing his critics of the police budget and his department’s refusal to discuss his request for a budget increase, which was sent to many businesses and and homeowner groups in Victoria and Esquimalt. Chief Manak’s letter critiques Communities Against Criminalization but he does not address our critiques or demands.

In this letter, the Board claims that this budget increase would, because it is approximately half of what was originally asked for, necessitate a staffing reduction of up to nine VicPD officer/civilian positions resulting in reduced services that would “significantly jeopardize public safety.” Additionally, the Board expressed concern about VicPD workload and stress levels as “[a]ll staff, particularly the officers, are already operating at capacity as they try to maintain the level of community policing, visible presence, and call response that our citizens expect.”

We disagree with the Police Board’s assessment of public safety risks. There is no evidence that giving the VicPD a smaller increase than they wanted will result in any threat to public safety. On the contrary, we believe that divesting from policing and redirecting those funds into communities will build safety for everyone.

As context, over the past 10 years VicPD operations spending increased by 32%, a $13 million increase. For this year’s budget the VicPD has requested another $3.24M increase (6% higher than the previous fiscal year) for an operations budget of $57 million. If the City grants this increase, the VicPD operating budget will have increased at nearly triple the rate of inflation over the past 10 years.

Communities Against Criminalization has for the past four years been campaigning for governments to divest from policing and instead put that money into communities developing real solutions to collective problems. As crime rates have fallen police forces across the country have sought to rebrand as health and social service delivery partners, but the reality is that policing and the criminal punishment system are harmful, expensive, and ineffective responses to health and social issues. Preventing and transforming the conditions that lead to community problems is not something the police can do. It is small wonder that police are expressing stress and overwork trying to do something that they cannot accomplish. The solution to this is not funding further expansion of the VicPD but rather resourcing communities to implement real solutions to the most pressing needs.

Budgeting processes are political. By funding some things more and some things less, Council is declaring its priorities. Council’s past prioritizing of police funding over ensuring all residents have access to essential survival basics like shelter, clean water, nutritious food, and access to health care reflects confusion about what is true safety and a devaluing of the lives of people negatively impacted by these decisions.

How the VicPD and Police Board pitches budget increase requests, and what these organizations do if the VicPD gets less money than requested, is also highly political. Having reviewed the VicPD operational details set out in the city’s 2019-20 draft financial plan, VicPD data on calls for service, and recent VicPD quarterly reports to councils, we believe that the VicPD is currently engaged in activities that should be curtailed and that doing so would free up substantial financial resources to improve safety for the people who are in the most precarious positions.

For example, for years VicPD chiefs have been saying that policing poverty, substance use, or behavior attributed to mental illness is a large part of the VicPD portfolio. Their current budget request and recent quarterly reports emphasize continuing to pro-actively target these populations through concentrating officer presence in areas where low-income people live, access services, and socialize, and increased policing of people who are poor and live with mental illness. This emphasis is consistent with local research that details how for years the VicPD has prioritized its resources on intervening in the lives of a group of highly criminalized, marginalized people through pro-active surveillance, carding/street checking, moving people from place to place, ticketing and breaching people for minor infractions (such as not wearing a bike helmet or not meeting curfew), and embedding themselves in health and social services to bring policing into people’s everyday lives. The VicPD decides its operational priorities and doesn’t have to keep allocating their resources this way.

Additionally the VicPD is spending a sizeable amount of public funds on promoting itself. In its January 21, 2019 presentation to Esquimalt Council the VicPD identified that its officers attend 500+ community events and community meetings every year in a public relations function. The VicPD proposed budget includes $1,912,178 specifically for “community engagement,” which has in the past year included making pro-policing promotional videos. These activities cannot be considered the most important use of public funds.

There are very real safety issues to consider, particularly not having adequate housing and government refusal to make a safe drug supply available. The median age of death for a person experiencing homelessness in BC is 40-49, compared to an average of death of 76.4 years in the general population. Since the BC provincial health officer declared a public health emergency in April 2016 in response to the spike in opiate overdose deaths, more than 3,500 BC residents have died from overdose of illicit drugs. As recent research by Pivot Legal Society and researchers affiliated with the BC Centre for Disease Control and UBC concluded, these very serious societal problems are made worse, not better, by policing and criminalization.

To turn this situation around will take time. But it has to start somewhere. All of the evidence points to this being the right time to stop expanding policing and instead invest in communities. Police-reported crime and crime severity in the VicPD service area have been trending down for an extended period of time. At the same time, decades of cuts to public infrastructure and a failure to ensure basic necessities such as housing has resulted in real imminent threat for many people. Funds are badly needed to address real community crises.

Community problems cannot be solved by policing or the legal system – these systems can only surveil, punish, and threaten force to maintain control. Real solutions come from communities working together to transform the conditions that create these problems. Real safety for everyone, not just a privileged few, comes from caring for each other, increasing social cohesion, reducing inequality and engaging in transformative justice.

Editorial: Provincial party politics and the invasion of Wet’suwet’en: The BC NDP’s special role in the settler colonial state

The colonial frontlines are everywhere: urban Native organizing in Vancouver