On Monday December 17th at 3:30pm, Coastal GasLink gained court-ordered and RCMP escorted access to the Wet’suwet’en territory that has been reoccupied by the Unist’ot’en clan. But after the deadline passed, the gate that the Unist’ot’en Camp put up at Morice River Bridge remained closed and the Unist’ot’en retained their UN-recognized powers of free and prior informed consent protocols over access to their unceded territories. Rather than open the Morice River gate to Coastal GasLink’s pipeline construction crews, the court injunction order had the effect of redoubling the resolve of the five clans of the Wet’suwet’en nation and of Indigenous peoples and their co-fighters throughout the territories occupied by British Columbia.

The Unist’ot’en is one of five clans that make up the Wet’suwet’en nation. The news of the court injunction brought together the hereditary chiefs of all five clans, who reaffirmed their opposition to oil and gas pipelines on their territory. In a news release from December 17th, the Wet’suwet’en clans said, “While some Wet’suwet’en Indian Act Bands and corporations have signed on to the Coastal GasLink Agreement, the Wet’suwet’en hereditary leadership – who have jurisdiction over 22,000 square kilometers of traditional territories – have not given their free, prior, and informed consent to any oil or gas company to build pipelines in their lands and waters. The Wet’suwet’en hereditary chiefs have not made any agreement with the Canadian or British Columbian governments to surrender or permit access to Wet’suwet’en lands for any pipeline construction activities.” 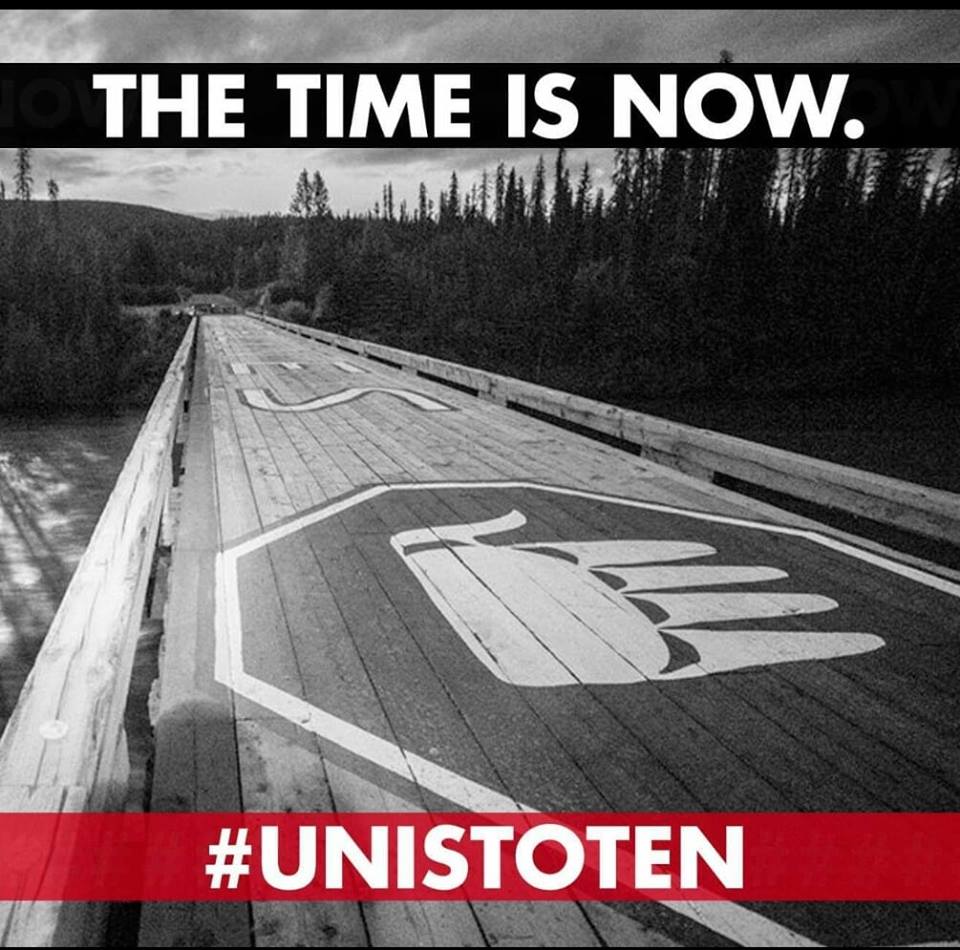 The Wet’suwet’en house and clan system predates colonialism and was also recognized by the Canadian courts in the historic Delgamuukw and Red Top Supreme Court decisions. The Delgamuukw court decision found that the Wet’suwet’en had never ceded title to 22,000 square kilometers of their territory, but Canada has since ignored this decision and continued to trespass Wet’suwet’en territory, including by approving and forcing through pipelines and resource extraction projects. Arguing that “under Wet’suwet’en law, clans have a responsibility and right to control access to their territories,” the Wet’suwet’en clan chiefs agreed by consensus to “assert control of the Gitdumden Clan territory that borders to the west of Unist’ot’en lands.” These chiefs set up a checkpoint on the Morice Lake Forest Service Road outside of but on the access route to the area covered by the court injunction. Wet’suwet’en delegates will guard this checkpoint “until further notice” to ensure that only those with free, prior, and informed consent pass.

On Tuesday December 18th, representatives of Coastal GasLink tried to deliver notice of the court injunction to the Morice River gate but were stopped and turned around at the new Gitdumden clan checkpoint. As of the morning of Thursday December 20th, both the Gitdumden clan checkpoint and the Unist’ot’en clan gate on the Morice River bridge are standing strong, harassed only by the buzz of RCMP helicopters overhead.

Meanwhile, fighters on the urban frontline also snapped to attention to defend against the injunction deadline. In Vancouver there were five actions in two days to warn the BC government against an assault on Wet’suwet’en title. On Monday afternoon, just before the deadline, three groups of urban Indigenous and non-Native solidarity activists staged a coordinated occupation of three NDP MLA constituency offices.

The last military assault on organized Indigenous land and national defence in British Columbia was at Gustafson Lake in 1995, when the RCMP attacked the Ts’peten Defenders in a month-long assault. This open conflict was also carried out under an NDP government in Victoria. Monday’s occupations raised the spectre of conflict and appealed to the NDP to back down.

A dozen Downtown Eastside community members visited Vancouver-Mount Pleasant MLA Melanie Mark’s constituency office to demand that she use her voice as an MLA and her power as a member of Cabinet to uphold the rights of the Unist’ot’en. The action came just before the injunction came into effect that would violate the rights of the Unist’ot’en clan of the Wet’sewet’en.

When the delegation was informed that Melanie Mark was in Cabinet meetings and would not be meeting with us, we unfurled a banner reading “We Stand With Unist’ot’en,” and began a sit-in in the office. Malcolm T, a board member of the Western Aboriginal Harm Reduction Society and the Vancouver Area Network of Drug Users, read our demands. During the sit-in participants shared stories, heard reports from the simultaneous occupations of George Heyman and Shane Simpson’s office, and talked politics. The constituency office staff did call the police to inform them of the sit-in, but did not ask them to come.

After two hours, we decided to leave the office to go join a solidarity action that had been called for that evening Downtown. Before leaving, we did a speak-out, and participants shared their thoughts about solidarity with the Unist’ot’en, frequently making connections to the experience of being multiply displaced as Indigenous people – from their traditional territories by the initial waves of colonialism, from reserves by the subsequent poverty and oppression and now from the Downtown Eastside by gentrification.

Parallel occupations at Shane Simpson and George Heyman’s offices found similar results. Members of Alliance Against Displacement and Bread, Roses and Hormones marched into Simpson’s office with signs and banners and managed to buttonhole him in his office. Simpson refused to receive or read the letter and called the police, so members of the delegation read the statement out loud to him while he gazed out the window waiting for the police to arrive.

The demands of the three delegations were the same; that each NDP executive council member:

1) Must commit to upholding the United Nations Declaration on the Rights of Indigenous Peoples and Anuk Nu’at’en (Wet’suwet’en laws) and collective Title.

2) Must revoke all permits associated with the $40 billion fracked gas project LNG Canada until the project respects Anuk Nu’at’en and meets the standards of FPIC under UNDRIP, the full principles of which your government has promised to abide by.

If you are unable to uphold these commitments to Anuk Nu’at’en, UNDRIP, and reconciliation, then we demand that you resign from the Executive Council of the B.C. Government.

Shane Simpson said that he expected the injunction to be enforced and the pipeline to go through, and that it was needed because of jobs. On Tuesday afternoon Melanie Mark agreed to meet with some of those who carried out these office occupations. She received the demands and, after an hour and a half long meeting, took no firm position.

Then, on Monday night there was a major solidarity march and rally in the streets of downtown Vancouver. Beginning outside the CBC building (neither the CBC nor any major media has substantially covered the threats to Unist’ot’en) about 300 people rallied and chanted. Speakers at the beginning of the march included Audrey Siegl and Cecilia Point from Musqueam, Cease Wyss from Squamish, Secwepemc leader Ida Manuel from Tiny House Warriors, and Levinia whose father was Wet’suwet’en and worked on the Delgamuukw case. In the pouring rain and whipping wind, and escorted by a heavy presence of motorcycle cops, the marchers took and blockaded the Georgia Viaduct and then the Cambie Street bridge, disrupting traffic and yelling out in defence of Unist’ot’en. Nlaka’Pamux Nation member Billie Pierre, Northern Tutchone leader Malcolm T. from WAHRS and VANDU, Nisga’a and Nuu-chah-nulth organizer Herb Varley, and Coast Salish youth leader Siem gave inspiring speeches during the march as well.

A week after Coastal GasLink was awarded its injunction to break the Unist’ot’en Camp, it is clear that the courts alone have not decided anything. The five clans of the Wet’suwet’en have stepped up and declared that this is a struggle to maintain their jurisdiction and title against corporate power and have taken action to not allow the gains of Delgamuukw to be eroded.

And at the same time, urban Indigenous people in Vancouver and elsewhere are showing, as Herb Varley, an occupier of MLA Shane Simpson’s constituency office said during the sit-in, “this is colonialism right here.” The conflict between Indigenous peoples and the Canadian state, public, and corporate interests that occupies their territories is coming to a head on the territories of the Wet’suwet’en, but the front lines are everywhere.