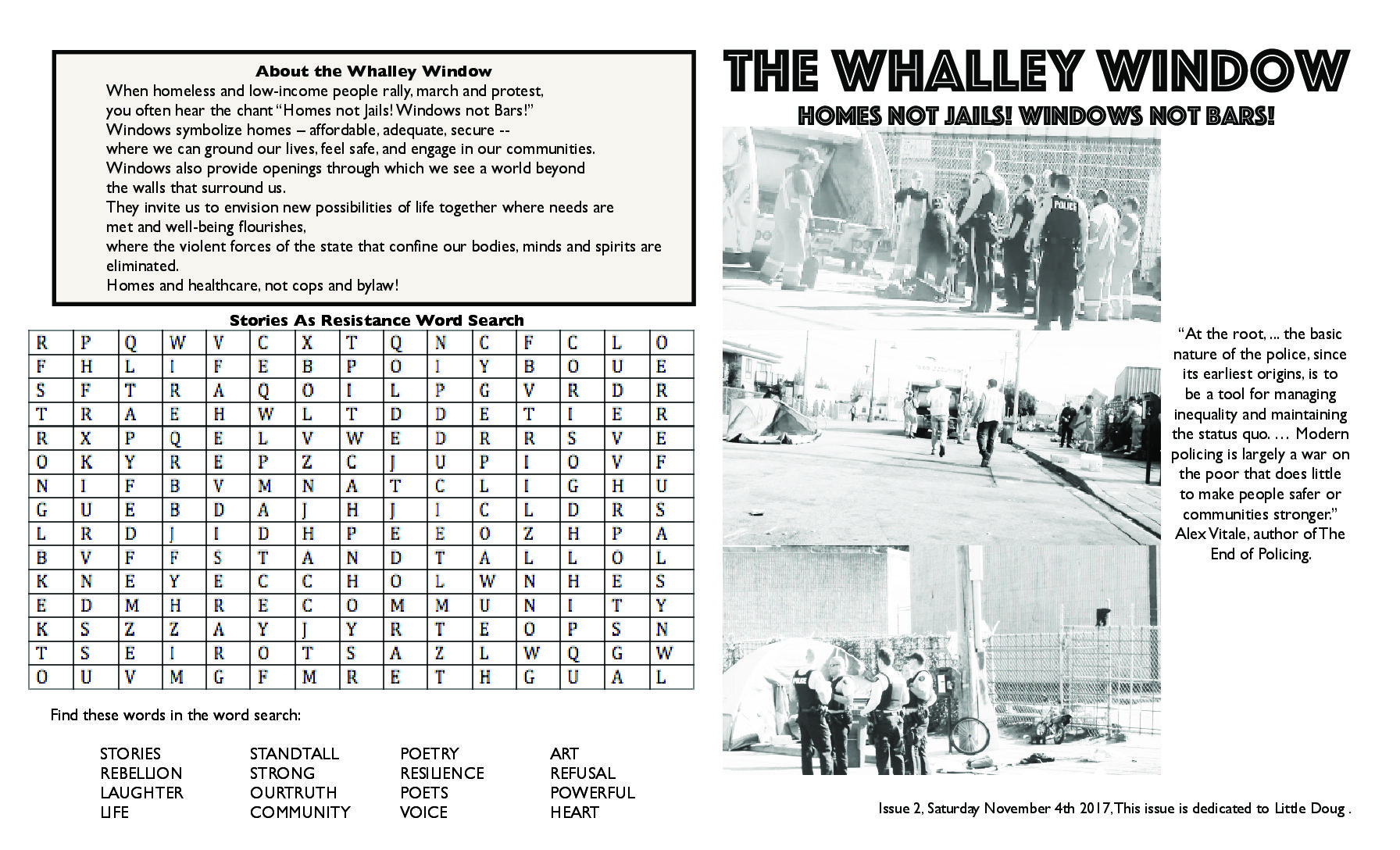 Download the PDF of The Whalley Window – Issue 2.
This issue is dedicated to Little Doug.

“At the root, … the basic nature of the police, since its earliest origins, is to be a tool for managing inequality and maintaining the status quo. … Modern policing is largely a war on the poor that does little to make people safer or communities stronger.”
Alex Vitale, author of The End of Policing.

This summer Surrey City Councillor Tom Gill spoke with Surrey Now-Leader journalist Amy Reid about the situation on 135A Street. He said that the city has taken a “humanitarian” approach to the homeless crisis on the strip by providing an outreach team of police officers, bylaw officers and support workers to monitor people living there. He thinks shelters are the solution to homelessness and expects the new provincial government will provide resources for more shelter spaces.
Gill also feels that some people who live in tents on the strip are not co-operating with this “humanitarian approach.” He says “some people living on the street won’t take a home, even when it is offered to them.” According to Gill, “[t]here comes a time that being a little more forceful in terms of having mandatory engagement and expectations from the street folks…is what would be expected.” He calls this ‘tough love.’

In the article it becomes clear that Tom Gill’s priority is the business community and nearby property owners. He wants to make sure that there is a “balancing of ‘community deliverables’ from a business perspective but also for residents who live nearby.” He threatens to “up the game” for those who do not want to comply with going into shelters when they become available. He even goes “on record” to say he does not want the Strip in his backyard and that his “patience is wearing really thin” with the lack of progress in moving people off the strip.

“Humanitarian” approach? You’ve got to be joking!
By The Whalley Window Team

In George Orwell’s book Nineteen Eighty-Four, “doublespeak” referred to the way words were used to mask the truth; war is called “peace” and lies are designated “truth”. It seems that “doublespeak” has now seeped its way into Surrey municipal politics.

The RCMP’s routine practices of containment, coercion and surveillance and Bylaw’s normalized harassment and theft inflicted on homeless people living on the Strip are constructed as a “humanitarian approach” by acting mayor Tom Gill. His solution to the housing crisis visible on 135A (the province’s only outdoor shelter/prison run by cops) is not actual housing but permanent shelters, which are nothing more than homelessness under a roof. The regular rituals of dehumanization, such as forcing people to take down their tents each morning, pack up and move their belongings for the weekly theatrics of power-washing the street, and endure a myriad of daily orders and interrogations, are too “humanitarian” and not forceful enough for Gill; people living on the Strip should also be forced into inadequate shelters under a policy of “tough love”.
There is some truth that shines through Gill’s doublespeak, however; the City’s efforts to impose these oppressive measures on homeless people serves the interests of businesses and property owners in the area as Whalley undergoes full-scale gentrification.

As a society, we are in deep trouble when “outreach” means “enforcement”, dehumanizing practices of containment and control are called “humanitarian”, and obvious disdain and hatred is called “love.”