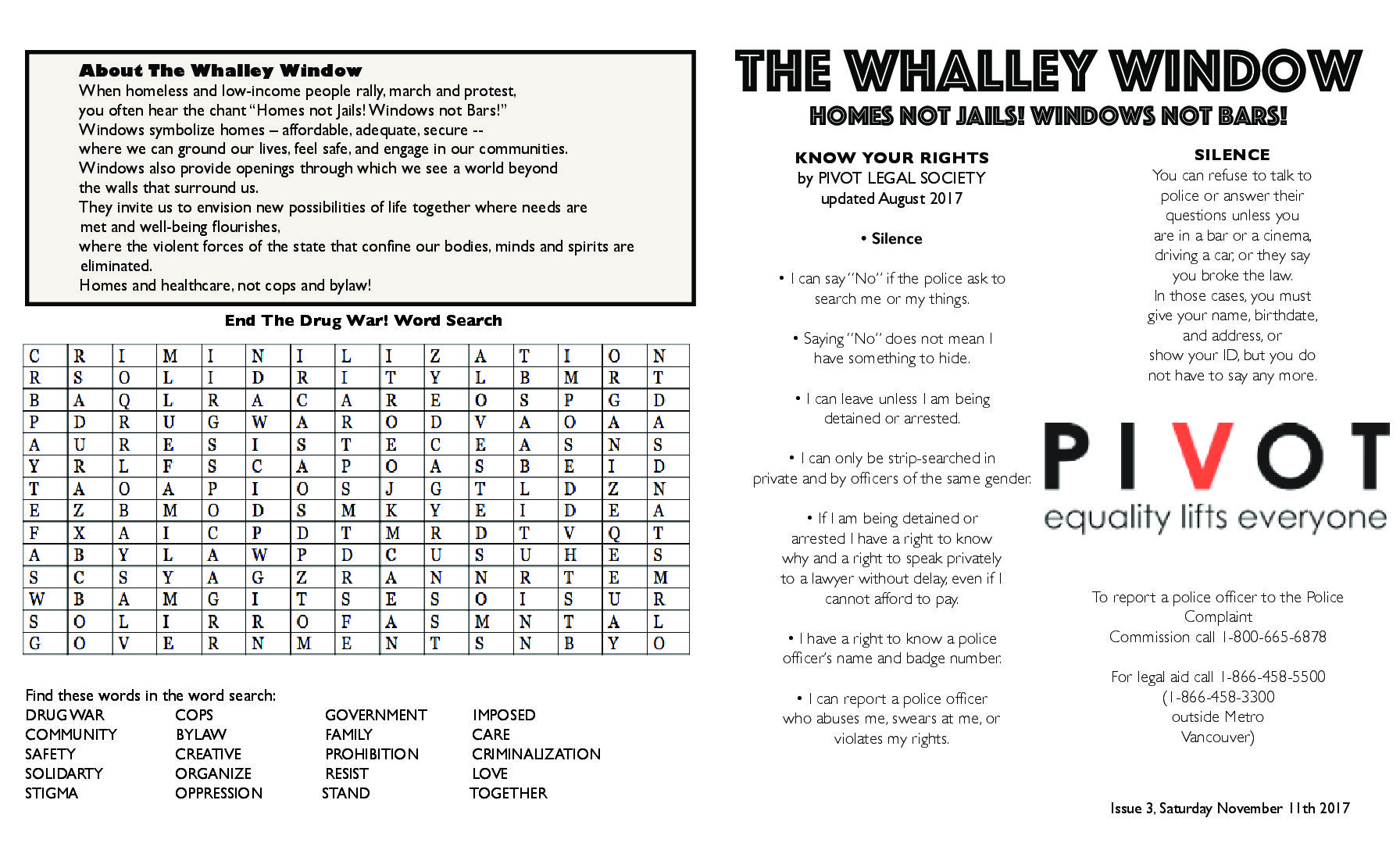 Voices from the Strip
Laura-Lin Melonson

It’s cold on the strip these days and it can get lonely. It’s boring too sometimes. You have to watch out for cops and bylaw; they wake you up every morning and make you take down your tent and do what they say; and if you don’t, you get your tent taken away and everything thrown away in the garbage. It happened to me. I wasn’t there one morning – I was only a minute away – and they started throwing all my stuff in the garbage. They didn’t get to throw my tent away but they threw away all my stuff around my tent.

When it’s really cold out, it’s hard to stay warm. You can’t have a candle, you can’t have a heater. Three weeks ago I fell asleep with my candle lit trying to keep warm and the inside of my tent caught on fire. It was horrible. As I was trying to put it out, melted plastic was dripping on my head. It was really bad.

The police taunt you and bug you; they make you feel like you’ve done something wrong when you haven’t done anything wrong. They’re just ignorant. They say they are just doing their jobs, but their job is not picking on people, making people feel that they don’t belong.

I think Wanda was arrested because she had a voice and she wasn’t afraid to use it. She was a strong advocate for the community from the street level. We have rights, and she let people know that we do have rights; she wasn’t afraid. A couple weeks ago I told Wanda that I can’t live on the strip any more, I can’t do it; it’s killing me. She said to me “Just a little bit longer, a little bit longer. Hold on and stay strong. Everything will come together.” We have to keep up the fight. We can’t let them win.

Lest We Forget
By The Walley Window Team

“If you’re game, we’ll go and take it over now!”, said WWII veteran Bob McEwen during a rally in 1946, at the beginning of the occupation of the old Hotel Vancouver. A sudden surge of Canadian
soldiers returning from the war caused a housing crisis in postwar Vancouver. The soldiers found themselves abandoned by their own government in the name of corporate profits; they were back home but without a home.

The old hotel Vancouver was used for military offices and barracks during the war and was about to be sold and torn down. McEwen and 30 veterans marched into the hotel, setup an occupation
committee and ran the place without approval from any authorities other than themselves. They ran it successfully for a good couple of years, until finally permanent housing was built for them. Today many of us are abandoned by our government, not because we didn’t want to contribute to the society, but because corporate profits and city revenue are more important than homes for people. The bravery of these 30 men and women who fought for housing back in the winter of 1946 can inspire us all in the current fight for dignified homes for all who need it.

About The Whalley Window

When homeless and low-income people rally, march and protest, you often hear the chant “Homes not Jails! Windows not Bars!” Windows symbolize homes – affordable, adequate, secure – where we can ground our lives, feel safe, and engage in our communities. Windows also provide openings through which we see a world beyond the walls that surround us. They invite us to envision new possibilities of life together where needs are met and well-being flourishes, where the violent forces of the state that confine our bodies, minds and spirits are eliminated. Homes and healthcare, not cops and bylaw!