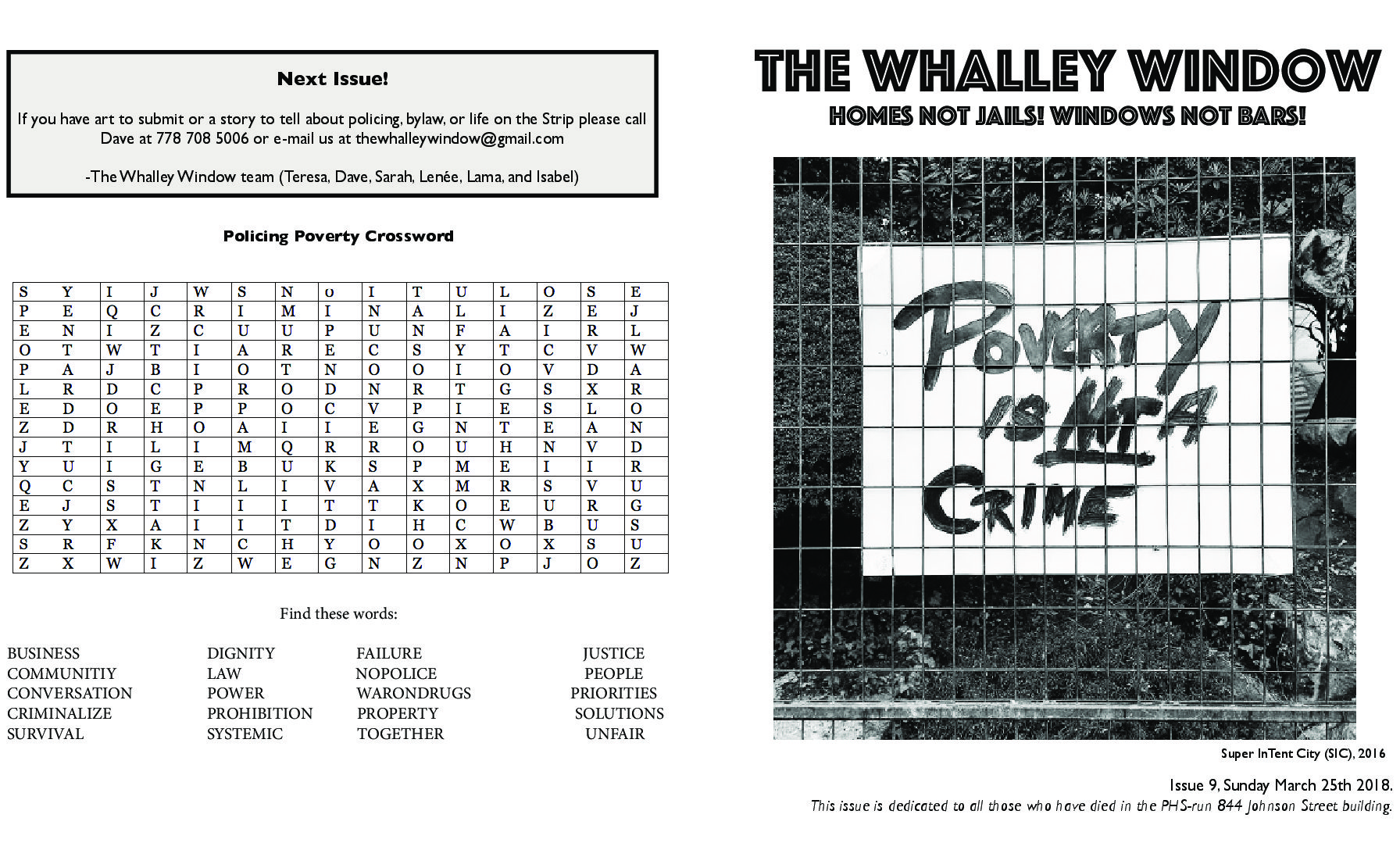 Download the PDF of The Whalley Window – Issue 9.
This issue is dedicated to all those who have died in the PHS-run 844 Johnson Street building.

The Fight for Dignified Housing : The Super InTent City Story
By SIC Society

Beginning in November 2015, close to 150 people found security, safety, community, and political power at Super InTent City (SIC), the tent city on the courthouse lawn in Victoria. After 10 months, we were moved into Portland Hotel Society (PHS) run “supportive” housing. Here is our story.

Tent city brought a bunch of people together that in any other circumstances would have never even talked to each other let alone become a family intent on helping each other. While people across Canada were dying from overdose at record numbers, tent city had not one death; we didn’t let one person get taken by this killer. This was one thing in the list of many that helped begin to mold a community. People put aside their differences and dealt with them in a manner that suited the unwritten rule, “leave problems at the gate.” Everyone knew that we were all there to resolve our main issue of housing.

When things started coming together for us through the courts, PHS decided to show up. They came into the tent city and while handing out food and bottled water, began to put the bug in our ear. They kept drilling into our heads that we were gonna get special treatment if we moved into their housing. The main thing that made us agree to move in was the fact that we would be under the RTA, Residential Tenancy Act, that there would be a no eviction policy, and that under no circumstance would the cops be getting called to deal with any of the problems that arose due to peer issues or staff/peer interaction.

“While people across Canada were dying from overdose at record numbers, tent city had not one death”

Most of us moved from tent city to the PHS run- housing on Johnson Street in August, 2016. We made the obvious mistake of not doing background research on who we were jumping into bed with. We fell for it hook, line and sucker!! PHS and the cops were quite open about having a good working relationship, and they called the cops for absolutely any reason possible. They had the whole place wired for sound and video making us feel a lot less human. They went back on their promise that it would be an RTA building and started calling it a “housing based medical facility” so we had no rights as renters. Our agreements with management were thrown out the window including peer appointed and delegated reps to help with daily operations and settling conflict between peers and staff. Instead we were told that none of this was needed and even worse that none of this had been discussed.

We quickly realized after moving into Johnson Street that we had made a mistake, and we knew that by the steady police traffic we had been sold out by this management team. The physical and mental health benefits that we gained at tent city were soon reversed. There have been at least 12 deaths in the PHS building since we’ve moved in. Many of the original inhabitants have been evicted, face charges laid by PHS, and are back out on the street.

We have formed SIC Society to continue to fight for the rights of homeless people to get housing. We believe that all humans should be treated with respect whether they have a place to live or not. The fight for dignified housing is not over!