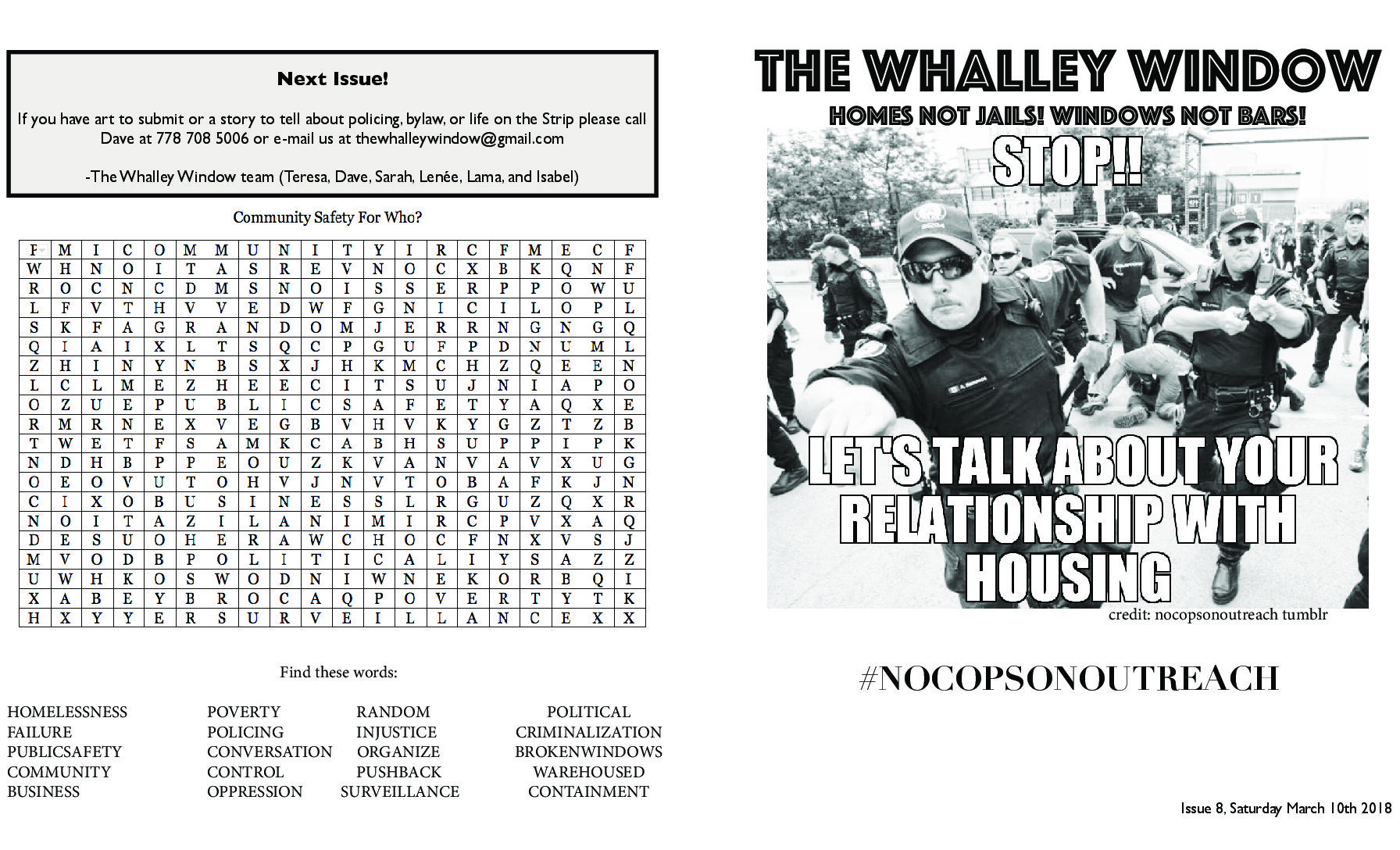 Homelessness and poverty are not the result of random personal misfortune, psychological breakdown, moral failure, or bad decision-making by individuals. They stem from the government’s failure to distribute our collective wealth in ways that support the life and health of everyone equally. Political leaders enact policies that serve the interests of the rich, bending the rules of the game in their favour, and cutting back on resources and social services for employed and unemployed working-class people.

When those who are forced to endure conditions of poverty and premature death find ways to survive outside of the dominant economic system, they are criminalized. Panhandling, binning, low-level drug dealing, sex work, and petty theft are all illegal and people who engage in these survival strategies are subject to fines, arrest and/or imprisonment. Even activities such as loitering, urinating in public, street vending, and graffiti are viewed as “nuisance crimes” or “quality of life” offences that undermine public safety and so are targeted by police.

In the 1990s in New York City, police chief William Bratton implemented the “broken windows” theory of policing that was developed by George Kelling and James Wilson in the early 80s. The theory is that if “nuisance crimes” are left unattended or neighbourhoods are allowed to deteriorate, this will lead to more serious crimes. Going after minor offences meant aggressively policing poor and working class neighbourhoods and led to the increased criminalization and punishment of survival. Under the banner of “public safety” and “tough-on-crime” politics, visible poverty was surveilled, contained and punished.

So while political, economic and legal systems create the conditions for homelessness and poverty, the state uses police, bylaw, private security, and service workers to impose a social order that benefits businesses and property owners. The “broken windows” strategy of policing poverty is supported by Business Improvement Associations (BIAs) across the region. In fact, the Downtown Vancouver BIA states explicitly that it subscribes to this philosophy of policing because it produces “well managed neighbourhoods” and improves customer happiness and economic investment.

The Strip is a concentrated space of homelessness and poverty, and a site of intense policing, surveillance, containment and social control. It is also an area on the verge of massive property development and business expansion. Soon people living on 135A will be forcibly removed and warehoused in used construction trailers to make way for the City’s gentrification plan.

But don’t be fooled – even after being placed into “transitional housing” low-income folks will still be policed by cops, bylaw and social workers, so that they don’t get in the way of developers and entrepreneurs investing their capital in the area, and wealthy professionals spending their disposable incomes. We need to push back against this kind of state oppression and injustice, by sharing our experiences and knowledge, and organizing our community to take action.