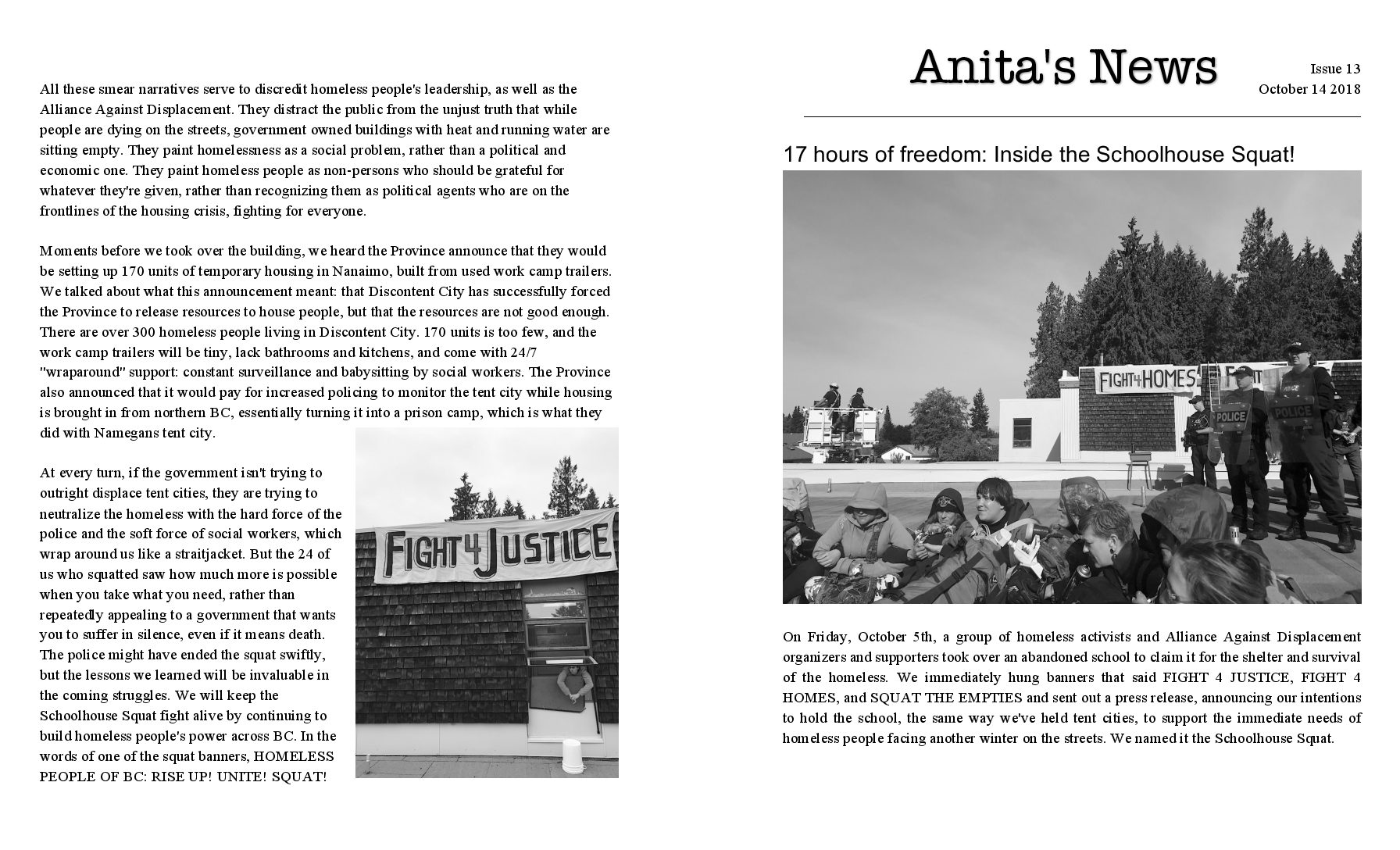 All these smear narratives serve to discredit homeless people’s leadership, as well as the Alliance Against Displacement. They distract the public from the unjust truth that while people are dying on the streets, government owned buildings with heat and running water are sitting empty. They paint homelessness as a social problem, rather than a political and economic one. They paint homeless people as non-persons who should be grateful for whatever they’re given, rather than recognizing them as political agents who are on the frontlines of the housing crisis, fighting for everyone.

Moments before we took over the building, we heard the Province announce that they would be setting up 170 units of temporary housing in Nanaimo, built from used work camp trailers. We talked about what this announcement meant: that Discontent City has successfully forced the Province to release resources to house people, but that the resources are not good enough. There are over 300 homeless people living in Discontent City. 170 units is too few, and the work camp trailers will be tiny, lack bathrooms and kitchens, and come with 24/7 “wraparound” support: constant surveillance and babysitting by social workers. The Province also announced that it would pay for increased policing to monitor the tent city while housing is brought in from northern BC, essentially turning it into a prison camp, which is what they did with Namegans tent city.

At every turn, if the government isn’t trying to outright displace tent cities, they are trying to neutralize the homeless with the hard force of the police and the soft force of social workers, which wrap around us like a straitjacket. But the 24 of us who squatted saw how much more is possible when you take what you need, rather than repeatedly appealing to a government that wants you to suffer in silence, even if it means death. The police might have ended the squat swiftly, but the lessons we learned will be invaluable in the coming struggles. We will keep the Schoolhouse Squat fight alive by continuing to build homeless people’s power across BC. In the words of one of the squat banners, HOMELESS PEOPLE OF BC: RISE UP! UNITE! SQUAT!

17 hours of freedom: Inside the Schoolhouse Squat!

On Friday, October 5th, a group of homeless activists and Alliance Against Displacement organizers and supporters took over an abandoned school to claim it for the shelter and survival of the homeless. We immediately hung banners that said FIGHT 4 JUSTICE, FIGHT 4 HOMES, and SQUAT THE EMPTIES and sent out a press release, announcing our intentions to hold the school, the same way we’ve held tent cities, to support the immediate needs of homeless people facing another winter on the streets. We named it the Schoolhouse Squat.

Within minutes, cops arrived and marked the entire school grounds a crime scene, preventing supporters, media, and additional Discontent City residents from joining the squat. A crowd of anti-homeless bigots, later joined by the white supremacist gang Soldiers of Odin, gathered on the other side of the police tape to yell misogynistic, poor-bashing threats at the squatters. Dwayne yelled back, “you idiots! We’re fighting for you!”. The bigots yelled the same unimaginative, vapid things they usually do: get a job, get out of here, you’re all criminals and drug addicts, etc. But as the night fell we went inside and cleaned up rooms, made art, cooked, and ate dinner together as a community. It felt like the best parts of tent city: collective power, organization, and community, but even better, because we were under a roof with electricity, running water, and warmth.

Our reasoning behind the squat was that it is unjust for government owned buildings to sit empty, with running water, heat, and electricity, while people are dying in the streets. Just like tent cities, the Schoolhouse Squat sought to make a political and legal claim. Since the courts have acknowledged that tent cities increase homeless people’s wellbeing by providing support, safety, and community, but have also insisted that living in a tent is a fire hazard, we felt that taking over a building would allows us to argue that all the pros of tent cities were present, without the cons of living outdoors. But we didn’t get a chance to take that argument to court, because the government and the police came down fast and hard to stop us.

The morning after we took the building, the Soldiers of Odin returned. They cheered as the police brought in dozens of cops wearing military outfits and carrying assault rifles to raid the peaceful squat. We gathered on the roof and decided that we would all peacefully resist the police. We sat in a circle with our backs to the bigots, our arms linked, chanting in unison, “HOMES NOT HATE! FIGHT FOR JUSTICE, FIGHT FOR HOMES! THE PEOPLE UNITED WILL NEVER BE DEFEATED!”. When the cops finally made it onto the roof, they had to pull each of us from the circle one by one, and then take us down one by one in a cherry picker that the fire department brought. Although our 17 hours of freedom was ending, spirits were high and we felt unified, strong, and invigorated by what we experienced inside the school.

In jail, people were denied methadone, food, and water. Some of us were released with extreme bail conditions that are usually reserved for gang members, and all of us were given the overblown charge of breaking and entering with intent. The state’s quick shutdown of the squat indicates that the government wants to crush any kind of organized homeless resistance. The message is: if you’re quiet about your homelessness, we’ll ignore you. But if you band together and agitate for justice, we’ll sic the cops on you so that we don’t have to deal with your demands.