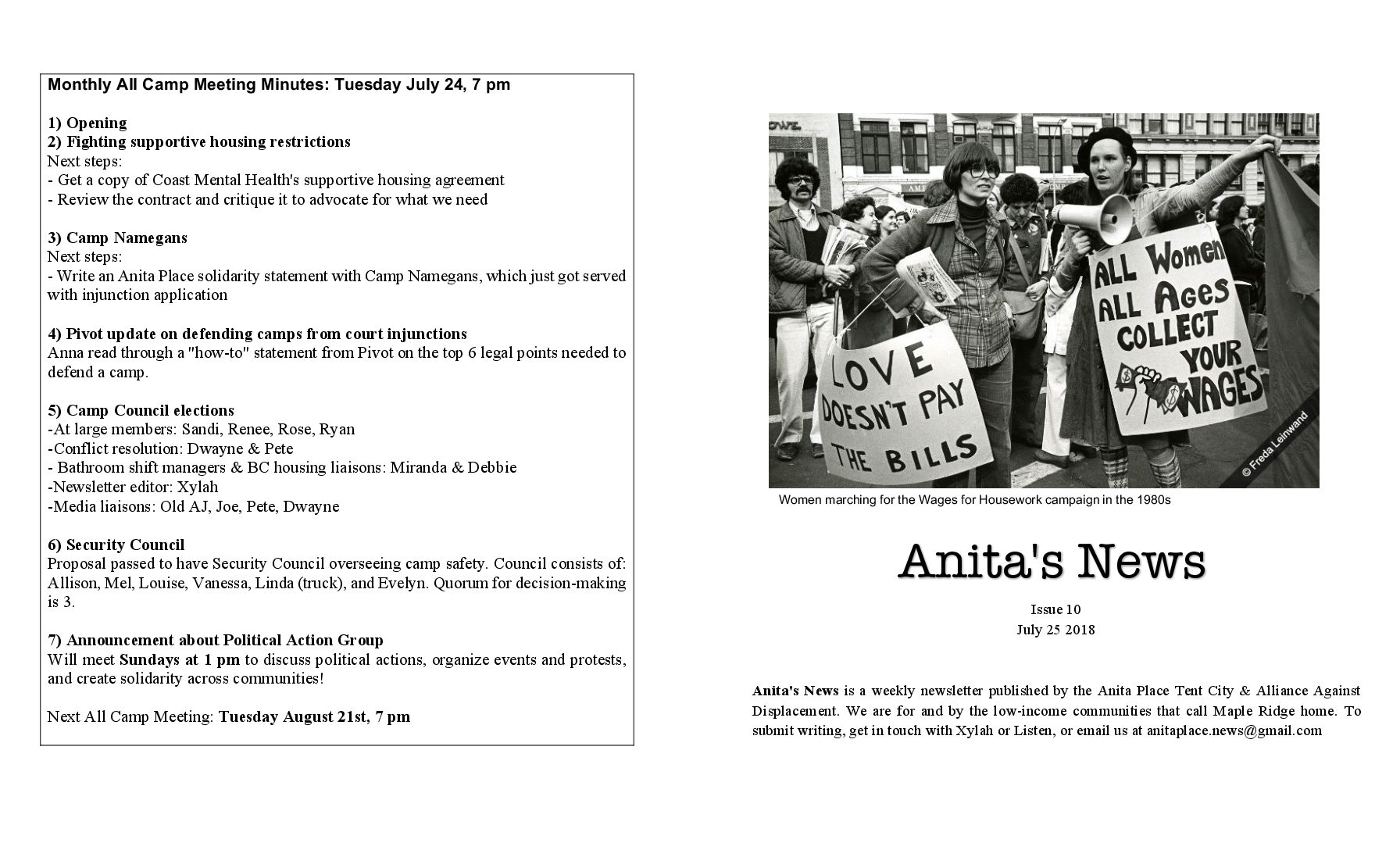 Anita’s News is a weekly newsletter published by the Anita Place Tent City & Alliance Against Displacement. We are for and by the low-income communities that call Maple Ridge home. To submit writing, get in touch with Xylah or Listen, or email us at anitaplace.news@gmail.com

Women and men should stand together against patriarchy!

Women of Anita Place are serving notice! We have started a weekly women’s group to discuss our experiences and how we can support each other, as well as the tent city, to keep fighting back against anti-poor, patriarchal hatred.

As women, we feel like we are constantly on guard, unable to relax, without any privacy, and worried about getting hurt. We are done taking shit from men who disrespect us and threaten us. We do not need men to step in and threaten violence with more violence; we need men to take a step back. If we keep fighting chauvinism with bigger, stronger chauvinism, we will never feel safer or stronger as a community. We are ready to back each other up and create bonds that make every woman in tent city feel supported.

Men are told that being a “man” means providing for your family and dominating women and other men. When men feel like they are failing to live up to the standards imposed on them by our capitalist, colonial, and patriarchal society, many cope by externalizing their anger and humiliation as violence, which targets women. This show of power does nothing to address the root causes of why working class and Indigenous men are frustrated and hopeless – it only displaces their frustration. In other words, rather than beat down the cop or the boss who makes him feel worthless, men turn around and beat down their girlfriends, wives, and children. We can fight patriarchy by realizing how it oppresses everyone, but especially women who are already more vulnerable to violence and marginalization—homeless women, trans women, Indigenous women, racialized women, and women who engage in sex work.

We live in a fucked up world, and coping with that by hurting or disrespecting one another only weakens us. Anita Place has enough enemies outside of the camp: cops, City Council, and Ridgilantes. The stronger our relationships are within the tent city, the stronger the entire tent city is.

In order to stay strong, we need to stop bullying and threatening one another. No more violence against women, and no more leaving it up to the biggest bully to determine what goes. What we need is a democratic structure to govern our entire community, so that everybody feels more safe and like they have a voice. As women we feel committed to helping govern Anita Place democratically, but we need all camp residents, men and women, to commit to a shared vision of a healthy and strong tent city. We believe that homeless men have as much to gain as we do by rejecting the narratives of what it means to be a “successful” man or woman – clearly, as poor and homeless people, we have already failed in the eyes of broader society.

But we are not failures from our perspective: we have banded together and fought back, proving to ourselves and to homeless people around the province that we can self-organize and determine our own fates. This spirit of togetherness has pushed back against cop, bylaw, and government hatred; we can also use it to push back against patriarchal violence within and outside of the camp. Men: you have as much to gain as we do by saying “no more!” to violence against women. Women: we are important leaders and contributors to tent city, let’s make sure that we support one another to keep building on our capacities!