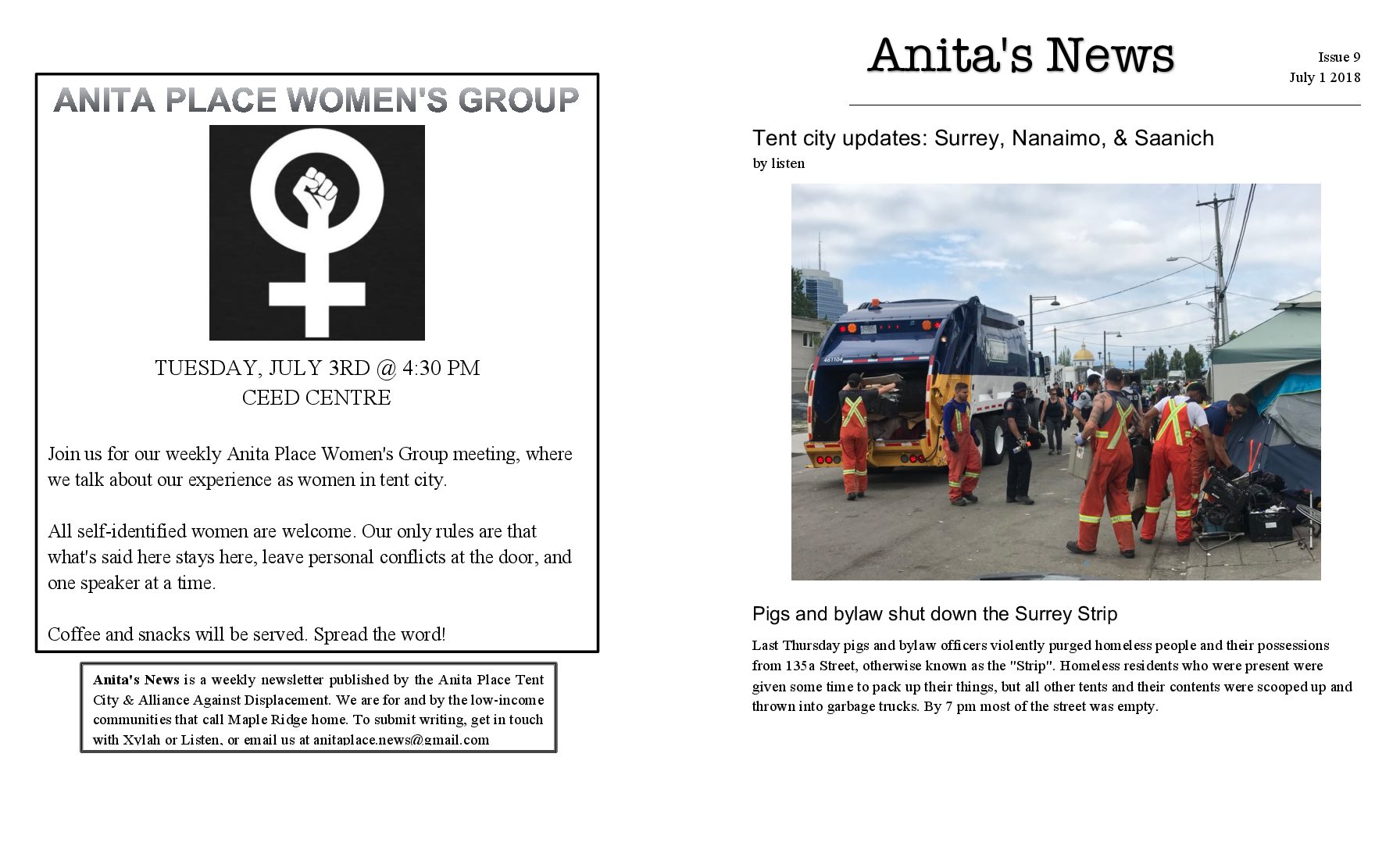 Pigs and bylaw shut down the Surrey Strip

Last Thursday pigs and bylaw officers violently purged homeless people and their possessions from 135a Street, otherwise known as the “Strip”. Homeless residents who were present were given some time to pack up their things, but all other tents and their contents were scooped up and thrown into garbage trucks. By 7 pm most of the street was empty.

The purging of the Strip was prompted by the opening of 160 supportive modular housing units. While some Strip residents are happy to take whatever shelter they can get after living in an open air prison for three years, there were more people staying on the Strip than 160 modular units can support, and hundreds more homeless throughout the city of Surrey. Dave Diewert, an Alliance Against Displacement organizer in Surrey, estimates that there are at least 1,200 homeless people living in Surrey. In clearing out the Strip to prepare for the gentrification of downtown Surrey, the RCMP and the City have made clear that they want the other 1,000 homeless people who won’t be living in supportive emergency housing to remain invisible. A bylaw officer told Bonnie, a long-term resident of the Strip, that homelessness would be “illegal” after the Strip’s purge.

Last year at Alliance Against Displacement’s annual general meeting, Surrey Strip residents met Anita Place and Sugar Mountain Tent City residents and brainstormed what it would look like to start a self- organized tent city somewhere in Surrey. Maybe the announcement of a handful of non-profit and social worker controlled housing in Surrey marks a new turn in homeless people’s struggle there. Whatever happens, solidarity across different regions is crucial. From Nanaimo to Maple Ridge to Victoria to Surrey, poor, working class, and Indigenous people are fed up with the police and bylaw violence, the government’s refusal to build tenant-controlled & welfare-rate social housing, and anti-homeless hatred from their broader communities.

Last week the City of Nanaimo served Discontent City with an injunction application. Organizers anticipated that after failing to displace the camp with police and bylaw intimidation, that the City would turn to the courts, thereby giving tent city residents a chance to defend themselves before a judge. Similar to the City of Maple Ridge’s attack on Anita Place Tent City, the City of Nanaimo is attempting to argue that Discontent City is a nuisance to surrounding businesses, a health hazard, and composed mostly of people who are not from Nanaimo and have only set up the camp to protest, rather than survive.

With the help of other homeless activists who have experience organizing in Anita Place, Sugar Mountain, and Ten Year Tent Cities, the residents and organizers of Discontent City are fired up and ready for the battle ahead. A day in court is a victory but it can be easy to forget that it’s not the law that gives us power, it’s standing together outside of the law.

Namegans is B.C.’s newest tent city, located just north of Victoria, in Saanich. While it started off as a pop up protest camp, it has since grown and established itself as a self-organized tent city, with a council and weekly meetings, just like Anita Place. Crissy Brett, the camp’s founder, explains, “I was taken in the 60s scoop and I have Anishinaabe, Cree, Mohawk teachings. Do they expect me to go back to those territories to practice my culture? Where do we practice our culture and ceremonies when 50% of Indigenous people live off reserve?”