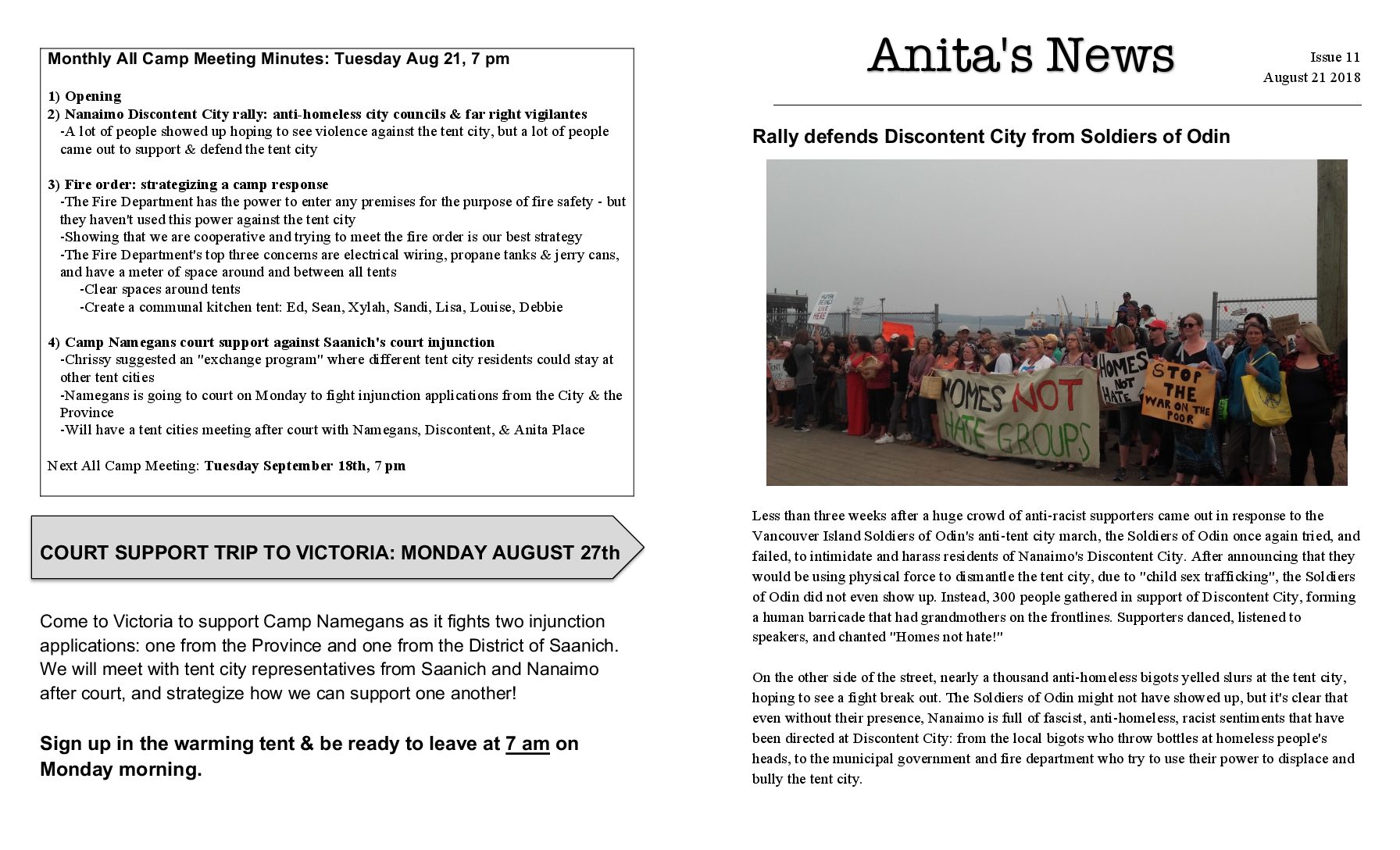 Come to Victoria to support Camp Namegans as it fights two injunction applications: one from the Province and one from the District of Saanich. We will meet with tent city representatives from Saanich and Nanaimo after court, and strategize how we can support one another!

Less than three weeks after a huge crowd of anti-racist supporters came out in response to the Vancouver Island Soldiers of Odin’s anti-tent city march, the Soldiers of Odin once again tried, and failed, to intimidate and harass residents of Nanaimo’s Discontent City. After announcing that they would be using physical force to dismantle the tent city, due to “child sex trafficking”, the Soldiers of Odin did not even show up. Instead, 300 people gathered in support of Discontent City, forming a human barricade that had grandmothers on the frontlines. Supporters danced, listened to speakers, and chanted “Homes not hate!”

On the other side of the street, nearly a thousand anti-homeless bigots yelled slurs at the tent city, hoping to see a fight break out. The Soldiers of Odin might not have showed up, but it’s clear that even without their presence, Nanaimo is full of fascist, anti-homeless, racist sentiments that have been directed at Discontent City: from the local bigots who throw bottles at homeless people’s heads, to the municipal government and fire department who try to use their power to displace and bully the tent city.

Last week the City failed to gain the court’s approval to use police brutality to punish residents for failing to comply with its unreasonable fire order, leaving a gap in violence that the Soldiers of Odin tried to fill. Discontent City residents have pointed out numerous times that government’s treatment of them normalizes hatred and violence, which local residents then take it upon themselves to perpetuate. The hundreds and hundreds of bystanders who showed up in the hopes of seeing homeless people beaten is a testament to how persistent anti-homeless hatred is.

The good news is that white supremacist fascists like the Soldiers of Odin are failing to intimidate homeless people. With every rally that Discontent City calls, the show of people power says to the City of Nanaimo that fascism is unwelcome there. Why are the Soldiers of Odin so fixated with the tent city? Because their racist, anti-immigrant, anti-Indigenous ideology holds up the straight, white, nuclear family as the building block of a settler-colonial nation. Anybody who fails to fit into this straight, white, nuclear, housed family is then seen as a threat: from homeless people, to queer people, to racialized people, to refugees and immigrants.

There is still a long battle ahead against fascists in BC, and tent cities have been the frontlines of this battle. Let’s keep supporting one another and showing up whenever haters try to intimidate vulnerable communities!

Our Neighbors: Christian and the CEED Centre

The CEED Centre is a non-profit society, Neighborhood House, community garden, and drop-in community center committed to sustainable living. The Centre was started in 1984 and took over the house next door, which used to be a schoolhouse, in 1990. Christian is the Centre’s Executive Director. Fun fact: Christian is fluent in Japanese!

What excites you most about your work at the CEED Centre? What populations do you serve or offer a meeting space to (aside from the Anita Place Women’s Group!)?

C: The ability to connect people to the community is probably the biggest pleasure – people that are newer to the community or haven’t been active in community life can come here and learn a little bit about what we do. We’re connected to all sorts of other organizations. So if you’re eager and interested you can kind of ease into community life. I took this job as a way to get to know the community – I was working off my property for my first three years here and never set foot off it. So I took this part-time job 14 years ago and it became a big obsession!

We bring people together: if somebody has an idea, we can make that happen. Someone wanted to volunteer but didn’t want to do gardening, they liked art therapy, so we started an art-focused group five or six years ago. Our seniors group was similar: someone wanted to volunteer, but her partner had Alzheimer’s so she had some constraints, so we started a seniors group.

We started community discussions nine or ten years ago, as a response to homelessness, addiction, and neighborhood issues. So that hasn’t changed in a decade.

What do you think needs to happen in Maple Ridge?

I think there’s a lot of reconciliation we need to do in this community, amongst all members of it. It would be nice if Anita Place, and the issues associated with it, were a catalyst for that conversation. There’s some specific work we can do after the work of Jim Dyers, who instead of looking at people as liabilities, you switch lenses and go, what assets does this person or this group have that we can mobilize to change our community for the better? It’s been done in lots of places with conditions that are even worse than in Maple Ridge, so it’s doable. It takes will, interest, and people who are willing to see a different point of view.

If you have people living on the street or in the woods, then why don’t you, as people living in houses, recruit them to keep the neighborhood in good order, instead of shooing them away, find out what they need and help them cooperatively.

What do you look for in a good neighbor?

A good neighbor looks out for the interests of their neighbors: you take care of each other. If you see a need you help fill it. Being friendly is really important, being welcoming. And it’s the little things.

There’s a lot of talent and skills and knowledge in the people in Anita Place, and if there’s any way we can help to mobilize those or create programs, that would be interesting, we’d be quite willing to talk and see what we can do together!