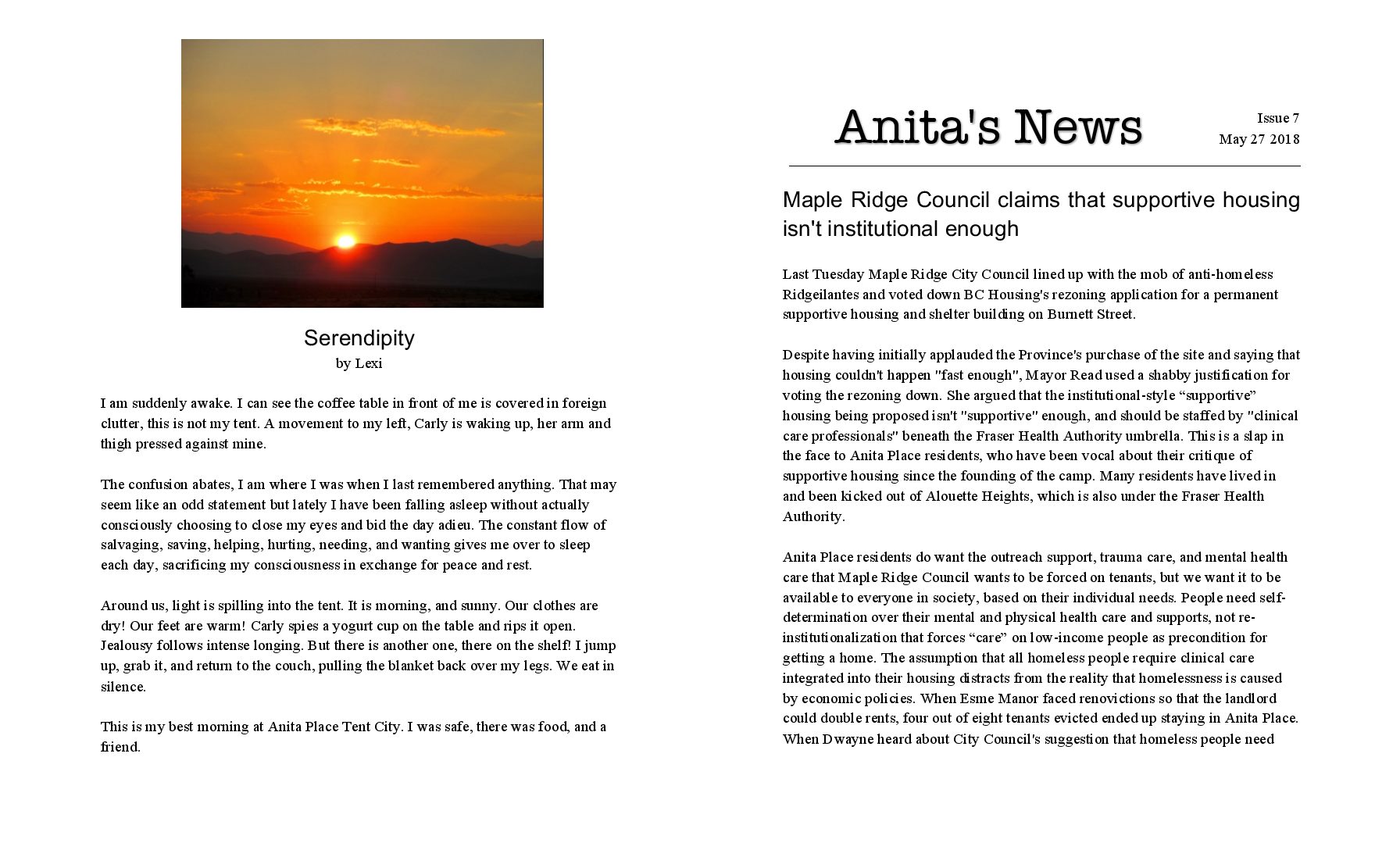 Last Tuesday Maple Ridge City Council lined up with the mob of anti-homeless Ridgeilantes and voted down BC Housing’s rezoning application for a permanent supportive housing and shelter building on Burnett Street.

Despite having initially applauded the Province’s purchase of the site and saying that housing couldn’t happen “fast enough”, Mayor Read used a shabby justification for voting the rezoning down. She argued that the institutional-style “supportive” housing being proposed isn’t “supportive” enough, and should be staffed by “clinical care professionals” beneath the Fraser Health Authority umbrella. This is a slap in the face to Anita Place residents, who have been vocal about their critique of supportive housing since the founding of the camp. Many residents have lived in and been kicked out of Alouette Heights, which is also under the Fraser Health Authority.

Anita Place residents do want the outreach support, trauma care, and mental health care that Maple Ridge Council wants to be forced on tenants, but we want it to be available to everyone in society, based on their individual needs. People need self-determination over their mental and physical health care and supports, not re-institutionalization that forces “care” on low-income people as precondition for getting a home. The assumption that all homeless people require clinical care integrated into their housing distracts from the reality that homelessness is caused by economic policies. When Esme Manor faced renovictions so that the landlord could double rents, four out of eight tenants evicted ended up staying in Anita Place. When Dwayne heard about City Council’s suggestion that homeless people need more institutionalized supportive housing, he asked, “Why’d they close down Riverview then?”

Equating homelessness with crime or pathologizing poverty as originating in the bodies of low-income people not only denies the social and economic causes of poverty, but justifies the policing, surveillance, and control of poor people. Mama Bear, who lives in Alouette Heights but keeps a tent at Anita Place, spoke passionately to the conditions she faces there: “I already live in a jail cell. That’s why I’m helping people here, because I don’t want people to end up in a jail cell without a say in anything. It’s bullshit.”

Xylah echoed the sentiment that City Council is gesturing at drug use, mental health, and disability in order to confuse the fundamental issue of providing dignified housing: “They’re blurring the issue… we are not in need of hospitalization, we just need homes.” She pointed out the double standard that the government applies to people on the basis of their economic security: no one assumes that people living in apartment buildings are in constant need of intervention by social workers and medical professionals but the moment they are evicted to the street, they become objects to control. Xylah insisted that the people at Anita Place are capable of making their own decisions, including whether or not to seek out care of any kind. “If we want to get help, we’ll get help. And we’ll probably be more willing to and more in a position to make that decision when we get to stop worrying about where we’re going to live.”

Anita Place is angered but not surprised that yet again, Maple Ridge City Hall has served as a site where anti-poor bigotry is normalized and homeless people are sentenced to social and economic exclusion. Anita Place Tent City is a model for a self-governed low-income community that has successfully fought government attempts to break up the camp, and has continued to assert its autonomy and self-determination against efforts by BC Housing to take control over the camp. In September 2017, Anita Place released a plan for a self-determined social housing building, shelter, and health care centre that, so-far, the state has refused to acknowledge. Both the City and Province are ignoring direction from those most affected and following prescriptions for housing from anti-homeless bigots.

I am suddenly awake. I can see the coffee table in front of me is covered in foreign clutter, this is not my tent. A movement to my left, Carly is waking up, her arm and thigh pressed against mine.

And Tthe confusion abates, I am where I was when I last remembered anything. That may seem like an odd statement but lately I have been falling asleep without actually consciously choosing to close my eyes and bid the day adieu. The constant flow of salvaging, saving, helping, hurting, needing, and wanting gives me over to sleep each day, sacrificing my consciousness in exchange for peace and rest.

Around us, light is spilling into the tent. It is morning, and sunny. Our clothes are dry! Our feet are warm! Carly She spies a yogurt cup on the table and rips it open. Jealousy follows intense longing. But over there is another one, there on the shelf! I jump up, grab it, and return to the couch, pulling the blanket back over my legs. We eat in silence.

This is my golden memory, my best morning at Anita Place Tent City. I was safe, there was food, and a friend.