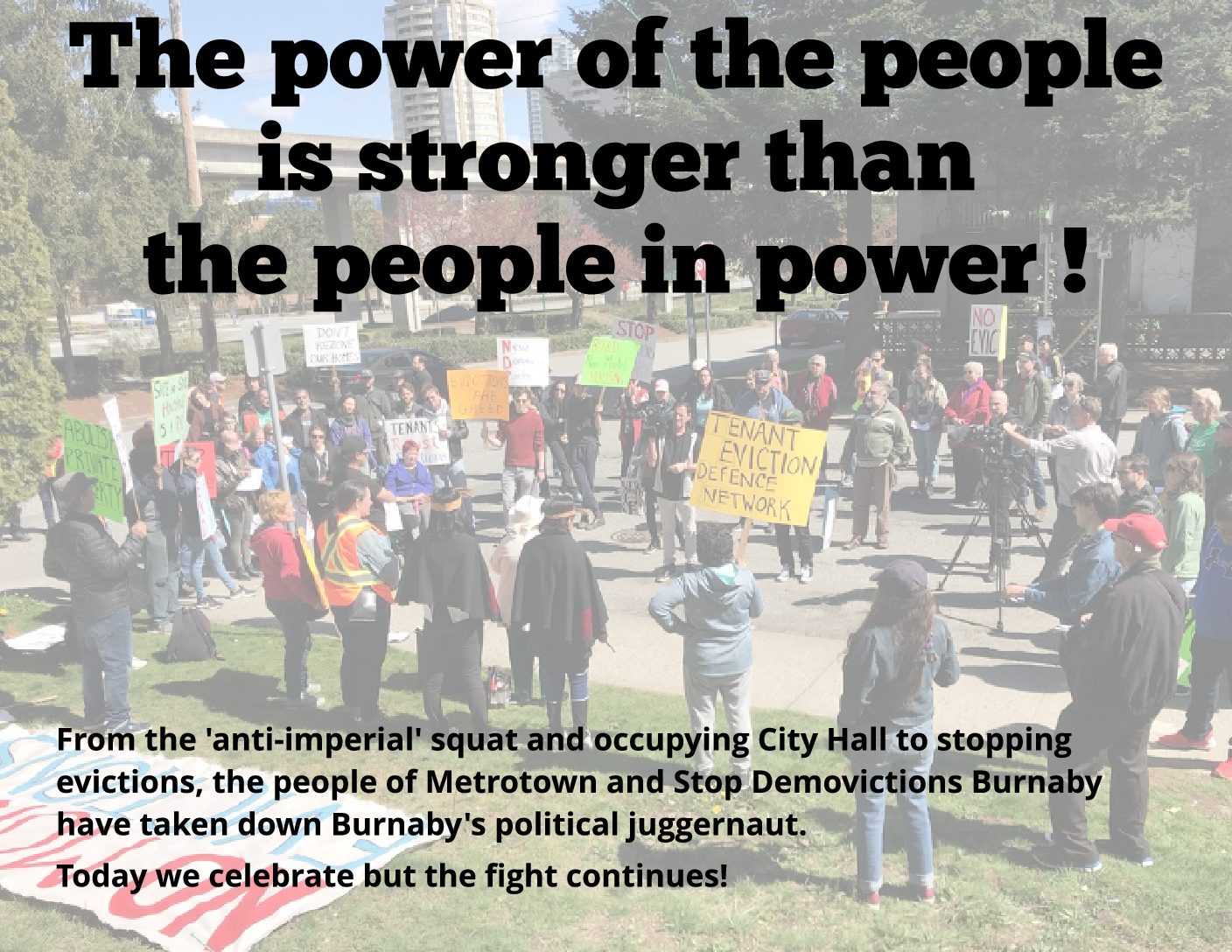 From the ‘anti-imperial squat’ and occupying City Hall to stopping evictions, Stop Demovictions Burnaby has taken down the city’s tyrannical mayor

After 16 years of iron-fist rule, Derek Corrigan has been forced out of Burnaby City Hall by the community power of grassroots organizing against demovictions. Close to four years of movement-building has taken many forms – from door-knocking, to marches, to occupations, to reports and analyses – tied together by the relentless efforts and courage of Metrotown tenants, who continue to stand up against the landlord-tenant system which places property above people. Very rarely are incumbent mayors, especially incumbent mayors with as many years of power as Corrigan had, beaten by opponents with no political experience, like Hurley. But Hurley beat Corrigan by a significant margin – over 6000 votes! This is a significant shift from the last municipal election, which Corrigan easily won with close to 70% of votes.

Voter turnout in Burnaby this year increased from under 25% to 33.4%. By building a movement that stimulates the political imagination needed to fight for a different system of land relations, Stop Demovictions is combating apathy. In a Burnaby Now post-mortem of Corrigan’s failure, Chris Campbell argues that Corrigan created his own downfall by failing to address housing and homelessness. But this leaves out the role of Stop Demovictions, which tirelessly exposed Corrigan’s commitment to mass displacement, and maintained a steady momentum of actions that gave low-income residents an outlet to politicize their frustrations and anxieties. The activism of organizers and residents created the political space for Hurley to position himself as an alternative to Corrigan’s reign of mass evictions. 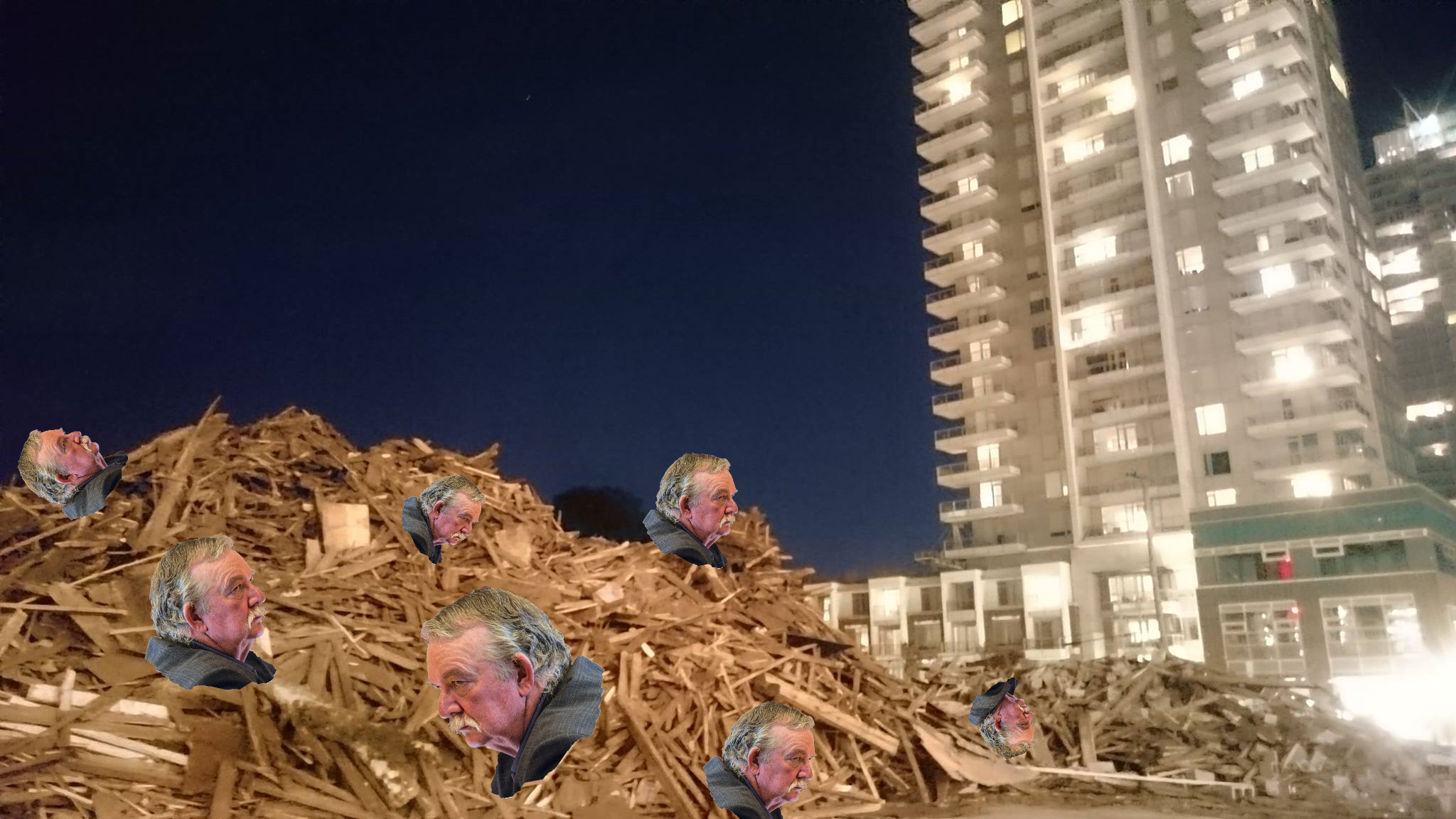 Linda, a renter from Metrotown who organizes with Stop Demovictions Burnaby, recognizes the importance of our movement in forcing this significant political shift. She explains, “I think it had a lot to do with us. Corrigan was very proud of what he was accomplishing with his ‘downtown Metrotown,’ but when we started putting out there what the plan was costing people like us – people being evicted with nowhere to go – [things changed].” Stop Demovictions Burnaby not only created the term “demovictions,” which has become a part of mainstream public discourse, but also forced the word into the mouths of electoral candidates. By refusing to give up our fight in the streets, we created an electoral political vacuum that municipal candidates were forced to scramble to promise to fill with inoffensive reforms – all that is possible within a profit-driven economic system hinged upon stealing and commodifying Indigenous territories.

In a post-election interview with the CBC, Hurley stated that he’ll work with BCA candidates and Corrigan’s cronies amiably, and adds that he’s worked with most of them before and even considers many to be personal friends. How Hurley’s “friends” will respond to his anti-eviction platform remains to be seen. While Stop Demovictions Burnaby is building a mass movement to resist evictions and giving people space to speak out, Hurley has simply piggy-backed on our work. For example, his campaign used and cropped an image found on our Facebook of the July paint-in for his promotional material, appropriating the political aesthetics and energies of Stop Demovictions in order to win office.

There is a heavy skepticism, amidst hope, directed toward politicians in Metrotown, including  Hurley. At our Spend the Surplus press conference  preceding the election, Metrotown resident and organizer Allan stated “promises were made to be broken, that is the truth of it.” Adele, another Stop Demovictions organizer from Edmonds, who has noticed similar patterns in her area of Burnaby, described how although she is content that the nightmarish Corrigan is gone, she feels she would be naive and oblivious to think of Hurley as a fairy who can come in and fix the corrupt mess of the housing system. Linda hopes Hurley follows through on his promises, stating “I really hope Hurley fulfils everything he said he would because it is desperate times. This is not just something you can say you are gonna do and not do it – we are talking about lives.”

As Hurley’s term begins, Stop Demovictions Burnaby’s work will intensify. While we must celebrate our movement’s successful dethroning of the demoviction king, this victory is far from a reason to stop fighting. Our imaginations and hopes will not be restrained by what politicians inside colonial chambers bound by capitalist walls think is possible. Stop Demovictions will not only hold Hurley accountable, but relentlessly challenge him to go beyond a moratorium as we continue organizing in the streets to defend Metrotown as a working class and Indigenous neighbourhood.

Not one more dime for the cops that assault us