Women in Tent Cities are fighting back against patriarchy! 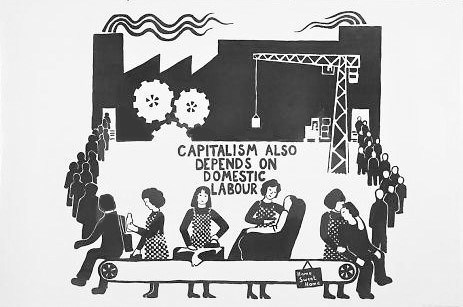 Women in tent cities are organizing themselves to band together and fight back against patriarchal violence. The Women’s Council in Nanaimo’s Discontent City formed in early June, followed quickly by a women’s group in Maple Ridge’s Anita Place Tent City.

At the first meeting of the Anita Place Women’s Group, we gathered to talk about the central struggles of women in the tent city and found that they are not unique. Like women everywhere, women at Anita Place face threats of violence and disrespect from men, including the expectation that women perform reproductive labour. Women encounter patriarchy and misogyny wherever they are, whether it’s carried out by boyfriends, cops, or vigilantes.

At our next meeting we discussed the international Wages for Housework campaign of the 1970s, which sought wages for housework—not to make women more money, but rather, to socially validate women’s labour and give them the power to refuse to do that labour by going on strike. We recognized parallel concerns in the struggles of sex workers, who consistently campaign under the slogan “sex work is work!”. We discussed how the devaluing of women’s labour, whether sex work or child rearing, affects a woman’s sense of self confidence and empowerment. Throughout these conversations, one consistent theme was that women banding together creates collective power.

The Women’s Council at Discontent City and Anita Place Women’s Group share goals of increasing women’s leadership in tent cities. Mercedes Courtoreille, an organizer at Discontent City, explained that because most of the homeless population in Nanaimo are men, women feel isolated and like they must rely on male partners to protect them. She says the Women’s Council “gives women a voice where they feel heard… it’s creating a community of women who may not know each other very well, but are supporting each other. They haven’t necessarily had that. A community of women supporting women is long overdue.” In less than one month, the Discontent City Women’s Council has provided locks for single women to lock their tents, arranged a buddy system for women to back each other up, and is about to propose a workshop to help camp residents better understand consent.

Part of the work of our homeless women’s organizing in suburbs and non-metropolitan cities will be to understand not just what gender violence looks like, but why it exists and how it reinforces capitalism and settler-colonization. Canada’s colonial project relies on a western European gender binary that has destroyed Indigenous kinship relations, dispossessed Indigenous people of their territories, and subjugated Indigenous women and Two spirit people. Capitalism similarly relies on the nuclear family form in order to keep economic production going and pass on private property. Because what it means to be a “man” or “woman” shifts in meaning over different places and different periods of time, we will need to embed our explorations of gender violence in our current context, while also drawing on history to better understand how we got here.

Women have always been leaders in organized Tent Cities, including doing behind-the-scenes labour to make sure that tent cities run smoothly. Forming Women’s Councils helps women recognize the value of their labour and skills while fighting patriarchy in the economy and government policy that makes women poor and homeless, and in low-income communities – including tent cities – where women live and struggle.

Fighting oppressive power along the continuum of harms