On Thursday, May 17, 2018, a new tent city emerged in an unused city lot on the port lands above the railway tracks in Vancouver Island’s second largest city of Nanaimo. Within two hours of homeless campers Gina Watson and Mike Pindar setting up their tents, 30 more people had streamed in and joined Discontent City. The new tent city held a news conference and read a founding declaration modeled after the declarations and lessons of tent cities in other BC cities; Discontent City speakers announced the camp as a space of homeless self-determination and collective survival, and homes not shelters, not jails, and not the “supportive” model of institutional state housing.

I lived in the camp for its first tenuous week. The overwhelming, dominant feeling within its fenced walls was relief. Most of the homeless campers who arrived on the first day told me they had suffered ongoing harassment from bylaw officers and horrifying violence from cops for months and years. One after another, homeless people showed up at the gate of the camp with a cart or a bag over a shoulder but without a tent. As one man told me he had lost 3 tents since the City moved the camp off the city hall lawn in March. Bylaw officers systematically dispossess homeless people of their tent shelters and leave them vulnerable to the elements. Most people say they feel the purpose of this harassment and theft is to push them out of town.

The sight that symbolizes Discontent City for me was Aaron Jules, an exceedingly gracious Nuu-chah-nulth man who received a donated tent from the camp’s front gate and unfurled it on a gentle grassy slope. I saw him struggle for a moment to assemble the poles and then stop, look around, and, exhausted, lay himself down on top of the still-collapsed tent. Sprawled out in the evening sun, Aaron slept, his arms splayed out. His sleep radiated relief. Later, he told me, “I feel relaxed in my camp family.” Campers joining Discontent City relief at finally securing a place where they are welcome; a place where they can build community; and a place where they can resist, through sheer numbers and organization, the violence and harassment that the state and poor-hating strangers inflict on homeless people daily; and where they can finally find some rest.

Creating a home away from police violence and bylaw harassment

Discontent City campers have told me stories of experiencing violence at the hands of police and harassment from bylaw officers. Before he showed up on the first day of the tent city, an Indigenous man named Ed had been staying for six months at a site in the woods outside of town. Last week, RCMP and Bylaw officers showed up to his site and told him he had 20 minutes to pack up his things or they would be seized. He protested that he could not possibly pack all the things he had collected in his camp site home in 20 minutes, but he cooperated and hurriedly packed.

After 15 minutes, the cops yelled to Ed inside his tent that his time was up, and demanded he come out. He crawled out of his tent and they told him he was under arrest. He explained, “I asked why I was under arrest and two officers grabbed me by the arms. I tried to squirm away and one started hitting me in the ribs and yelled stop resisting. Another one grabbed me by the neck and tried to choke me out. I guess you could say I started fearing for my life a little bit. What worried me was how he was doing it. He was over top of me with all his weight, with his hand around my throat trying to choke me out. There were 3 cops in total that had me on the ground. One of them was holding my legs because when I couldn’t breathe I was struggling. I was yelling for them to stop choking me and I think I kneed one of them.”

The cops broke one of his ribs beating him for not moving fast enough. The RCMP officers arrested him and took him to the station. Released later without charges, Ed returned to his camp site to find it totally razed. Not even the things he had managed to pack up were left behind. “All that was left was dirt,” he told me. And he explained why it happened, “There’s always been an issue here between homeless people and the cops,” he said.

Ed also said said that last summer he received 15 bylaw tickets in just one month. “Everywhere I go they give me tickets,” he said. “The bike cops that keep coming into camp are the ones who give us most of them.” One of these tickets he received in the middle of the night while he was sleeping in a city park, a legal act and limited provision won through the Abbotsford v. Shantz decision in 2015. Two bylaw officers woke him up and wrote him a ticket for littering. “How do you hand someone a littering ticket when you didn’t even see them litter?” he said. “They give out so many tickets because they hate the homeless. RCMP bike cops told me that they have a bylaw that says once you get 5 tickets they can redzone you from certain areas. They can tell you you’re not allowed in the downtown core. Most of our services are in the downtown core. So that forces us to either breach the redzone and risk getting arrested, or to leave Nanaimo.”

Police violence and bylaw harassment are not the only threats to homeless campers’ wellbeing. Like other tent cities, the paramedics have already flagged Discontent City as a “high risk” site, meaning that paramedics require police accompaniment if they are called to an emergency, including an overdose. Police presence during health emergency calls is a barrier to homeless peoples’ safety because it means that homeless people will avoid dialing 911 when medical help is urgently needed, choosing to try to deal with the emergency on their own rather than risk arrest.

Last night in the kitchen tent, a young homeless man at the camp told me that he hates narcanning people because one time he tried and the man he was assisting died. He was in a house and the people who lived there were afraid to call 911 but they did not have enough Naloxone to save the man – so he had to sit there and watched him die. Although the “Good Samaritan Act” protects people who call 911 for overdoses from arrest and prosecution for simple possession, it does not stop police from making arrests for trafficking, and homeless peoples’ traumatic relationships with police mean that police attendance for any reason is a life threatening disincentive to calling 911.

In the first week of Discontent City, the RCMP have taken every opportunity to trigger homeless peoples’ trauma, poison dynamics between the camp and state structures of power, and make officers unwelcome. Police have attended the 3 ambulance calls made the first week; they cuffed one man in medical distress and put him in a cruiser rather than an ambulance, and threatened another with arrest under the mental health act if he refused to go to the hospital after overdosing. For the first 4 nights, RCMP officers alone or in pairs showed up at the camp gate and demanded access to the sleeping camp in the middle of the night for no reason other than to exert their usual violent power over homeless people. This harassment culminated in the RCMP arresting 5 campers and supporters on Tuesday May 22nd in order to remove the gate that protected the camp and, in the words of RCMP Sgt. Dave LeBerge for police to gain “unfettered access” to homeless peoples sanctuary.

The structural discrimination against homeless people expressed through police harassment prevents the people most vulnerable to death from health emergencies from accessing emergency health services, putting their lives at risk. While Nanaimo Mayor Bill McKay says that there will be “hourly patrols with RCMP to make sure that everybody’s safe,” the experience of the campers themselves is that the mere presence of the RCMP puts them at risk of arbitrary arrest, physical violence, the obstruction or denial of emergency medical care, and at the most extreme, risk of death.

A unique characteristic of Discontent City is the immediate awareness and vocal articulation of support for Indigenous sovereignty. More than half of the campers are visibly Indigenous, and there are at least two members of the Snuneymuxw First Nation tenting at the site. Every evening, the tent city holds a meeting and between 30 and 40 people have been in attendance. At one of the very first meetings, campers expressed the importance of recognizing Indigenous sovereignty by establishing clear relations and communication with Snuneymuxw First Nation.

On day two of the tent city, campers and supporters visited the Snuneymuxw Band Council building, and met informally with a staff person. The camp decided that before taking any additional actions at the site, they will first begin the work of formal relations between Discontent City and Snuneymuxw government. The fact that Indigenous people make up the majority of campers at Discontent City, and have also taken on leadership roles, is illuminating; Nanaimo’s tent city is distinguishing itself early on as a homeless encampment with a strong understanding of Indigenous sovereignty, and an articulated desire to follow protocols for respecting, honouring, and accountably accessing Native land. 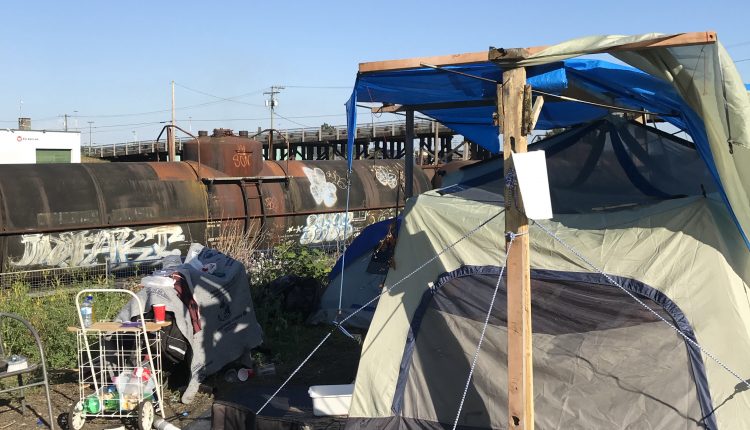 Organizing a home and organizing resistance

The leadership by Indigenous people at Discontent City is inspiring. It also points towards possibilities for further developing tent city protocols in other places that are aligned with particular First Nations communities and governments. Though the politics within band councils are complex, Discontent City’s initial steps towards building relations with Snuneymuxw are promising.

Developing relations and protocols with First Nations is an aspect of community building that also expresses resistance against the colonial state. This dual approach of resistance and community building — resisting the rule of colonial-capitalist private property through seizing unused city-owned lots, and building community by foregrounding Indigenous land stewardship — is at the heart of the emerging Discontent City. The camp provides relief for those most severely impacted by a housing crisis that the state is increasingly managing through violent police repression. The camp offers solace from constant bylaw harassment and theft, the risk of arrest and police beatings, and the fear of overdosing alone and without a community that provides necessary care. But perhaps above all, Discontent City is a ray of hope for others in B.C. who are homeless and without community. The successful establishment of a tent city in Nanaimo proclaims that homeless people have the power to break with the lie of private property, to resist the violence of the state, and to express and share their collective humanity.