Breaking private property and the challenge of fighting colonialism

In May of 2017 the Movimento dos Trabalhadores Rurais Sem Terra, or Landless Workers Movement (MST) published a manifesto condemning “the criminalization of social movements and violence in the countryside.” Since a judicial coup removed Brazil’s social democratic president, Dilma Rousseff from power in 2016, there has been an increase in reactionary violence targeting the Brazilian left. In the countryside landless workers and Indigenous peoples have been massacred by police and vigilantes acting on the behalf of large landowners, leftist institutions such as MST’s Florestan Fernandes National School have been raided, and left-wing politicians assassinated. At the same time, Brazil’s unelected right-wing government has imposed harsh austerity measures, freezing social spending for the next 20 years. MST argues, “the coup has liberated the most reactionary and violent forces [in the country],” with many sectors of the Brazilian elite becoming openly nostalgic for the return of the military dictatorship which ruled the country from 1965 to 1985.

For MST this right-wing turn signifies a return to the political conditions in which the movement was born. In 1984, MST began organizing with landless agricultural workers during the last years of the dictatorship. Farm workers in the south, mostly displaced peasants, began to take over unused land from large landholders and farm it cooperatively. Once these new communities were established they sought legal recognition under Brazil’s agrarian reform law, which allows for the redistribution of unused land. Over time MST expanded to become a national movement and helped to establish a partner organization, the Movimento dos Trabalhadores Sem Teto, or Homeless Workers Movement, which organizes displaced urban communities to take over vacant buildings. Throughout their years of organizing, over a million landless workers have gained access to land. MST now boasts over 500,000 members, making it one of the largest anti-capitalist movements in Latin America.

For over three decades MST has organized among populations excluded from the system of capitalist private property – displaced peasants and precarious urban workers. Rather than fighting for inclusion within this system, they have fought to overthrow it and replace it with collective systems of property based on direct use of the land. This vision fits with MST’s larger vision of creating a system of dual power, in which the movement is able to wield power independent of and in opposition to the capitalist state. In the words of MST, “In the daily struggle, we learn the responsibility of standing up against private property and the commodification of life.” 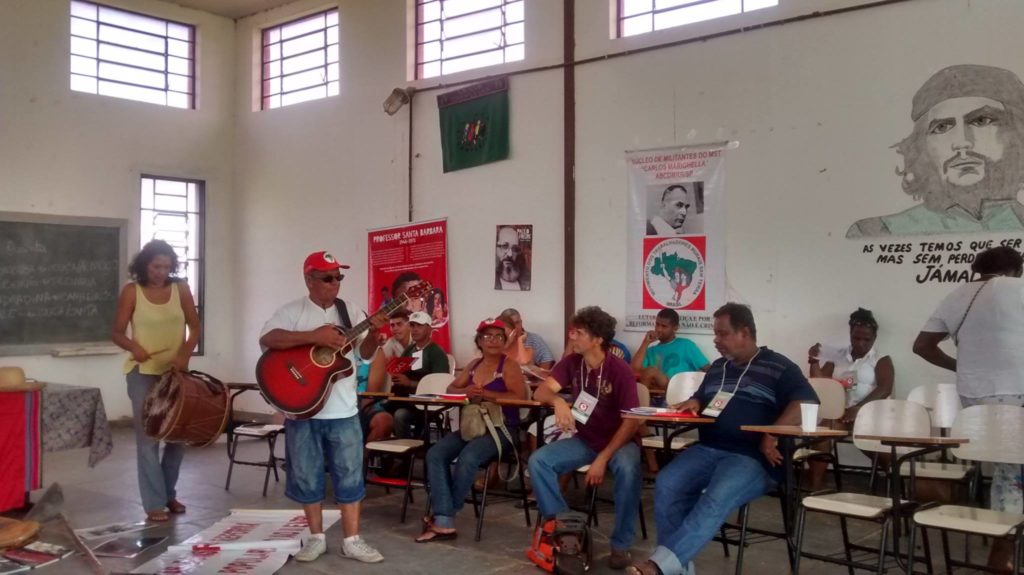 As part of their organizing work, MST has developed political education programs where daily struggle is turned into anti-capitalist praxis.The purpose of education is “to awaken the organizational consciousness and spirit of leadership of the children, adolescents, educators and community.” Heavily influenced by the Brazilian theorist, Paulo Freire, MST emphasizes education as a process through which members come to understand the structures that oppress them and begin to take an active role in their own liberation. Education is seen as a means of developing political consciousness within the movement through direct democratic participation in community led institutions as well as encouraging the participants to become theorists of their own revolutionary struggle.

MST schools create politically conscious working-class leaders and intellectuals, while at the same time addressing the day to day challenges of creating democratically organized farming communities. In MST schools, organization and community members, both youth and adults, learn about Marxism and the history of peasant struggles in Brazil as well as agricultural techniques and democratic decision-making practices. The areas of study are unified in the daily experiences of the landless workers and encourage the participants to become economically independent of capitalist property relations through building intellectual and practical skills.

MST also sees the schools as places to confront patriarchal ideas and break down the gendered division of labour within MST communities, with students rotating through different kinds of work on a regular basis. However, within the wider community this is often not the case. The vast majority of educational and other care work is taken on by women, while cis-men continue to dominate positions of political leadership and positions related to agricultural production. As well, despite organizing by trans members within the MST, the organization continues to conceive of gender largely in binary terms.

With these limitations in mind, MST community schools still act as sites of radical education that do not just teach ideas, but also are organized through revolutionary democratic principles. Some MST communities schools are run independent of the Brazilian state. Other MST schools receive state funding but are under the effective control of the community through the direct participation of the students, the wider community and the teachers, many of whom are either MST members or politically sympathetic to the movement’s goals. The schools maintain democratic practices and accountability to the community through teacher and pupil collectives as well as through the general assembly. The teacher and pupil collectives meet on a weekly basis to organize the daily activities of the school, while the general assembly meets several times a year to articulate its larger political vision.

MST also operates schools at the regional and national level to train movement leaders and educators and further define the politics of the organization. MST schools are an example of breaking the monopoly on information that is held exclusively in the hands of the capitalist class through traditional schools and universities.

The limits of MST’s anti-colonial analysis

MST’s commitment to education is an inspiring feature of their organizing, but a limitation of the MST political vision is their analysis of colonial power. The majority of MST’s members are non-Indigenous or not connected to Indigenous economies and societies. Much of their political analysis frames the struggle for land reform in nationalist terms because the Brazilian Constitution allows for private property to be expropriated if it fails to meet its “social function.” The Landless Workers Movement has used this clause to legitimize expropriation of land by the landless, yet in doing so they reinforce the colonial nation-state as the ultimate owner of land in Brazil.

In recent years, MST has built stronger relations with Indigenous and Quilombo movements of African-descendent peoples who escaped slavery and continue to practice collective use of the land, who are fighting for control of their traditional territories. For example, when Guaraní communities reoccupied land they had been expelled from by the Brazilian government in the 1960s, the MST offered their political support. MST has also coordinated mass actions and roadblocks with Indigenous movements and in their public statements repeatedly called for the recognition of “the historical rights of Indigenous peoples and Afro-descendents to their land.”

However, MST spokespeople often present Indigenous people as one part of a broader alliance in the struggle for land. Similar to to Canadian and American socialist organizations, MST has fallen victim to an articulation of class struggle that does not challenge settler colonialism. The expropriation of capitalist private property into land under socialist production does not address the dispossession of Indigenous peoples’ lands. In not defining the different relationships that Indigenous, Afro-descendant and European settler communities have to land, MST overstates the unities between groups and flattens Indigenous and Afro-descendent subjectivity beneath a settler European subjectivity. 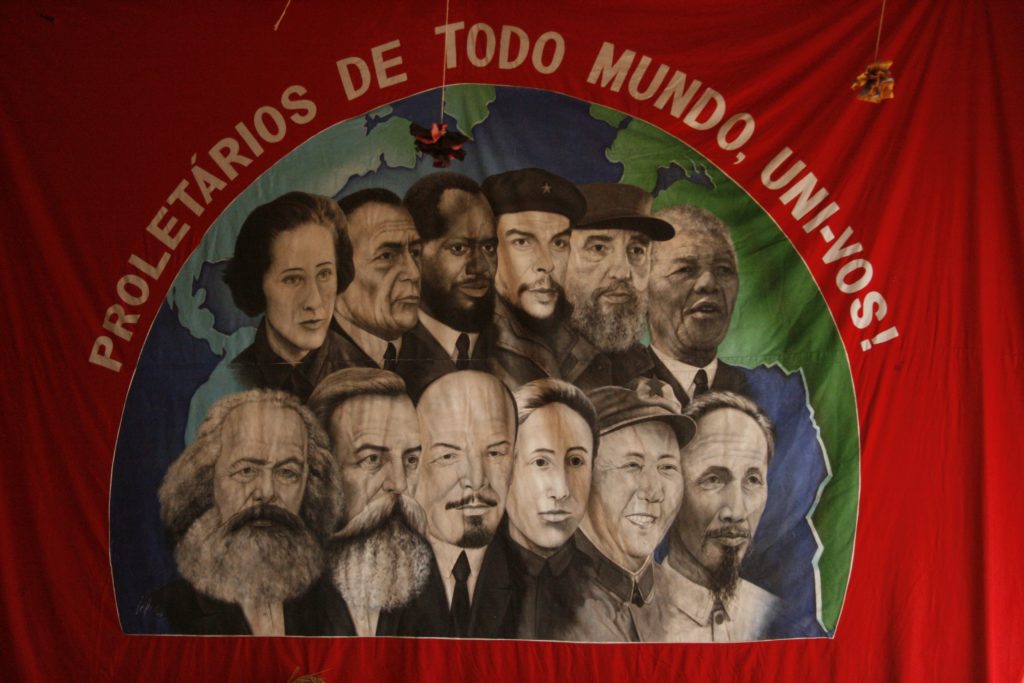 Despite these critiques, the Landless Workers Movement can offer valuable lessons to anti-capitalist, anti-colonial struggles in Canada.

First, MST identifies a clear social base among those excluded from the system of capitalist private property. In the Lower Mainland we see a similar process of exclusion among low-income, working class communities, whether homeless or renters, as well as Indigenous communities, whose economies and ways of relating to land already exist outside of capitalist property relations. Another key insight MST provides is the politicizing role of collective action. For many sem terras (landless), defying private property and taking over a piece of land awakens their political consciousness. This political awakening is then furthered through MST’s educational work alongside the experience of living, working and organizing collectively.

Additionally, by taking over land and working it cooperatively, MST is able to support the movement while creating spaces where the movement can exercise power in opposition to the capitalist state. Composed of peasant farmers, MST members continue to maintain relationships to the land, often based on forms of non-exploitative, ecological agricultural practices.

However, in their understanding of land reform in Brazil, MST fails to see the difference between Indigenous and non-Indigenous struggles for the land. The two are treated as equivalent, ignoring the specific ways Indigenous communities relate to the land, or some of the contradictions between MST’s politics and assertions of Indigenous sovereignty. It is important that as movement builders fighting both capitalist exploitation and colonial state power in Canada, as well as all over Turtle Island, we look to Indigenous leaders and elders to define their own relations to land and make sure our organizations are fighting for the land to be returned to its caretakers rather than for state redistribution.

Public Protest for Housing Justice in the Downtown Eastside

“One of the Most Ferocious Days our People Have Witnessed”