Saturday, April 14, 2018 – on a sunny afternoon, the Rwandan community of Metro Vancouver commemorated the 24th year since the 1994 genocide against the Tutsis. At a memorial rally and commemoration, young Rwandans exercised the organic forms of resistance to trauma that they developed in the immediate aftermath of the genocide. This memorial showed that the lessons and healing from the genocide continue here in western Canada, amongst the informal family of the Rwandan diaspora.

The commemoration started with a march around the Douglas College campus in New Westminster and was followed by participants gathering inside a classroom. The event started with a member of the community praying for the event and was followed by a documentary film about Rwanda’s fall into the abyss in 1994. A local musician, Ezra Kwizera, played music of remembrance. Speakers focused not only on the tragic past, but spoke about Rwanda today, describing how the country has risen from the catastrophe over the last 24 years. The event was closed with a candlelight ceremony where survivors remembered their loved ones, while the audience listened in solidarity.

It was a moving moment.

While the 5 major powers on the Security Council refused to intervene and stop the slaughter, people in communities around the world who learned about the story of this preventable genocide have never wavered in their solidarity with the people of Rwanda. This solidarity was still present at this 24th memorial event, and we are grateful for their support. 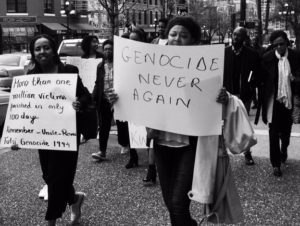 What was significant about this 24th anniversary is that young Rwandans are leading the work their seniors started a couple decades ago. They emphasize 3 things: remember, educate, and continue telling the story to preserve the memory of this tragedy and prevent it from raising its ugly head again.

The years following the genocide were a test for Rwandans’ resilience. Students who were in boarding schools faced a dilemma when it was time to go home either at Easter or Christmas breaks. With no families to return to, students asked the schools if they could stay on campus. They formed a national association called Genocide Survivors Students Association (GSSA). Across the country, students from secondary and post-secondary institutions formed their own families by designating members to play the role of brother, sister, mother and father. It worked. They offered each other support during difficult times and organized parties to have fun and celebrate by reducing the isolation that often triggered post traumatic stress disorder.

This organic resistance against trauma and isolation helped them immensely. Most of those students have gone on to complete their education and have now formed their own families and secured jobs in a variety of sectors.

Mukunde G. Mukurarinda is one of the student members of GSSA. He lives in Edmonton and has written his memoir, which he hopes to launch next month.

“It was not easy to write it but once I began writing, I knew that this story had to be told. I would encourage everyone among us to tell their story. It doesn’t have to be in the form of a book, it can be a play, a song or even a painting.”

Mukunde is right. Shortly after the 1994 genocide, several books were written about Rwanda. Gradually, Rwandans have began to gain the confidence to tell their stories. It’s refreshing to watch Rwanda’s cultural renaissance unfold and the role Rwandan millennials are playing in driving change towards a new Rwanda.

Killing Time – Addressing the Use of Segregation in Canadian Prisons