I may have been assigned male at birth, and I was born with a penis, but I was born a woman.

Trans women are told by Trans Exclusionary Radical Feminists (TERFs) that we are not women because we have “male privilege.” In an 11 year long human rights court case that defined the politics of both trans-antagonistic feminism and trans women’s relations with “women-only” spaces, Vancouver Rape Relief argued that trans women were “socialized as male,” meaning we are not ‘real’ women and that we could not participate or access their space. Although this case originated in Vancouver, it was taken to the Supreme Court of Canada and has had wider implications for what resources trans women can access all over the country, and even in the United States.

In contrast to “trans” – which refers to people who were recognized as the incorrect gender at birth – “cis” refers to women and men who identify with the gender they were assigned with at birth. Trans women use the word cis in order to acknowledge that being cis does not make anyone more or less of a man or women than being trans. Transmisogyny is a form of patriarchal violence that reinforces sexual difference between cis and trans women, denying the experience and voice of trans women, thus enabling cis-gender power over trans people.

The Reality for Trans women 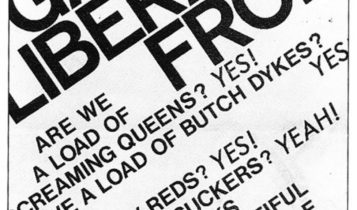 Trans women experience misogyny from the same patriarchal system that oppresses cis women. Trans women are verbally attacked for their appearance, experience higher rates of unemployment, less pay, housing security, murder, suicide, and rape than both cis-gendered women as well as trans and cis men because of our gender. Trans women are not “socialized as male;” we are disqualified from the arena of masculine power early on as effeminate “faggots” and “sissies.” Our attempts to express our womanhood are beaten out of us by our parents, siblings, and “friends.” Those of us who survive long enough – many of us do not – come out or transition into a world completely hostile to us – a world where “becoming a woman,” as Simone De Beauvoir says, is seen as the most irredeemable act. If it is misogyny that makes a woman a woman, then our cisters have something to learn from us transgirls.

There is a dual aspect to our oppression that cis-women do not experience, and that is transmisogyny. When fleeing misogynist violence from partners, friends, and in community, trans women try to seek out spaces where there is a zero tolerance policy for men abusing women. Many women’s only spaces that protect women from abuse – shelters, women’s centres, helplines, housing, etc. – are uncomfortable with trans women or outright reject trans women from their spaces. This is routed in TERF logic. TERFs even go so far as to purposefully release private information about trans women to police, lawyers, the internet, and employers in a direct attempt to sabotage trans women, myself included. Even more depressing, TERFs have claimed that trans women are men dressing up as women to rape cis-women.

We differ from TERFs in that, although we believe that cis-men do dominate all aspects of life, through a system of power called patriarchy that treats women as the possessions of men, we know that patriarchy exploits and exercises power over everyone who is not a dominating white man. And we acknowledge that cis-women hold social power over trans women in society. We also believe that any proclaimed revolutionary project must work to abolish all class exploitation and colonial power in all its forms. Our feminism sees capitalism and colonialism as inextricably linked to gender power. Furthermore, we believe that the TERF definition of womanhood is rooted in two logics that for centuries have worked as justifications for class, gender, and race oppression: biological essentialism and European colonialism.

Biological essentialism is the idea that gender identities and roles are social: for example men are producers and women are nurturers of children. In contrast, for gender essentialists, sex is biological – only tied to a human being’s reproductive organs. Biological essentialists may recognize that gender is social and historical, but they believe that biological sex determines a person’s gender identity and roles. Gender essentialists believe the root of women’s oppression is men’s control over women’s sexual reproduction.

The two-sex biological essentialist model is not a helpful way to understand gender in our world, nor is it a useful tool to analyze and fight against gender power. First, gender identities and roles are not bound to sexual biology – patriarchal systems and men exploit and use violence against everyone who they can express their gender power against, regardless of what their reproductive organs are. Secondly, two-sex biological essentialism is not a “natural” phenomenon; it was a model developed by European governments and bourgeois society to serve capitalist and colonial interests. What appears to us as a natural distinction between the sexes in the present is the outcome of hundreds of years of social, surgical, and scientific efforts to produce, rather than maintain, a gender binary.

European colonialism started in European societies themselves, dividing people up into productive and reproductive labour roles in order to compel one group of workers to labour for free, care for wage workers and raise the next generation of workers into an emergent social organization: the nuclear family. Women as a social class subjected to male power began when the nuclear family became the dominant social unit in society. Gender and the family was used as a lever to crush the peasant resistance to new laws that promoted gender binaries and inequality. This model of separating people into two different social roles was then taken to colonies and semi-colonies of Europe. All around the world, European colonizers violently imposed their gendered division of productive and reproductive labour on colonized peoples, destroying their traditional understandings of sex and gender that differed from the European model.