Open letter to John Horgan: Cut Anne Kang and stand with the People of Metrotown 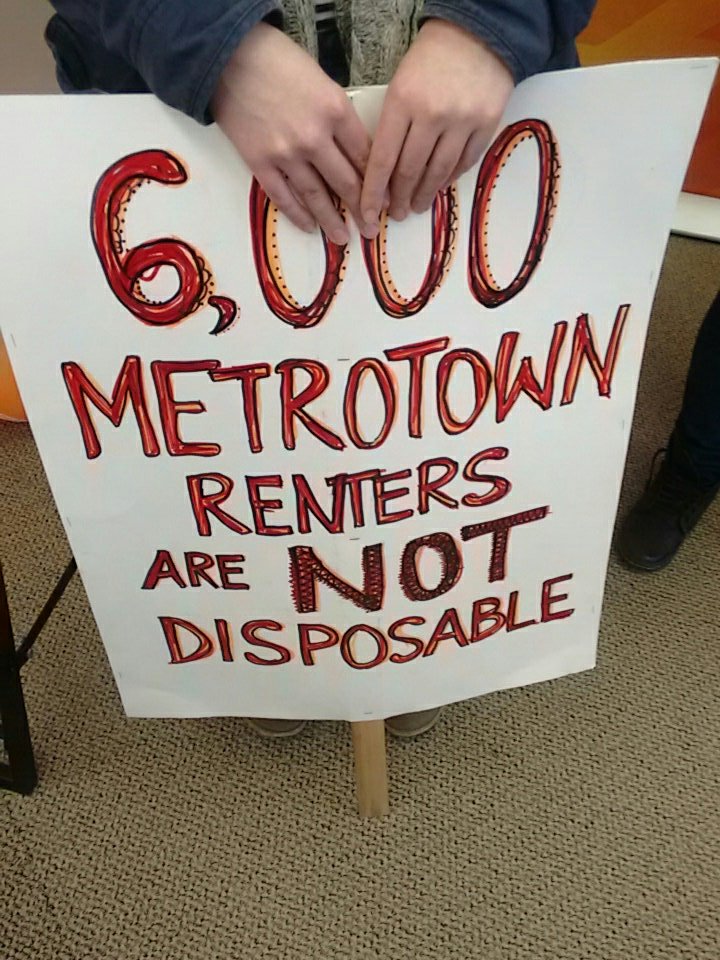 Dear John Horgan, leader of the BC NDP,

On Tuesday April 11th, a group of housing justice activists with Stop Demovictions Burnaby Campaign visited the office of Anne Kang to protest her NDP MLA candidacy in the Burnaby-Deer Lake riding. We read a statement explaining why we believe NDP should sever ties with Anne Kang. We believe Kang, who as a BCA City Councilor has voted to rezone hundreds of rental units and displace thousands of low-income renters, is not a people’s candidate for our area. We demanded to meet with you, the leader of the BC NDP, to discuss our solutions to the demovictions crisis in Metrotown — solutions we have developed over years of organizing with this vulnerable community; solutions we believe NDP should incorporate into their platform in order to present a strong and clear alternative to the BC Liberals and reject their laissez faire ideology that is threatening life on every level in this province. We did not expect that Kang and the NDP would be happy to receive our message but neither did we expect to be met with the level of hostility that we received from your party.

Over the years of organizing to raise the issue of the demovictions crisis in Metrotown, we have learned that all the formal avenues of dialogue in Canadian and B.C. politics are designed to silence the evicted, while broadcasting the perspectives of the evictors. That is why we showed up unannounced and with traditional drums to make a point. Demovictions are silencing and displacing our community, and for Indigenous residents they are an example of ongoing colonization. We approach the NDP because of your claim to be the party of the people, not the developers. We approach the NDP because we want you to win the election with a strong working class oriented platform and with people-backed candidates. But we fear that the NDP’s hostility to us at Kang’s office means you are turning your back on renter, working class, and Indigenous communities – that the NDP, in lock step with the BC Liberals, are trying to bury the issue of homelessness, and stigmatize and criminalize dissent. 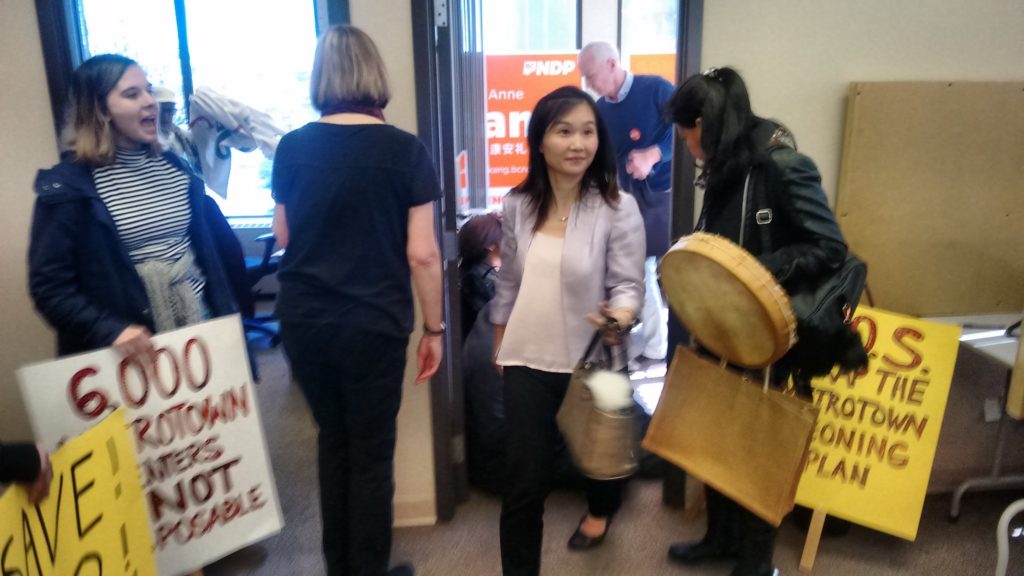 What Happened at the Sit-in

We are a group of mostly women, predominantly low-income, racialized, immigrant, and Indigenous, some current residents of Metrotown, directly affected by demovictions. We were not aggressive, nor did we threaten anyone. We held the space; we tried to dialogue, and our only demand was to meet with you and to be heard. But we were immediately greeted with hostility by your campaign workers.

NDP staffers singled out the only man in our party, painted him as dangerous, and told the RCMP we were violent in order to convince them to remove us. They refused to dialogue with us or negotiate a meeting with you on our behalf, while one campaign worker disingenuously worked herself up into victimhood, pretending to have been badly assaulted.

Even though Anne Kang was present at the office she completely ignored us and didn’t respond to any of our questions. Instead, a male campaign worker came out of her room, assaulting two women in order to keep us out. He struck one woman really hard with two hands and she flew back three feet. He then grabbed an 18-year old Indigenous woman, Destiny, with both his hands, pulling and pushing her, while trying to slam the door on her arm with the full weight of his body. Another female campaign worker, the same person who alleged she was assaulted, grabbed Destiny’s other arm and would not let go until Sadie, Destiny’s mom, looked into her eyes and said “get your hands off my daughter!”

Smear Campaign Continues After the Sit-in

In the face of the aggression directed towards us, we sat down, chanting and drumming peacefully, and we even respectfully quieted down when a staffer said the noise was upsetting him. But this did not stop the NDP spokesperson, Jen Holmwood, from later slandering us to the media by speaking of “violent shoving” and “aggressive drumming” and lying about a protestor being arrested. As the occupiers of Indigenous territories, and in the era of “Truth and Reconciliation”, it is utterly shameful for the NDP to disrespectfully frame Indigenous drumming as “an act of aggression” in order to cover for their staff. This racist, colonial attitude toward the people you claim to be “putting back in the centre” of your election campaign speaks volumes about your party’s lack of commitment to its election rhetoric.

Your BCA affiliate, Mayor Corrigan, who has used every opportunity available to him to bully the thousands of people who will be evicted and displaced from his city by his demovictions policies, picked up the rhetoric advanced by Ms. Holmwood, to paint us as “bullies.” Bullying is a description of an abuse of power; Corrigan and the NDP appropriate and misuse the term to use it to describe the resistance of a community fighting their displacement by state and corporate power that includes development corporation profits, City and Provincial laws, courts, and the repressive power of the police. The repeated ignoring and slandering that our community has received from the City of Burnaby, and Mayor Corrigan individually, are examples of institutional bullying. How can the BCA and the NDP claim to be parties of “Social Democracy” when they respond to a group of marginalized women speaking up for their community, with bullying, physical aggression, smear campaigns, and phone calls to the police? 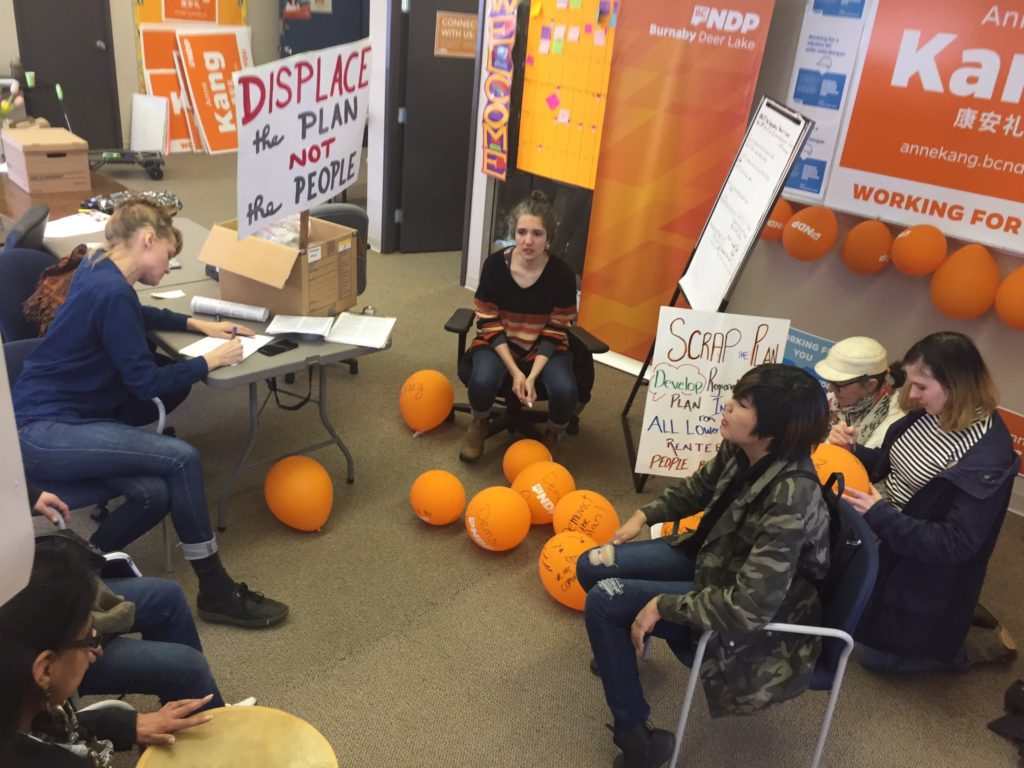 We Won’t Go into Permanent Placelessness!

Mr. Horgan, we would not have been at Anne Kang’s office if we hadn’t seen the serious, legitimate worries of our community go ignored for years. We have met poor immigrants, refugees, and students crammed into tiny, unhealthy spaces; we have met people suffering from mental health issues, hospitalized due to the anxiety of insecure housing; young families on tight budgets, who have been forced to move more than 3 times in 2 years. All these people share the same fear: where will they go when their current building too comes down? We are aware that unless something changes, many of us are bound to end up on the streets, or on friends’ and family’s couches with no option out of this permanent placelessness. Destiny said at the sit-in: “I’m here because I see how many people are struggling. I see the worries of mothers, fathers, grandfathers, people who don’t entirely understand what is happening, people who only understand the eviction slip that they get. I’m here to fight for people who cannot fight for themselves.” Mr. Horgan, we had no reason to demand a meeting with you the way that we did, other than to fight for our community.

Our criticism of the NDP’s platform and candidate has only been reinforced by your party’s unfortunate decision to take a callous stance against our community and your staff’s display of unprincipled behaviour. We are writing now to correct the record about what happened in Anne Kang’s office, and to urge you to reverse this decision, come out on the side of the people, and oppose the development corporations–because our community is not going anywhere. Your BCA affiliates cannot “rezone” us into silence, however hard they try. Our community refuses to be displaced again.

We ask you, as the leader of the NDP: