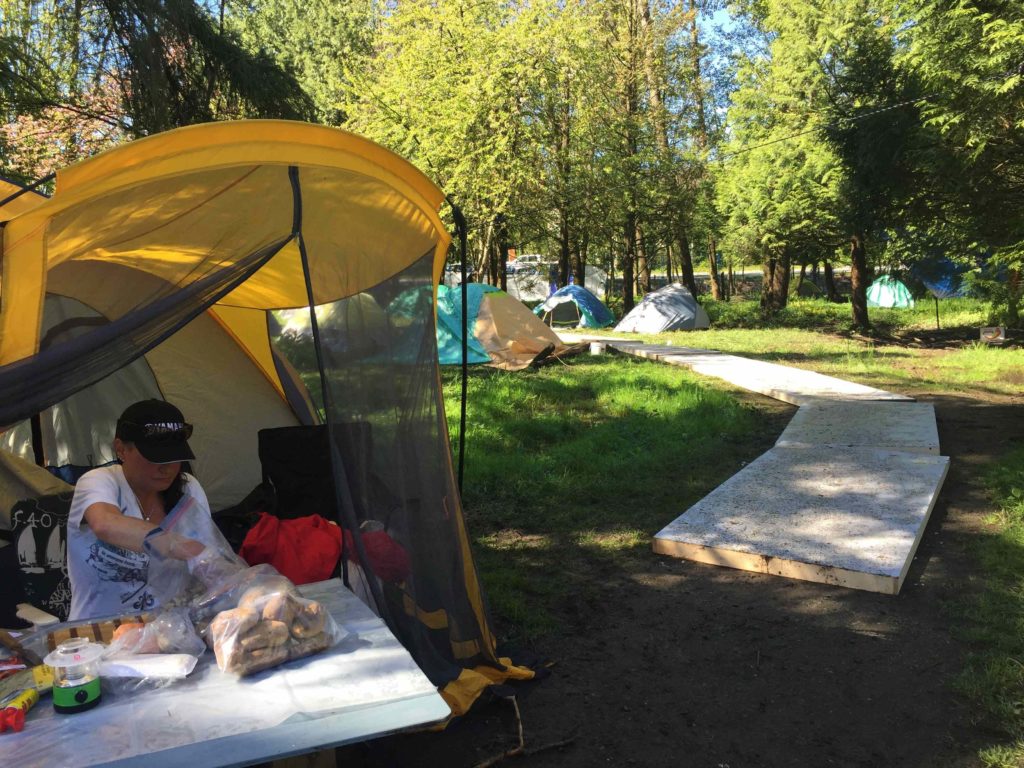 On Thursday May 4, I went to visit a tent city in Maple Ridge, which was erected a week before the BC election. The action was led by the Maple Ridge street population along with Alliance Against Displacement in protest against a move to close a 40-bed Maple Ridge shelter, run by Rain City. The protesters chose an empty city lot and named their new home Anita Place, ignoring the fury of passing pickup truck drivers.

The name of the tent city has double meaning. It was named in honour of Anita Hauck, a Black woman who worked as a social worker and lived on the same plot after losing her job. The second meaning is self-explanatory if you read the words fast: I-need-a-place.

I met two other supporters at the Coquitlam Skytrain Station and we were picked up by Ivan; one of the action organizers and member of the Alliance Against Displacement.

“How is the morale at the camp”? I asked Ivan as he pulled out of the parking lot heading to the camp. “The morale is good”, he explained. “Now and then we have some yahoos that drive by, slow down, stare at us and spin off their wheels as they leave. There has not been any violence. This afternoon, we had our first meeting and things seem to be under control.”

I was curious about the state of the Mayor, who was hiding following death threats over her favourable position on homelessness. “The mayor is still in hiding. The RCMP is investigating on the threats against her that were posted on social media. She hadn’t been seen for weeks,” explained Ivan. Homeless people face an even sharper danger from Ridgeilante and Soldiers of Odin violence than Mayor Nicole Read, but they don’t receive an RCMP detail, and they can’t go into hiding. To defend themselves, they made Anita Place.

At the height of the British Columbia’s worst housing crisis in history, political tension has swollen over what to do with homeless people. Pressure is mounting as gentrification continues to push low-income renters onto the streets, unable to meet the galloping cost of renting in SRO (Single Resident Occupancy) hotel prices in the Downtown Eastside. According to the 2016 CCAP Report on SRO Hotels and Housing, the average SRO rents at $548.00 currently. The total homeless count in the DTES alone has reached 1,200. In Burnaby’s Metrotown area, Mayor Corrigan and his council are planning to execute a draconian mass demoviction of more than 3,000 low-end of market rental apartments. Most of the 6,000 residents of these buildings are immigrants who have recently settled in Metro Vancouver. They will have no choice but to pack and relocate to Surrey, Langley, or Maple Ridge. There is a trend is that when people are unable to rent in Vancouver they move east along the skytrain line, and beyond it to car-dependent communities, and spend more time commuting from home to work.

The challenge to find a lasting solution to the homeless crisis is exacerbated by the fact that most people don’t understand those they are purporting to help. Before a solution is found, we need to demystify assumptions about who the homeless is.

Last February, a public hearing was organized by Maple Ridge’s two BC-Liberal MLAs in a Baptist Church for residents to speak out on the issue of homeless shelters. The outpouring of hate from Maple Ridge homeowners was jarring. As the presentations unfolded, two things came up in full view: the hatred that low-income people in Maple Ridge face every day, and; that the low-income community survives by virtue of their profound courage, determination, and unity.

What transpired as speaker after speaker stepped up to the mic, was the lack of appreciation of what makes someone homeless. Not all homeless people are addicted to drugs. Homeless people are not violent thieves. What these stereotypes miss is that homelessness can happen to anyone. I recall a conversation I had with a homeless man in the Downtown Eastside. Before he became homeless he was a self-employed painter and had his own truck. His truck was stolen so he lost his painting contracts. Losing his immediate income and without savings, he was evicted from his apartment and his girlfriend left him, before he knew it, he was living on the streets. It’s that simple.

“The resentment of homeless in Maple Ridge is different from the not-in-my backyard, NIMBYism of Yaletown penthouse dwellers,” Ivan explained. “Ridgeilantes suffer a type of revanchism, a hate based in fear of the sight of homeless people rooted in their anxieties about their own economic and social insecurity.” He went on to add that “most of the folks I have spoken with in Maple Ridge who harbour strong hatred against homeless have either been homeless or intimately know someone who has been a homeless. I think they are scared and push them away as a futile way of protecting themselves.” 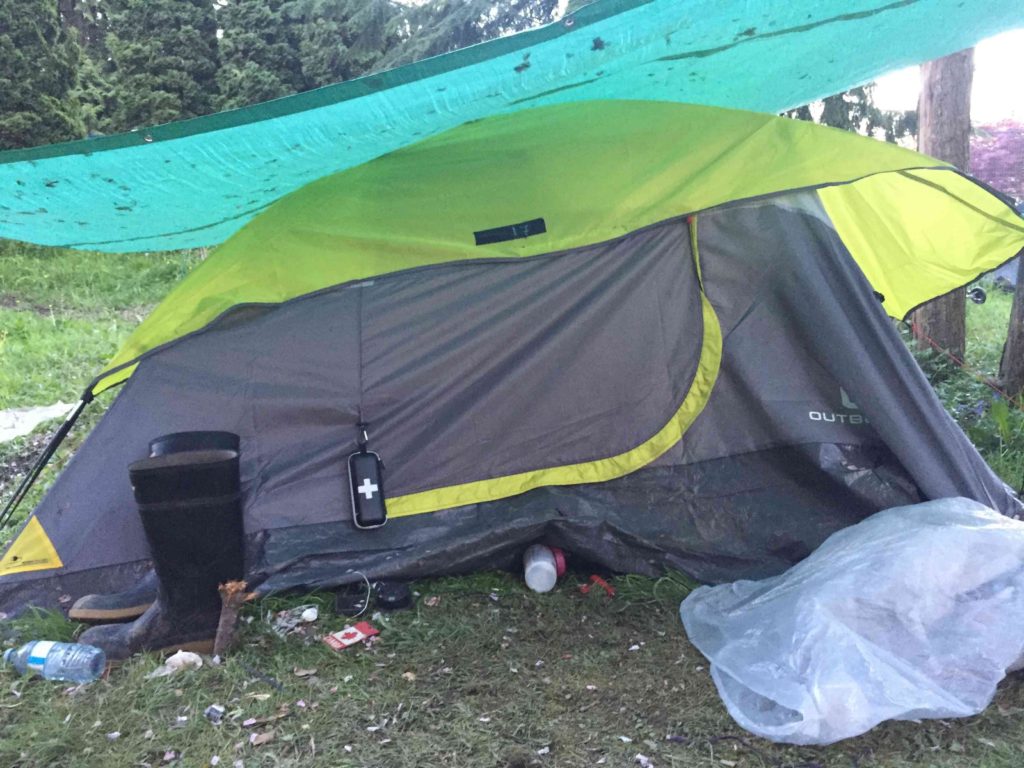 The irony in this campaign is that politicians from the two major parties seem to be oblivious to the plight of the poor. Anxious to win the so-called “middle-class” vote, the NDP is whispering into its supporters ears that a vote for the NDP is a vote to change the status quo. “Please vote for us and trust that we will fix the mess once we are in office.” The BC Liberals are even more flagrantly refusing to listen to the demands of the poor. When asked why BC is the only province without a poverty reduction plan, BC Liberal Minister Fassbender said: “We don’t have a poverty reduction plan, we have job creation plan.” The BC Liberals represent a market fundamentalist belief that the market will solve the problems the market creates. But how can poor people pay rent when their income is below the required shelter allowance?

In their election platform BC Liberals argue that increasing welfare rates will enable laziness and send negative signals to the recipients who will not have a poverty-incentive to look for work. In his arrogant demeanor, BC Liberal housing Minister Coleman stated in the Legislature that: “… people on social assistance should be pleased with what they have because they received double of what people in the developing countries receive.”

The current housing crisis should be treated as an emergency. If we saw homelessness as the emergency it is, we would force all three levels of governments to sit around the table and build the housing needed to end homelessness. According to the Alliance Against Displacement, it will require at least 10,000 units of social housing to be built every year across the province to overcome the deficit of years of inaction and lift all 100,000 people in BC facing homelessness out of crisis.

What seems to be forgotten by both the NDP and Liberals in the 2017 BC election is the fact that housing is a fundamental human right, not a commodity. There are plenty of examples that Metro Vancouver can emulate. Take Austria for example, where 3/4 of all housing is social housing. We can do it in BC but not until we elect politicians who value human rights over the bottom line.

Before the mayor of Maple Ridge went into hiding to avoid death threats, she was calling on the Province to settle on a plan to tackle homelessness in her city. She spoke about two proposals for housing in the city have been knocked back recently and that council needs the Province’s support. “Council has been standing in this pocket for two years. We’ve brought the solutions forward, we’ve worked with BC Housing, we’ve worked with the Minister. We have a $15-million amount of money on the table.”

When I was visiting the camp discovered that John Horgan, the leader of the BC NDP, was campaigning nearby. They decided to go up and invite him to come for a visit at the Anita Place tent city. He agreed to visit but not to build homes. When Ivan pushed the NDP leader to commit to building social housing on the city-owned land and house the homeless, Hogan waffled, claiming that he could not make a commitment to build on a city owned land. Ivan argued, “The city has already allocated land for housing. We now need the NDP to commitment to build social housing here if you win the elections.” Horgan responded that the NDP has committed $240 million to build housing, to which Ivan responded, “The NDP platform talks about using the money to fund all sorts of housing, including rent rebates for private landlords and subsidies for homeowners and market developers. We need social housing to house low income earners who are severely affected by the current crisis.” Horgan refused to specify how much money the NDP would dedicate to building new welfare-rate social housing.

The fact that Hogan came to Anita’s Place Tent City is a small victory because the media always comes along. Ivan explained, “We want to shed light on an issue that politicians are ducking. We want homelessness to be front and centre in this election; we won’t allow it to be the normalized future of life in BC.” Anita Place is casting that light, breaking that silence, and fighting for the homes that people need.

Open letter to John Horgan: Cut Anne Kang and stand with the People of Metrotown

Homelessness, poverty, and the police state: Anti-election week of action exposes the ugly reality of BC’s future: By the Editors