The situation for low-income renters in BC has never been worse. In 2012, with the Sequel 138 condominium at 138 E. Hastings, BC Housing began financing for-profit condo developments with small amounts of social housing rather than building new social housing buildings. And as existing low-income housing stock is rapidly disappearing due to gentrification, forcing low-income people out of their neighbourhoods, renters, specifically those with low incomes, are ignored. Instead, homeownership has been cemented as the bedrock of the BC Liberal agenda.

Is Social housing over?

Social housing, as we once knew it, is no longer. Canada’s Federal government withdrew from funding low-cost social housing in 1993 and municipal governments in BC continually approve gentrifying developments such as Vancouver’s Downtown Eastside Local Area Plan, and Burnaby’s Metrotown Plan. Burnaby’s plan will displace an estimated 3,000 people to make room for new condominiums unaffordable to current residents.

BC’s Provincial government has made some investments into housing, but it has come with a cost to residents’ independence and privacy. “Supportive housing” is subsidized housing that staffs front desks to secure the building through guest sign-in sheets, I.D. checking, and security cameras for staff-access only. Effectively, the government has replaced social housing with buildings equipped to track the movements of the poor.

The policies of the BC Liberals are designed to serve land speculators, investors, and the wealthy home-owning class because that’s who they represent. The BC government website describes the BC Home Owner’s Grant as a grant that “reduces the amount of property tax you pay for your principal residence.” Why is the government subsidizing home ownership instead of investing in social housing for people dying on the streets?

What’s the point of having a Residential Tenancy Branch (RTB) if it’s not protecting the people who most need protection? For those living with mental health illnesses, social service advocates working with organizations, like ARA Mental Health and MPA Society assisted low-income renters with their RTB dispute resolutions but have recently been defunded by BC Liberal cuts.

The best chance you’ve got if you’re a low-income person looking for a place to live independently is being approved for a temporary housing subsidy funded by the Province and managed by a nonprofit that decides if you deserve the subsidy. These subsidies are scarce, and recipients are selected based on the nonprofit’s own criteria and prejudices. And if you get a subsidy you will need to compete with other renters to find a private market landlord that’s willing to rent to you despite your low income. 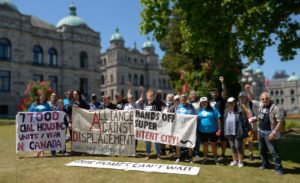 The BC NDP election platform promises to “build 114,000 new rental, social and co-op, and owner-purchase housing units.” They do not say how many of these units will be social housing at welfare rate. Even if every penny of the $265 million per year they pledge to spend was put into new social housing, it would only build 1,325 units of housing per year; less than one-third of the homeless counted on the streets in Metro Vancouver this year and less than one-tenth of the social housing we need built every year BC-wide. But only a small portion of that money will go towards building social housing.

The NDP platform also promises an “annual rental home credit of $400” to renters in BC (to be paid out of the $265 million that also is supposed to cover the cost of new rental and “owner purchase” housing). This works out to more than half of their annual projected housing budget but only $33 per month for renters. The NDP wants to look like the party that will protect renters, but not at a cost. They also say they will close the fixed term lease loophole that allows landlords to evict residents after a certain amount of time, but they will not end the rent control loophole that incentivizes evictions by allowing landlords to raise the rent to any amount between tenancies. There is no indication that the NDP is willing to spend the money necessary or restrain landlord profits to give people a home and keep people alive.

Our goals can only be won through independent struggle organized with and led by those most directly and severely impacted. There are positive examples to look to. One of the most successful and recent struggles was Super Intent City in Victoria where people looked after each other and created community power by organizing together. Eventually, after a long fight, the provincial government was forced to provide housing to tent city residents. More tent cities and refusals to be evicted are in the works like in Burnaby’s Stop Demovictions Campaign.

As low-income organizers say in Burnaby: “Hell No, We Won’t Go!” It’s only through resistance that we can win.

Kwantlen Nation digs in against the Kinder Morgan pipeline expansion