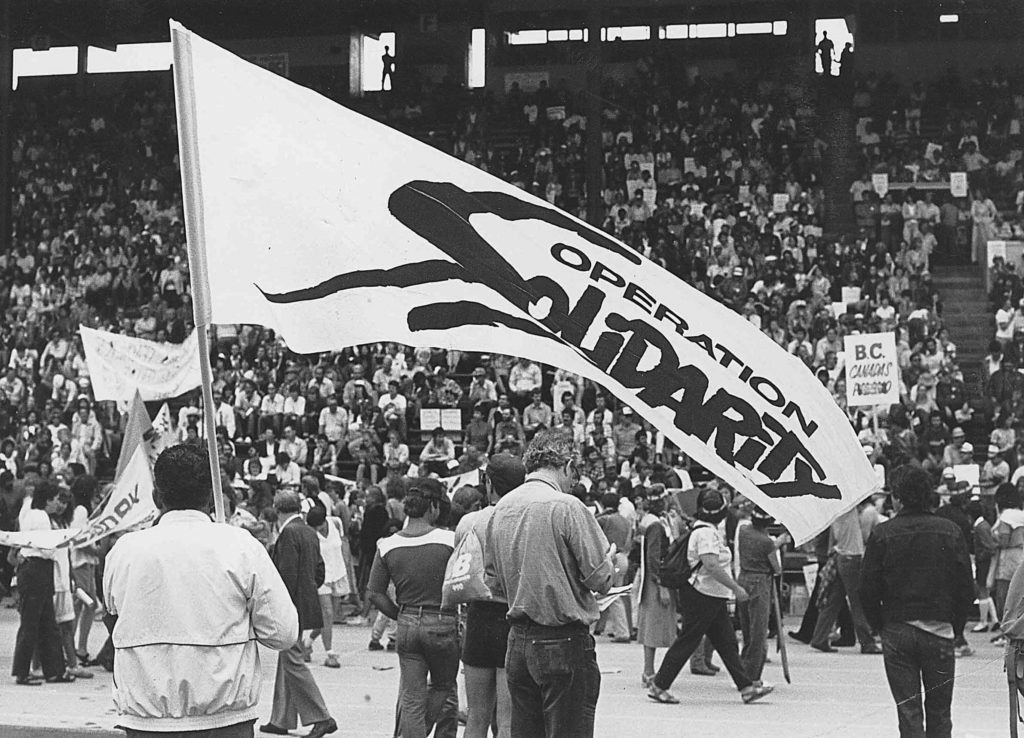 In the two decades after World War 2, Canada and the United States, alongside Britain and other Western European countries, drew in enormous wealth from the profits and power from winning that war. This inflow of wealth, along with Canada’s preferential trade and diplomatic connections to US imperial power, smoothed over tensions between Canadian industrial capitalists and the majority white, unionized workingmen they employed. Postwar “labour peace” promised long-term job security and a “family wage” for members of this white, suburban, single income earning working class.

Alongside corporate “labour peace,” the Canadian government began welfare-state policies that used taxes to redistribute corporate super profits beyond those directly employed in industry to the unemployed, elderly, and young. The redistributive social programs of the postwar period were won largely through the militant union actions of women workers, who took leading roles in industrial unions during WW2 and fought for government-guaranteed social security independent of waged workplaces. The common sense of the time was that because capitalist society generated wealth as well as poverty, society had a responsibility to care for the poor that it produced. It wasn’t socialism, but it was a change from the “individual responsibility” free market capitalist ideals of the first half of the 20th century that justified government inaction, even during the Great Depression.

This summary of the postwar years can make it sound better than it was. In truth, the welfare state was not as well-resourced as it needed to be to make everyone’s lives secure and healthy. Also, social programs were administered through racist, sexist, and colonial frameworks that meant poor white families got better treatment than gay men and single mothers, who were sexually shamed. Black communities were attacked and broken up with slum clearance programs in Halifax and Vancouver, and northern Indigenous communities were displaced off their lands with colonial, modernizing “relocation” schemes.

The corporations weren’t too pleased with the postwar welfare state. By 1977 they formed the Business Council on National Issues; it was made up of big banks, insurance companies, oil and manufacturing and media companies. So-called think tanks like the CD Howe Institute went into action, writing briefs, giving speeches, putting out reports, and getting the media they owned to report on their reports, speeches, and meetings with politicians. They always supported policies that would make wages lower, corporations richer, and weaken government power to regulate and control them. In BC, the Fraser Institute formed to oppose what they called the “socialist” NDP government of Dave Barrett. These professional right wing intellectuals launched a propaganda offensive against the welfare state, as part of a new political trend also popular in the USA, where it was called Reaganism, and Britain, where it was called Thatcherism. More generally, people refer to it as neoliberalism.

In 1982, Canada was in a deep economic recession and the government appointed the MacDonald Commission, which came up with two recommendations that were bad for low income people: “free trade,” a corporate rights deal that would allow corporations to move to whichever country had the lowest wages and taxes; and a big business version of a guaranteed annual income, proposed by the Canadian Manufacturers Association. MacDonald wanted a GAI, which he called a Universal Income Supplement Program, so employers wouldn’t have to pay minimum wages and so government could abolish other programs like social housing (which the federal government did in 1993), federal contributions to provinces for welfare (done in 1996) and the guaranteed income supplement for low-income seniors (thankfully we still have this).

MacDonald said the way you reduce unemployment is to “facilitate rapid job search and increased job holding,” not to increase the number of jobs. At the same time, another prominent right wing think tank, the CD Howe Institute, began pushing for government to reduce the deficit by cutting social programs.

But how do you justify all these cuts that are going to create more poverty? Neoliberal propagandists used postwar cultural identities of class, gender, and race to appeal to a longstanding white nationhood and push their tax reform agenda. They appealed to “hardworking” industry working men, whose families held a settler entitlement to Indigenous land as well as racist ideas of immigrant workers “stealing jobs.” The neoliberal propagandists did this by demonizing people who use welfare and what was then called unemployment insurance. The CD Howe’s John Richards wrote that the main point of social policy was to change the behavior of able-bodied people, presumably so they would take crummy jobs. The Fraser Institute shoveled out reports on welfare abuse. They said poverty “is simply not a major problem in Canada.”

The Fraser Institute called people who were poor “dependent.” They needed an “incentive to work.” The poor, they said, should be involved in “social policy experiments” like lab rats. People on welfare were “chronic users.” In Newfoundland the corporate media called welfare a syringe. Worst of all, the major media embarked on a huge campaign to falsely accuse people on welfare of fraud and of being lazy. CD Howe said people had an “obligation” to work for their welfare.

The media went ballistic with accusations. The Financial Post lied about the amount of money that people on welfare were eligible for. A column in the Vancouver Province said inaccurately that welfare “carries no responsibility to be honest or seek independence.” Poorbashing, the act of blaming low-income people for their own poverty, has since become the go-to explanation for poverty and homelessness, but in the 1970s it was a huge effort because it was pushing against the common sense of the postwar years that said poverty was a social problem.

To make the poorbashing pill easier to swallow, the neoliberal propagandists also used familiar white nationalist narratives. The Vancouver Sun had a whole series of front-page articles falsely accusing people from Somalia of collecting welfare to buy arms for Somali warlords. Not a shred of proof was provided. The Sun and Province personified “scammer” and “deadbeat” welfare recipients as political, gender, and racial deviants. Clayoquot Sound protesters were portrayed as “unwilling” to work; a Sun article in 1993 referred to an Iranian man on welfare as a “parasite” outsider in a bid to cast all refugees as undeserving of public support, and single mother welfare recipients were portrayed as “frauds” because of their gender deviance. A Province article in 1995 claimed, “A mother collects welfare for herself and her kids but doesn’t let on she has a boyfriend or a common-law husband supporting the family. It’s the most common type of welfare fraud and one of the easiest to perpetrate.”*

Rather than attack the values of taxation and social welfare directly, the neoliberal propagandists cut the strings of the social safety net by focusing on those who fell afoul of white, capitalist identity politics of race, gender, and political normalcy.

The BC Liberal legacy is making the new normal

The labour movement’s fiercest attempt to refuse neoliberal propaganda was the “Operation Solidarity” movement of 1983, when a community-labour coalition formed to fight against the austerity and anti-union agenda of the BC Social Credit government. Operation Solidarity slowed the Socred offensive, but it did not overcome the neoliberal turn overall; it wasn’t long before the labour movement and its NDP politicians began to swim with the neoliberal current.

In 1995, the BC NDP government set up its own committee to frame how it saw welfare. They fired Joan Smallwood, a social worker who was their Minister of Welfare at the time, who tried to get policies that reduced poverty. They brought in Joy MacPhail as a new minister who cut welfare along the cultural identity lines established by the propagandists and their newspapers. Through McPhail the NDP slashed benefits from $546 a month for a single person to $500, made single parents look for work when their youngest child was 7, down from 12, and denied welfare to people from out of province. By the time Gordon Campbell was elected in 2001, the labour movement had restricted their main slogan to “Campbell’s Cuts are too deep,” showing that they had generally accepted austerity as a government policy, and expecting more-or-less the same from the NDP.

The insight that neoliberal propagandists use white identity politics to pursue their economic goals comes from theorist Lisa Duggan. In her book Twilight of Equality? she writes, “Neoliberalism, a late twentieth-century incarnation of Liberalism, organizes material and political life in terms of race, gender, and sexuality as well as economic class and nationality, or ethnicity and religion.” But, she adds, these cultural vehicles of economic policy “actively obscure the connections” between culture and economy. To fight the BC Liberal legacy we have to first analyze and explain the connections between the cultures and ideas they use to package their free market fundamentalist policies. To crack their neoliberal normal we have to build political movements and consciousness that are not simply about economic reforms – we need to wrap our anti-capitalist, anti-colonial policies and politics in corresponding cultures, ways of seeing and being. A better government is impossible, a better world is the only way.

*These Province and Sun examples come from Judy Mason-Lee’s 1997 Master’s Thesis, “The social construction of welfare fraud: The impact on front-line workers and welfare recipients in British Columbia (1993-1996)”

Editorial: BC Liberal mould has infected the walls of the house and only the people can get it out