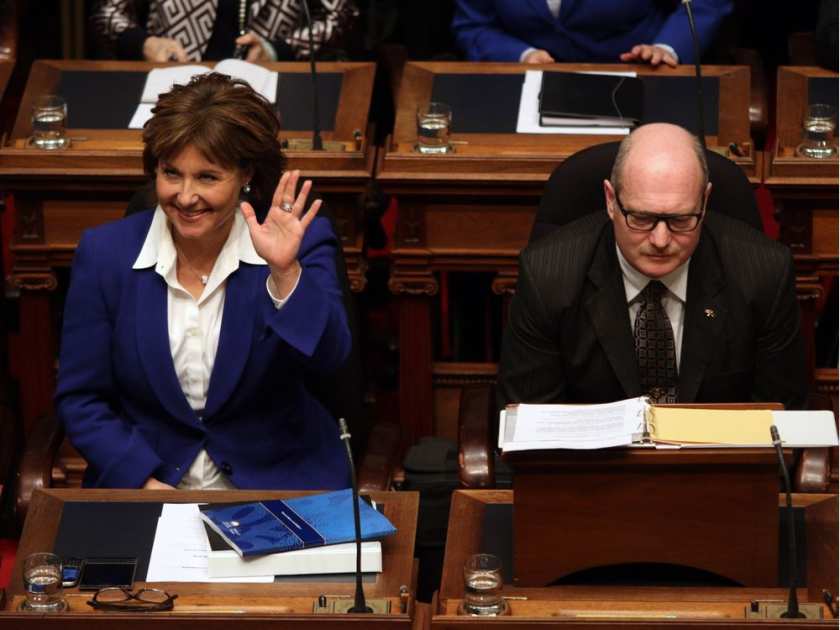 The BC NDP 2017 election platform has been celebrated as a bold and progressive challenge to the BC liberals. The Globe and the Mail says the new democrats propose “tax hikes on the rich,” meanwhile the CBC says the “NDP’s platform is populist and progressive.”

But are the BC NDP actually promising to impose tax hikes on the rich? Is the platform even progressive? After nearly two decades of successive BC Liberal tax cuts, what alternative to neoliberalism is the NDP proposing? In the 2013 provincial elections the NDP under Adrian Dix announced they would not repeal the BC Liberal cuts – not even moderately. Has anything changed since then?

While the right wing turn in BC started in the 1980s, the tax cuts and austerity measure of Social Credit were deepened with the election of Gordon Campbell and the BC Liberals in 2001. Only one month after getting into office, Gordon Campbell slashed personal income taxes by 25%, eliminated the corporate capital tax on non-financial institutions (forfeiting $273 million overnight) and reduced the general corporate income tax rate from 16.5% to 13.5%.

In 2008, the corporate capital tax on financial institutions was also abolished, freeing up another $117 million annually to BC millionaires. By 2010, the corporate tax rate reached a historical low of 10.5% and personal income taxes in B.C. became the lowest and most regressive in the country for most tax brackets.

To make up for the loss of taxes paid by the rich, the BC Liberals increased and introduced regressive flat taxes, which are disproportionately paid by poor people. MSP premiums for example have more than doubled since 2000. Campbell also pushed two regressive taxes – HST and the Carbon Tax – before stepping down in 2011.

Christy Clark has more or less continued Gordon Campbell’s austerity legacy, and has put particular effort into alleviating the tax “burden” of the oil, gas, and resource sector. Over the last five years, the provincial government has extended more than $1 billion in the form of tax credits to oil and gas companies.

The BC liberals have also expanded and deepened subsidies to homeowners. In 2016, the Liberals announced they would offer loans to first time homeowners, covering up to 5% of the home’s purchase price, to a maximum purchase price of $750,000. First time homeowners would also be exempt from the property transfer tax, which could save them up to $7,500 when purchasing their first home. The program will cost the government about $703 million annually.

At the same time, Christy Clark also increased the threshold for the 60 year old BC home owner grant from $1.2 mil to $1.6 mil. The program provides a $570 break in property tax to people who own homes worth less than $1.6-million, and now costs the government about $820 million per year. Taken together, the provincial government now subsidizes the real estate market to the tune of somewhere around $1.25 billion each year.

Lower income households barely gained any savings in taxes and ended up losing out significantly more overall, as any tax cuts were cancelled out by increased MSP premiums, eroded social services, stagnant social assistance rates and a worsening housing crisis. The overall effect of the tax cuts has been to significantly shift the tax burden from corporations to working and low-income people. One striking sign of this shift is that the BC government now collects more income from the regressive MSP premiums than it does from corporate income taxes.

What do these tax cuts mean in terms of changes to income for individuals? According to a CCPA report, “tax cuts between 2000 and 2010 delivered an average of $9,000 per year to the richest 10 per cent of BC households, and a whopping $41,000 to the top one percent.” [1] As a result of these tax cuts, BC now has the highest inequality of wealth in Canada. According to a report by the Broadbent Institute, the richest 10% households hold 56.2% of the wealth, the bottom 50% of households hold 3.2% of the wealth.

What will NDP do about BC Liberal tax cuts?

So what is the NDP proposing to counter almost two decades of tax cuts? Very little and in fact almost nothing. The general principle of the platform is to work strictly within the BC Liberal’s framework of austerity, tax cuts, and state subsidies for private corporations. Whether it’s the housing platform or the jobs plan, the core NDP principle is to “leverage” and “partner” with the private market.

In the previous NDP campaign of 2013, Dix’s promised to reintroduce the corporate capital tax on financial institutions. The 2017 platform has abandoned this basic principle, moving yet again to the right. This year the BC NDP is only proposing a meagre 1% tax increase for corporations. An increase of 1% would bring the corporate tax rate back to 12%. This same tax was 16.5% before Gordon Campbell slashed it in 2001.

In one small exception, the NDP proposes to reverse Christy Clark’s recent tax cut on personal income for the top 2%. In 2013, the BC Liberals implemented a new 6th income tax bracket at $150,000 of income, albeit only for two years. The temporary tax brought in $227 million in revenue in 2014/15, but expired at the end of 2015. While reversing this tax cut is not unimportant, it is literally the most basic and minimal measure the BC NDP could take to make taxes more progressive. Apart from the tax on the 2%, the current NDP platform does not mention personal income taxes whatsoever.

NDP have repeatedly shown… they will not raise taxes on the so called middle class. In 2013, NDP Leader Adrian Dix said, “I don’t think there is any room for income-tax increases on the middle class.” Horgan’s party has indicated that they feel the same, in line with the Liberals’ promise of a four-year freeze on personal income taxes.

Seth Klein with the CCPA noted during the 2013 election that the “NDP leader’s plan to boost taxes on those earning over $150,000 and to raise the corporate tax rate to 12 per cent has only sparked a ‘collective yawn’ from B.C.’s wealthy and its top corporations.” The same goes for this election. Even BC Liberal chief of staff Martyn Brown writes, “a one percent increase to the general corporation income tax rate is anything but radical. Ditto for the minor personal income tax hike that would only be applicable to the top two percent of taxpayers, with annual incomes over $150,000.”

On the whole, BC NDP is not campaigning on taxing the rich. In fact,  more about keeping the tax cuts and in some instances even lowering taxes. For example, like the BC Liberals, the BC NDP is also campaigning on decreasing the tax rate for small businesses to 2%. It has already been lowered from 4.5%, and it literally can’t get lower. This was the same failed strategy pursued by Tom Mulcair and the federal NDP when they mimicked Stephen Harper’s small business tax plan.

Furthermore, instead of abolishing the BC Liberals’ homeowner tax credit, which provides a $570 break in property tax to people who own homes worth less than $1.6-million and which costs the government about $800m annually, the NDP wants to continue this policy and add yet another subsidy to the real estate industry. In Horgan’s words, “If homeowners can have a home owner grant, renters should be able to have a grant as well.”

Despite being loud critics of the free loans to homeowners, BC NDP is not either planning to repeal this subsidy for the private mortgage market. According to David Eby, “If the NDP were to win the May 9 provincial election, the party wouldn’t cancel “the stupid program” but would conduct a review to unveil smart ways to help B.C. residents in the entry-level housing sect.” In other words, NDP will continue to keep subsidizing the real estate industry to the tune of 1.2 billion / annually, while only spending a total of $265m on housing affordability programs.

Tax the rich and house the poor

Their refusal to tax the rich means that rare tax-and-spend items – like $10/day childcare – in reality don’t have any money behind them and will instead be rolled out over a ten year period. As a result, a whole new generation of working class families will be forced through the dangerous, exploitative, and unaffordable private childcare system in BC.

Similarly, the NDP promise to build 114,000 new co-op, social, rental and owner housing units (over ten years) is marked by the same funding problem. The plan is only backed up by a meagre budget of $265m per year, presumably to be used mostly for market-priced and market-built rental units and no social housing targets whatsoever. Furthermore, as if that small budgeted sum were not spread thin enough, keep in mind that the $265m figure also needs to be used for the NDP’s Reagan-inspired $400 rebate voucher for renters – again another state subsidy sent directly into the pockets of private landlords.

Taken together, the BC NDP platform this year is so far to the right that even Gordon Campbell’s former chief of staff, Martyn Brown, has come out in support of it. Brown writes, “As someone who has authored four election platforms, including three for the Liberals, Horgan’s platform also works for me as a political document. It is artfully crafted, with just the right balance to appeal to a winning coalition of voters on the left and right.”

Whether at the federal or the provincial level, the NDP now chases after a relatively small and politically elusive “middle class.” This dream of being a middle class party is not innocent: it comes at an enormous and disproportionate cost to urban and rural Indigenous people, working class communities, and all oppressed masses who fight to survive under the ruthless capitalist system. This is why the NDP’s win-at-all-costs logic can never be a win – it can only bring the party to power on a mandate that by definition excludes those it claims to represent.

From serving workers to serving the NDP – Electoral pragmatism and the end of a fightin’ democratic unionism: An interview with BCTF activist Tina Anderson by Ivan Drury