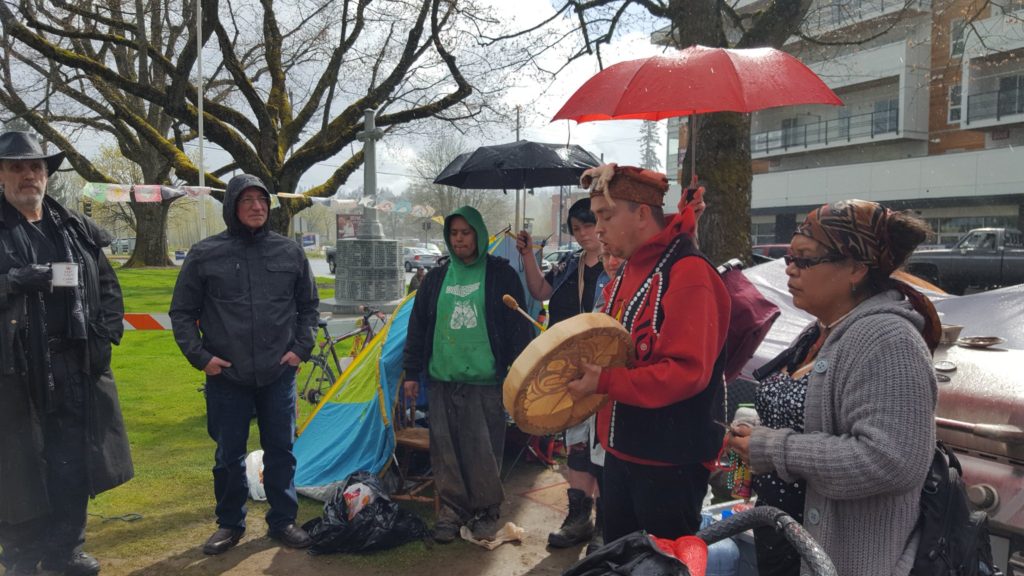 On Tuesday April 18th, the City of Duncan won an injunction against homeless residents who are camped at Charles Hoey Park. The permanent injunction gives the City the power to use police force to remove homeless people with less notice than any other anti-tent city injunction in BC history. Tent city residents were given until Thursday April 20th at 3pm to vacate the park.

On Friday, the cops moved in to destroy the camp, arresting supporter Chrissy Brett on day 15 of a cultural fast to protect homeless and urban Indigenous people. Duncan City Council’s move to displace and hide away this crisis by court injunction is a testimony to the tried-and-failed methods of managed homelessness used by Councils in cities throughout BC.

According to a point-in-time homeless count conducted in Duncan on February 21st, there are 83 people living rough and 74 people considered “hidden” homeless in Duncan. The 20 person camp in Duncan was set up as a response to the March 16th eviction of people from the Warmland House & Outreach Center operated by the Canadian Mental Health Association. Speaking with residents at the camp, I was told that the shelter rules are unreasonable and inconsistent, resulting in sometimes indefinite bans. People told me that they didn’t know where they would go after the eviction from the tent city.

The shelter now says it has capacity for the campers and will allow previously banned people to return, provided they are on “good behavior.” However, I heard contrasting stories from campers. According to Celestine Norris, “I was banned from the shelter for life. Now that we have to leave the tent city, they told me they will review my file… in one month.”

Saying shelters are not homes and are not a solution to homelessness, residents of the tent city are calling for permanent social housing, a youth shelter, and space in cities for urban Indigenous and homeless people to set up permanent shelters that will not be subject to bylaws that require people to take down camp every day. 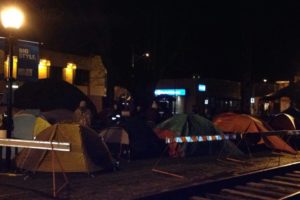 Homelessness is an Election Priority!

While City Councils all over the province bear responsibility, they are not alone in creating the homelessness crisis. BC is experiencing the worst housing crisis in history and no political party is talking about homelessness. On April 10, Metro Vancouver’s 2017 homeless count was released, announcing that homelessness has risen 30% since last year. The Duncan tent city is testimony to the BC-wide relevance of this count.

The federal and provincial levels of government have offloaded the duties of providing homes to cities, but cities themselves do not have all of the resources necessary, or the political willpower, to confront homelessness. The government’s pass-the-buck attitude about homelessness is certainly frustrating. However, criminalizing homeless people, which appears to be the primary approach in municipal responses to homelessness, does nothing to address the root causes of the crisis or provide real solutions for people experiencing homelessness.

Duncan tent city leaders, veterans from last year’s Victoria Super InTent City, and Alliance Against Displacement is calling on City Council to work with its homeless residents to advocate for Provincial and Federal housing funding, and to support them as residents of their city, rather than using police to displace them.