We are writing regarding the impending removal of the Georgia and Dunsmuir viaducts and the importance of appropriately honouring and making restitution to the Black community which was displaced by the City by building those viaducts. It is essential that the legacy of Hogan’s Alley be appropriately honoured in any new plans that the City is making for the area.

Alliance Against Displacement (AAD) is a grassroots organization that organizes with communities facing displacement on stolen Indigenous lands in “British Columbia”. From its inception British Columbia was built by displacing Indigenous communities through the pairing of colonial and capitalist displacement, which has since continued unabated. The displacement of the Black community of Hogan’s Alley in the 1970s was a precursor to Vision’s current gentrification policies that are displacing people in the Downtown Eastside out of their homes and communities. This economic and social displacement is disproportionately affecting Indigenous people and people of colour as a result of the intersections of racism and poverty. 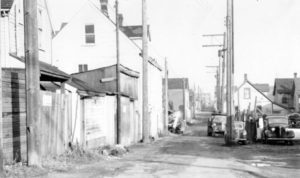 In the 1970s the City first targeted the Black residents of Hogan’s Alley on the premise of ‘slum clearance’, i.e., displacement as a state ‘solution’ to poverty – a tactic continued by all levels of settler government today. Displacement was accelerated as a result of the ‘urban renewal’ movement that swept North America, premised on the rise of car culture and the concept of people living in suburbs and commuting to work in the city. To achieve this goal governments built freeways to connect outlying residential areas with urban cores. Cities expropriated homes and lands for these developments, and reflecting the foundation of institutional racism intrinsic to North American land use, these expropriations consistently targeted Black or Chinese neighbourhoods that Councils like Vancouver’s considered the most disposable and expendable, and that also had the least political power to fight back.

In Vancouver, the City originally targeted both Chinese and Black communities, proposing freeways through the Black community of Hogan’s Alley and through the largely Chinese residential neighbourhood of Strathcona. Vancouver’s freeway plan was only partially realized, with the only portion built being the Georgia Viaduct which obliterated the Black homes and businesses of the Hogan’s Alley community and dispersed Black families throughout (and out of) the city.

Black activists involved in the Hogan’s Alley Memorial Project have cautioned that the lessons from the destruction of Hogan’s Alley are highly relevant today, particularly the impacts of contemporary gentrification which are similar both in motivation and outcome of historical “urban renewal” movements: mass displacement. As an organization working with multiple low-income communities we see the brutality of gentrification and associated displacement and criminalization of people who are poor most obviously in the Downtown Eastside of Vancouver, but also in other cities such as Burnaby, Surrey, Maple Ridge, and Victoria. Additionally Black activists point out that the displacement at Hogan’s Alley is evidence that top-down planning leads to displacement when people who live in neighbourhoods are not involved in decisions that affect their homes, livelihoods, and social and cultural networks. This principle aligns with AAD’s mandate of development of people’s power in working class and Indigenous communities and building alliances between our struggles.

Removing the viaducts is both an important opportunity to acknowledge the injustice and the displacement of the Black community of Hogan’s Alley and implement substantive reparations, and also a potentially perilous moment of intensification of gentrification and further displacement. We strongly believe that any new plans that the City is making must honour the history of Hogan’s Alley and make restitution to Black people who lived through the displacement and to their descendants, as well as to Black communities as a whole for the cultural implications of displacement.

We call on the City to take seriously the ideas coming out of Black activist organizing for Hogan’s Alley, including:

We want to emphasize that given the City’s direct role in the racist and unjust displacement of the Black community of Hogan’s Alley, which was part of a systematic, intentional dismantling of Black community to service economic development for a privileged few, a symbolic apology is not sufficient. Meaningful reparations must also be committed to, to address the economic and cultural harms of the City’s actions.

It would be a further injustice and compounding harm if the City ignores Black communities’ needs in the planning process following removal of the viaducts.