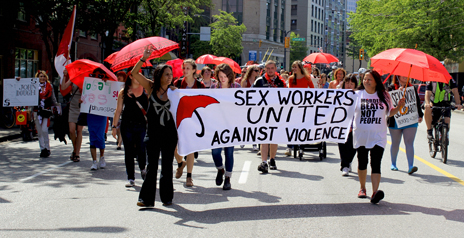 This article about the Vancouver Women’s Library has been pulled by The Volcano. After posting it on Sunday night we were approached for further discussion by members of the community involved in protesting the Women’s Library. We plan to re-post an article with changes that reflect these discussions.

In February a public conflict emerged between a new space called the Vancouver Women’s Library, and trans women, gender non-conforming people, and sex worker communities who were excluded by the collective operating the Library. The collective behind the Women’s Library comes from a strain of feminism with a significant history and base in Vancouver, which believes that trans women are not real women, and that sex work is abusive in all cases, and not a form of work. When this conflict took on public and even international dimensions, some supporters of trans and sex worker opponents of the Library drafted a public letter to rally the community, titled, “Open letter against transmisogyny and anti-sex work rhetoric in Vancouver.” The Volcano newspaper editorial collective stands by the principles underlying this statement, and is proud to endorse this letter.

The article below, written by one of those who rallied to protest the opening of the Women’s Library, provides a more thorough background and analysis of the meanings of this conflict. For our communities in struggle for justice against displacement by real estate economies, dispossession by resource extraction, racism and nationalism at Canada’s borders, and everywhere in between, we believe, as this article argues, that there is no place for transmisogyny and sex work prohibitionist repression in our struggles. We stand with sex workers against Trudeau’s anti-sex work laws, and with trans and gender non-conforming people against transmisogyny in all its forms.  – Eds.

Federal government’s message to homeless people: get a good tarp and sleeping bag and prepare to die young

#Squat2Survive! Homeless communities must take over vacant buildings to escape…