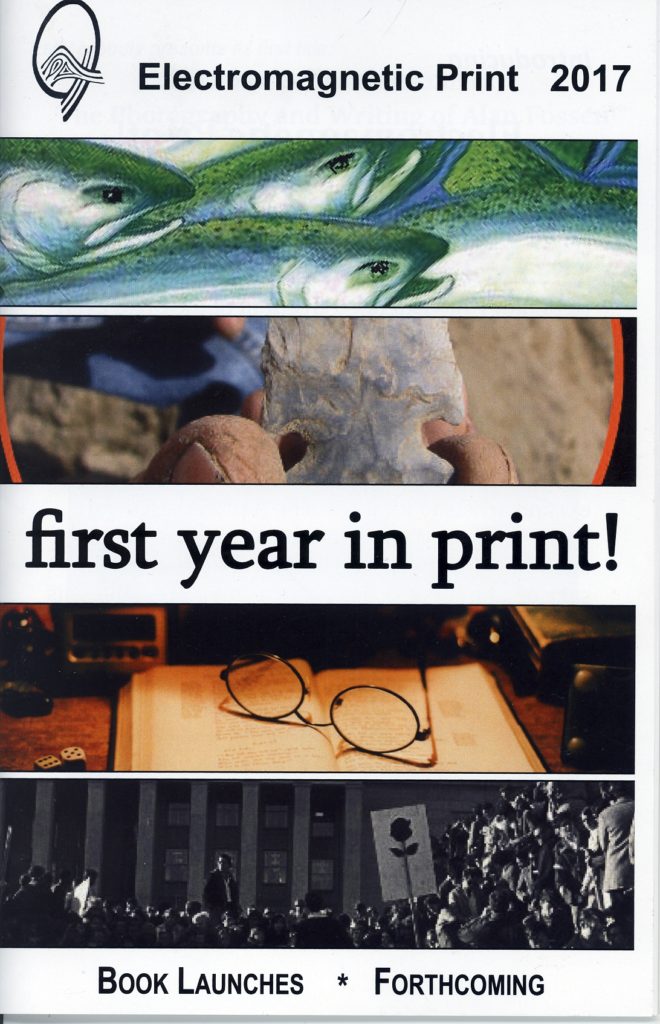 Electromagnetic Print (EMP) is an ambitious new publishing venture based in Coast Salish Territories. The resonance of the short form of the name (EMP – electromagnetic pulse) is deliberate – reflecting an intention to produce works that will “make you stop.” Stop for something profound, something revolutionary, something beautiful.

The person behind the undertaking is Kerry Coast. Authorship of The Colonial Present: the Rule of Ignorance and the Role of Law in British Columbia (2013) and editorship of The St’at’imc Runner (a Lillooet Tribal Council newspaper 2006-2011) are some of the prior experience that Coast brings to this project. The announced scope of the press includes art, literature, politics, history, and children’s. One further aim is to work with language teachers and Elders to produce Indigenous language publications and curriculum materials. The press “aims to fix for time glimpses of the way” that we exist. Apparent in connection with this statement is a guiding desire to present the work of persons who “don’t fit bulk commercial trends.”

Reflections on the meaning of publishing in a capitalist society

This writer would like to offer brief comment on the engagement that EMP is taking on with this kind of alternative press. Briefly put, Kerry Coast is embarking on a labor of love, seeking a mode of communication that promises to overcome some of the crippling constraints of capitalism.

In theory, anyone can publish a book. That’s much like saying any ordinary person can write a book. All it takes is pencil and paper. Even with no significant funds required, there remains the substantial matter of learning how to do the work, and developing an adequate level of skill. In both cases, the obvious overwhelming investment is personal time and effort.

Over the past decade or so, electronic publishing has evolved into offering up various “packages” that make it possible to pay for someone else to do any or all of the publishing tasks. A quick check around shows that current cost for a smallish basic package starts at $700. What this digression boils down to is that EMP appears to be willing to stand in the middle for writers and artists who can further the values that the press pursues. A check on this assumption brought the following reply from Kerry Coast:

While EMP is currently accepting all kinds of submissions and ideas, it is not a publisher-for-hire. EMP is independently owned and operated, unencumbered by obligations to funders of any kind.

As an occasional publisher since 2005 under the Quarter Sheaf imprint, I have produced books with no financial involvements beyond computer hardware, one piece of software, manuals for the software, and an internet connection.  It is now possible to do this sort of work with absolute zero money through a facility like the Digital Inspiration Lab at Vancouver Public Library.

EMP is possible because of recent developments in digital technologies. Lowered costs now open up the publishing process to people who are unable to afford expensive equipment. The opportunity to deal in small print runs or to issue e-books sets a foundation for innovative place-based cultural work. Unlike establishment publishing, EMP looks forward to exercising a rare freedom: “A small press like this does not require the state subsidy which is often bought with self-censorship.”

EMP’s first titles show especially strong connection to Indigenous cultural and political struggle. Perhaps the most striking announcement in the catalogue is for Wolverine’s Sovereignty: Collected Essential Truths. Publication is projected for Fall 2017 and control of the publication will remain with his family, proceeds will go them, their farm and home. Wolverine (William Jones Ignace), a key figure in the 1995 Gustafsen Lake standoff, died at age 82 in March 2016.

The first book to launch from EMP in 2017 will be Freedom in East Vancouver: the Photography and Writing of Alan Fossen, on 19 March at 7:00 pm at Cafe Deux Soleils on Commercial Drive in Vancouver.

In his early seventies, photographer and writer Alan Fossen hails from the Kootenays and has lived in BC all his life. Resident in the Commercial Drive area of East Vancouver since the 1970s, he had long association with the radical La Quena co-op coffeehouse of the 1980s and 90s.

The main content of his book is 162 images spread across 190 pages.  Some two-page spreads consist of a single photograph with no margins. Printed on heavy-stock low-gloss paper, colors leap from the page. A book size of 11 x 8.5 inches provides generous gallery space. Certain types of images recur. Human faces and graffiti seem to account for well over half of the photographs. No image is accompanied by a caption. The main source of orientation is the context provided by eleven section headings.

The foreword by Kerry Coast announces the setting of Vancouver in the 1990s. The final “Postcards” section includes a selection where postmarks from that decade can be spotted on reproduced postcards.

Fossen’s eight short essays appear under the following section headings: Fascism, Criminalization of the Poor, Holocaust, Marlene Maria Lucille Crazybull Vielle, Racism, Best Explanation of the Cold War, Politics of Food, and La Quena. The life story of Vielle stands out for its empathy and humanity.

The reflections on La Quena start with mention of Chilean refugees who fled the Pinochet regime in the early 1970s. Their activism is reported as the impetus for the creation of the venue. Latin American struggles in Nicaragua, El Salvador, and Chiapas also came into play. On the home front, the Gustafsen Lake standoff loomed large. Fossen touches on the aspects La Quena as a place that served as forum, informal classroom for political education, and anti-hierarchical workspace. His brief but honest account ends with mention of some of the internal activist tendencies and problems that led to the demise of La Quena.

As a record of place and time, two images might serve as bookends for the period depicted in the photographs. At the older end, a fading stenciled graffiti on a yellow brick wall proclaims: Boycott Expo – See Through Their Lies. The smaller and longer phrase has become almost unreadable. At the newer end, a double-page interior view of La Quena captures a scene that vanished at the turn into the third millennium. Google research today provides only a few hints about the lifespan and demise of that significant social space. The positioning of the La Quena section at the end of the book creates a mood of times that already seem long ago.

Fossen’s book and seven forthcoming titles are listed at www.electromagneticprint.com and in a twenty-page catalogue for 2017.