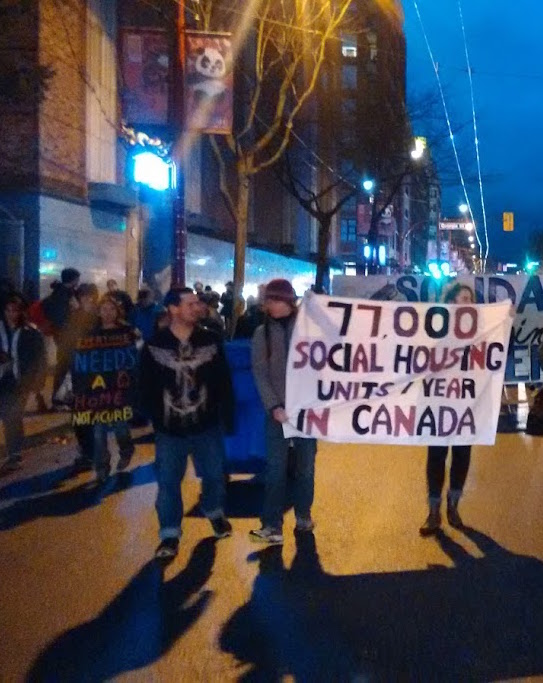 The BC government says it’s the “largest single-year housing investment by any province in Canada,”  $500 million for about 2,900 housing units across BC. But what does their announcement mean for the 1,000 homeless people in Vancouver’s Downtown Eastside and thousands of other homeless people in the province? Not much.

The BC Non profit Housing Association says we need about 3,000 social housing units EVERY YEAR, just to accommodate population growth in Metro Vancouver, not the whole province. The Canadian Centre for Policy Alternatives says there is “every reason our governments could move forward with an ambitious build-out program that would see the construction of 5,000 to 10,000 new units of social or co-op housing per year.” Based on their estimate that there are over 100,000 people living in forms of homelessness in BC, Alliance Against Displacement calls for 10,000 new social housing units per year to end homelessness.

There are two additional problems with the government’s announcement, beyond the woefully inadequate number of units. First, the $500 million is a one-time pre-election cash injection, not an annual commitment. And second, we don’t know how many of the units will actually be for low-income people. Many of the descriptions of who is getting the money, where, and what for, say that the housing will be for “families” or “seniors” without saying what the rents will be.

The 2016 homeless count says there are 1,000 homeless people in the Downtown Eastside of Vancouver. The provincial announcement will only fund about 96 additional new units at 6 DTES sites, but we still don’t know how many of these will have welfare/pension level rents. Beyond the DTES, the 2016 homeless count found there were more than 1,100 newly homeless people Vancouver-wide. Ninety-six new units will guarantee that homelessness will continue to escalate.

One interesting feature of the provincial announcement is the amount of money per unit that the province is paying to different housing providers. For example, in Vancouver the province is paying the city $4.8 million or about $21,500 per unit to rebuild Roddan Lodge as a 223 unit mixed income building. They are also paying Beedie developers $7.3 million for 25 units of seniors housing, or $292,000 per unit. Why is the province paying the non-profit group more than ten times less per unit than they are paying the profit making developer, Beedie? The Beedie site is one that the Chinatown Concern Group and others are calling on the city to buy and use for 100% welfare/pension rate housing.

Even if it was all used for social housing construction, Christy Clark’s $500 million would build about one third of the units needed across the province EVERY YEAR. The BC Liberal election promise is a drop in the bucket.

Meanwhile, the NDP hasn’t said how much it will spend on social housing if elected.