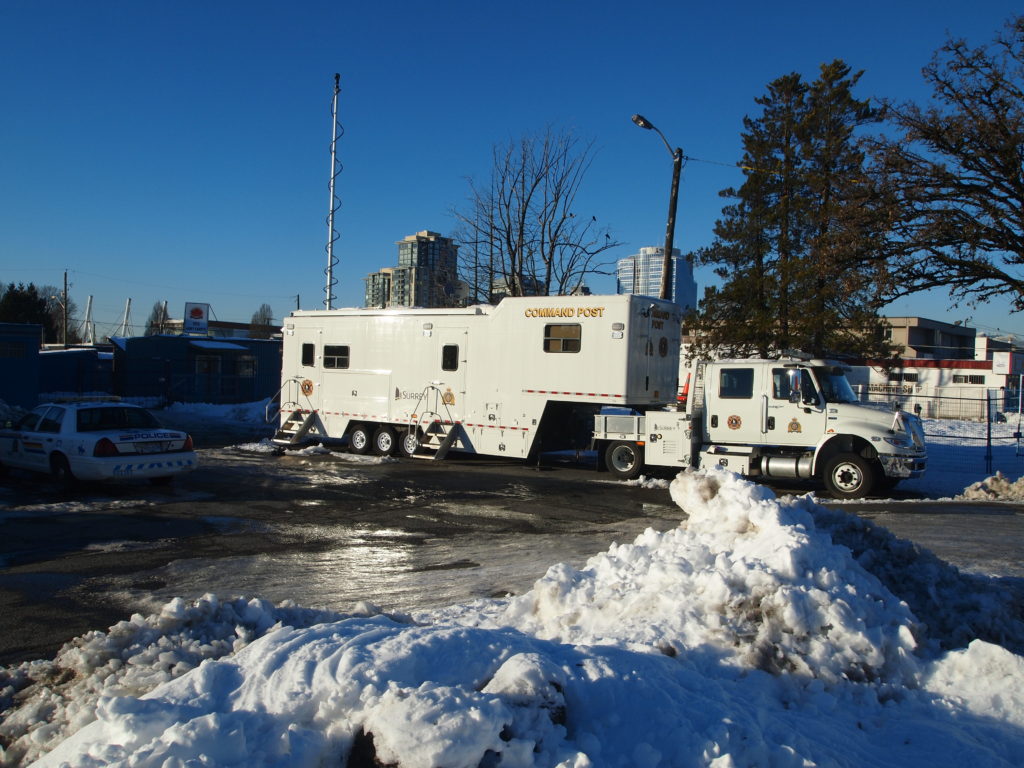 In early December 2016, the City of Surrey and the RCMP launched a new surveillance and containment strategy along 135A Street. Also known as the Surrey Strip, this two block stretch has for years been “home” to hundreds of Surrey’s homeless, and as homelessness in the region continues to expand, the number of people camped out on the Strip has increased. In mid January there were about 60 tents up along 135A providing shelter to over 100 people in sub-zero conditions.

The City’s usual practice has been to send police, bylaw and maintenance workers to the Strip every day to force people to take down their tents, pack up their belongings, and make everything they own “moveable.” This daily routine of official harassment and theft has also been augmented by searches for outstanding warrants or tickets for minor bylaw infractions like riding a bike without a helmet.

According to the RCMP, 911 calls to the Strip mushroomed in 2016 and the situation required a new strategy, although it is not clear who made these calls and what their concerns were. In response the City put together a plan for 135A that centered on the permanent presence of a Surrey Outreach Team comprised of 12 cops and 4 bylaw officers, along with fire officials, paramedics and Lookout Society outreach workers. And a mobile police command post has been set up in the parking lot of the Legion at the south end of the Strip to facilitate their work.

So as the cold and snow blew onto the Strip in early December making survival even more precarious for its homeless residents, the oppressive chill of constant police surveillance came with it. What the police call “building relationships” with “vulnerable” residents on the Strip is more like a relentless barrage of interrogating questions about who people are, how many are in the tent, what are they using to keep warm, why don’t they move into shelters, etc. etc. The City has created a fully policed, 24/7 outdoor shelter that resembles an occupied zone or an open-air prison.

Under intense police gaze the daily lives of residents are monitored. If someone is caught using drugs, they may be removed from the Strip and coerced into a treatment and recovery program. Cops build files on suspected dealers and prepare for a coordinated take-down. When cops or bylaw officers find people camped out in other spaces, they force them to pack up and move to the Strip where they can be watched. The public visibility and hostility that homeless people along 135A are forced to endure daily is made more oppressive by the relentless, scrutinizing presence of the state’s disciplinary forces.

According to Wanda Stopa who has lived on 135A for more than two years, people who walk onto the Strip are often questioned by the cops and in some cases refused entry. “I’ve been hearing that if the cops see someone who is a stranger to them, they are on them right away: “What are you doing here? You can’t go there.” They are telling people, especially at night, that they can’t walk down this street. If they don’t recognize you, they are stopping you and asking you why you are coming down here. They are treating us like we’re prisoners.”

In sub-zero temperatures, keeping warm at night is necessary for survival. Fire department officials have been a regular presence on the Strip, checking tents for possible fire hazards. On the morning of January 12th, they informed Wanda that they are seeking an injunction to ban all propane heaters and candles in the tents, and for warmth they will distribute long underwear, touques and hot water bottles. That very same morning, a person who had no source of heat in his tent was taken to hospital for frostbite. Ironically, “concern for safety” functions as a strategy for criminalization and displacement of homeless people on the Strip, yet Surrey’s weak Standards of Maintenance bylaws are rarely enforced to protect the safety of low-income renters against negligent slumlords.

Wanda maintains that there are fewer people out on the street. Maybe they are keeping warm in the shelters, hiding out in their tents or just avoiding the area because of the police presence. “It’s gotten creepy down here now, as you can see, nobody is out of their tents. At night-time it is really creepy, no one is out.”

The City’s Outreach Team on 135A says that its aim is to build trust with people, connect them with services, improve safety, and get them off the street. But why use cops with guns as outreach workers? In reality, the objective is to establish constant police surveillance and control in the heart of Surrey’s low-income, homeless community.