Homelessness is not a crime – Resistance to the criminalization of homeless survival in the everyday Downtown Eastside: By Maria Wallstam 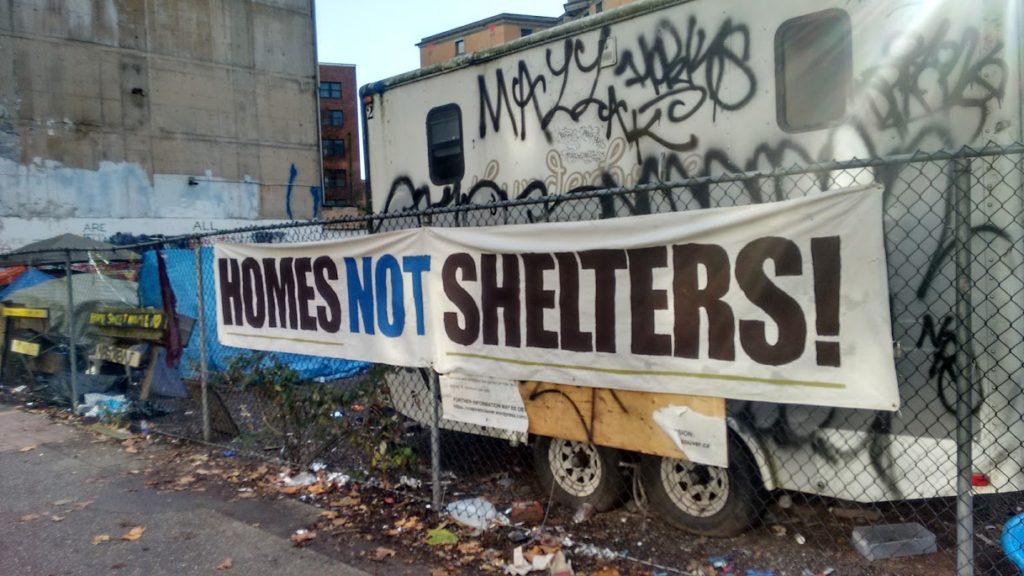 Wendy Poole Park tent city was razed to the ground in the early morning of November 24th and the dozen residents were displaced. And by 6pm on the same day all the tent city residents of 58 W Hastings were forced to evacuate the site they had called home for the last 4 months.  When they moved to a new tent city site at Thornton Park, park rangers and cops descended on the new tent city arresting 7 people who opposed the takedown. Around the same time, city workers dismantled the tent city outside the Living Room Drop-In Centre on Powell Street.

Far from being exceptional, displacement is the everyday experience of being homeless in Vancouver. Every week the City spends a significant amount of its resources in the area on harassing and forcibly displacing homeless people and homeless camps. Every day, the Mayor that proclaimed he would end homelessness makes it harder for homeless people to survive.

The City often uses safety concerns to justify the displacement of homeless people, but in reality displacement breaks up and destroys the little stability, safety and security that homeless people have, leaving them without access to shelter or housing. Displacement tears apart life-saving relationships, puts drug users at significantly increased risk of dying from overdose and also forces homeless people into alleys and dark spaces of the city where they face increased danger from police, anti-homeless and misogynist bigots who act under cover of isolation. Mayor Gregor Robertson doesn’t care about these basic facts, because to him the homeless-free appearance of Vancouver’s downtown core is more important than homeless people’s lives and survival.

Tent cities are spaces of survival and also of resistance. By coming together and setting up tent cities, homeless people are refusing to accept the laws that say they are illegal. They are refusing a society that doesn’t recognize them as humans. By refusing to accept the law, homeless people are creating social systems of support and solidarity that are outside the profit-driven logic of dominant society in Vancouver; their resistance points towards values of a better world, values that movements for social justice would do well to recognize and defend.