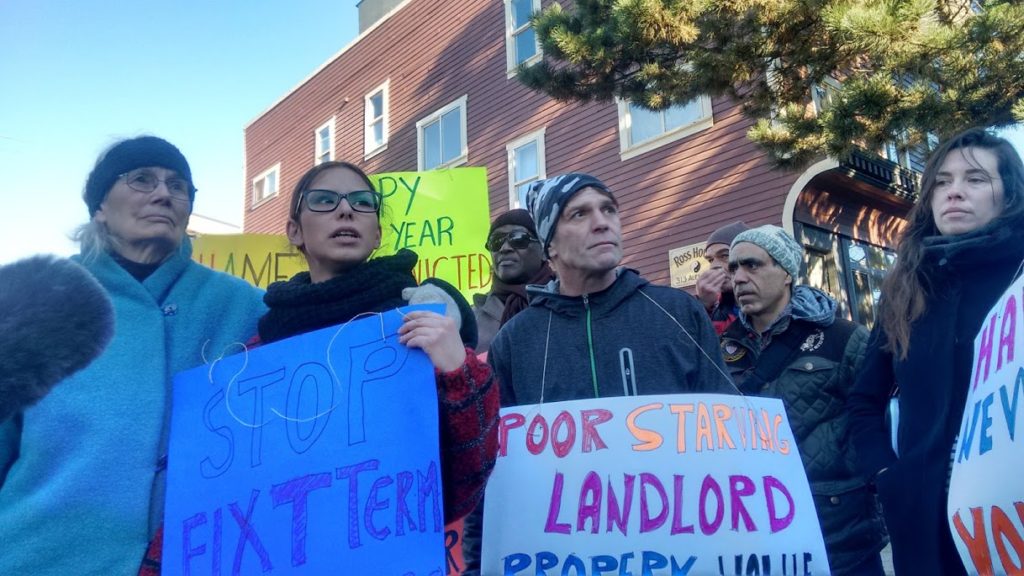 A boisterous crew was standing outside the Ross Hotel in Vancouver on New Years Day. We had called a news conference to support the residents, tenants of this single room occupancy (SRO) hotel who were being evicted and some who received huge rent increases. One of the tenants told us that the landlady had just de-activated her key fob so she couldn’t get into the building, her room and home. We all watched, along with a few TV cameras, as she tried the fob at the front door and couldn’t get in.

What the landlady did was illegal, it turned out, and the fob was reactivated. But the evictions and the rent increases are still happening. The owner of this hotel and other owners are using Fixed Term Leases to “control their tenants” and to raise rents as much as they want. The whole scene made me think of the 40+ years of organizing to try to get tenant rights for SRO hotel residents. Will fixed term leases erase some of the progress that has been made?

What are Fixed Term Leases? This is a section on page 2 of the official Residential Tenancy Agreement form where landlords can say that your tenancy is for a specific length of time. The landlord gets the tenant to sign in the box agreeing to a fixed term lease and, voila, they can evict you at the end of the lease for no reason or raise the rent as much as they want. And now SRO landlords are using the fixed term lease for exactly those reasons. Forty years of organizing down the drain if landlords use one little clause on the Residential Tenancy Agreement form.

Back in 1974 I worked at the Downtown Eastside Residents Association (DERA) in Vancouver. Tenants at the Victoria House Rooms, an SRO hotel on West Pender St. that has now been converted to a hotel for tourists, came to us and said they were getting a huge rent increase. Unfortunately for them, hotels in those days weren’t covered by the Residential Tenancy Act (RTA) but by the Innkeepers Act. The Innkeepers Act said that the owner could charge guest fees, raise rents by any amount, evict tenants at any time and actually seize their belongings. It also said that the hotel had to provide maid service.

We did some door knocking and ended up with a hearing at the Rentalsman’s Office. I went with a group of guys who are about my age now (73) and we were all sitting around a huge table. I made the legal argument that these people were permanent residents, having lived there for years, that they most certainly did not have maid service, and that therefore they should be covered by the Landlord Tenant Act and shouldn’t have the huge rent increase. The Rentalsman called me a zealot. I cried, left the room, and listened from the next room to the guys reaming out the Rentalsman for making me cry.

We actually ended up winning that case but only, I think, because the government didn’t want to put the whole category of SROs into the Residential Tenancy Act. They were willing to grant a specific exemption for the Victoria House Rooms but chose not to deal with the larger issue.

I also remember a meeting at the DERA office after the 1975 election had been called. Our NDP MLAs Gary Lauk and Emery Barnes came to try to get us to support them. We said we wanted SRO tenants protected under the RTA and they said they’d do it if the NDP was reelected but they refused to do it before the election was called. They were not reelected.

The lobbying to include SRO tenants under the RTA continued for years afterwards and only succeeded in 1989 under a right wing Social Credit government. Even though that was almost 30 years ago, most SRO residents still aren’t aware that they do have a few legal rights. The SRO Collaborative is a Vancouver group that is trying to organize tenants to understand these rights and improve the habitability of the SROs, but it is a long haul.