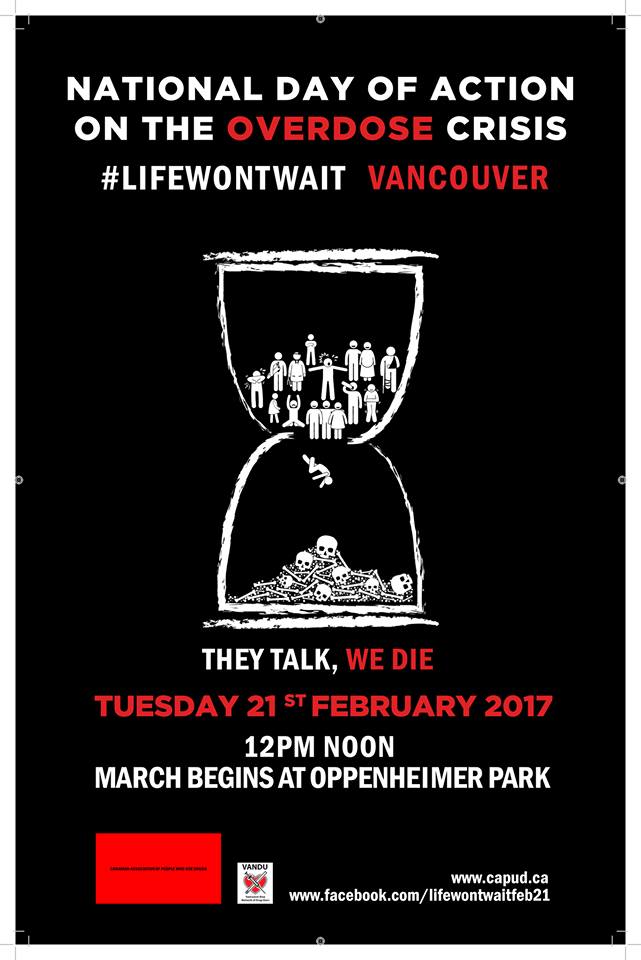 In the fall of 2016, through necessity, two alleyway tents complete with clean injection supplies and staffed by naloxone-trained volunteers were set up in Vancouver responding to the overdose crisis that killed over 900 people in British Columbia alone last year.

When the morgues filled, the provincial government scrambled, announcing future plans to open what have been called “Overdose Prevention Sites” in Victoria, Surrey, Vancouver, and beyond. And while people’s lives are being saved, the overdoses haven’t stopped. But what I call “death prevention sites” are a necessary service so long as the federal government continues to prohibit drugs.

Decriminalization, regulation, and legalization, are words used to describe alternatives against the drug war but they have different meanings, ways of implementation, and outcomes.

If we decriminalize all illicit drugs people wouldn’t be sent to prison or have a criminal record for using drugs. They wouldn’t have to worry that their drug use will keep them from their kids or get them evicted from their home (unlike BC’s Crime-Free Multi Housing Program). Decriminalization of illicit drugs is the first step in emptying our prisons in Canada and moving towards community solutions that don’t involve putting our neighbours in cages.

In order to manage the distribution of drugs and control the purity, regulation of some form could be implemented, similar to how we manage drugs like alcohol and nicotine. In 2001 Portugal decriminalized all illicit drug possession – a vastly different approach to drugs than what we know in Canada.

Legalization often represents a less restricted model of regulation by governments. For an example of this we can look at the differences between the sale of caffeinated drinks like soda and the sale of alcohol. Anyone can buy soda under any circumstance so long as they can pay for it. Alcohol, however, has regulations around the age of customers and restricting the sale of alcohol to someone who appears intoxicated.

All of these options, however, include some form of state involvement. Another question that we need to consider is how, if at all, should our state be involved in one’s decision to use drugs? Is involving state regulation the only way to ensure that our drugs aren’t tainted?

Opioid-assisted treatment has been successful in countries across the world including Canada. Vancouver is home to Crosstown Clinic where patients received pharmaceutical-grade opioids up to three times a day for addiction treatment. People know what they’re receiving, overdoses are prevented, and the everyday stress of avoiding death is lessened through the provision of clean drugs. But addiction treatment options need to be as varied as humans themselves. We need every possible option to support people in their health decisions whether or not we agree with their decision to use drugs. If someone seeks abstinence-based treatment, opioid-assisted treatment, or treatment of another form we should make that available for them on-demand with no barriers like cost or a waiting list preventing them from access. But we shouldn’t assume that because someone is using illicit substances that they need or want treatment, when in fact this is often not the case. All people, regardless of their desire to access treatment, need clean drugs.

Depending solely on the health care system to “fix” this overdose crisis simply shifts people from criminals to patients, hampering their autonomy while they answer to the state in a different form. Doctors will continue to prescribe treatment at their own discretion, forcing people to seek outside of the health care system to get the medication that they are so desperately seeking if they aren’t getting what they need from their doctor. Federal Health Minister Jane Philpott is encouraging such practice with her plans to limit opioid prescriptions, something that will surely drive people to the street in search of relief.

Listen to people who use drugs

Rather than seek more input from “experts” in the drug field, we must look for answers from the people who have the most experience –people who use drugs. What do they want? Any changes to drug laws should come from the community who will be most affected. They are the true stakeholders in this fight and they should lead the way. And so we need to push further in our problem solving. Death prevention tents have provided a critical service during this time of desperate need but they aren’t enough. Prohibition has never helped, only harmed, and decriminalization is a critical starting point—so let’s begin there.

Community media and the fight against gentrification in Medellin, Colombia