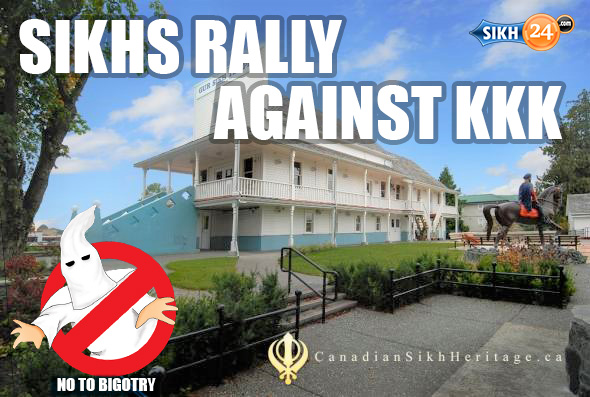 On Sunday, January 15, the Coalition Against Bigotry held an anti-racism rally in Surrey. The rally took up the occasion of Martin Luther King Jr. Day to call the community together against a visible rise in race hatred. Organizer Imtiaz Popat said he wanted to demonstrate that “we will not tolerate any organized attempt by White Supremacists to organize and promote hate towards any target community.”

The organized racism that spurred Popat to action includes anti-Asian racist fliers that have been spread around in Richmond and South Vancouver, KKK literature spread in Mission and Abbotsford, and the emergence of a white supremacist vigilante group that calls themselves “Soldiers of Odin.” Soldiers of Odin has been sighted doing “patrols” in Maple Ridge, counter-protesting at an anti-racist rally held in Richmond, and in the DTES, where anti-fascist organizers say these white supremacists attacked a community meeting space with bear spray on new years eve. According to rally supporter Gurpreet Singh, organizers expected Soldiers of Odin would turn out to counter-protest the Surrey MLK rally like they had in Richmond. But they didn’t show.

Rather than counter protest the MLK rally, white supremacists went into Abbotsford where they drive-by dropped anti-MLK literature wrapped in plastic bags like dog turds on 70 residential driveways. Gurpreet Singh, who had supported the Coalition Against Bigotry’s actions in other communities, felt there had to be an immediate response against white supremacist organizing in Abbotsford. Singh publishes Radical Desi, a monthly social justice magazine and considers himself a freelance activist. “This is the second time this happened in Abbotsford,” he said. “We need to have a reply right away.”

On Sunday, January 22, Gurpreet Singh and Imtiaz Popat are organizing the Abbotsford anti-racism rally at the heritage Sikh temple because they want to build on the powerful legacy of anti-racist organizing at that Gudwara. “The Khalsa Diwan temple was created 100 years ago by South Asian activists to fight racism,” Singh explains. Anti-Asian racism in the 1910s was rooted in global systems of colonialism. Gurpreet Singh says, “100 years ago Canada and India were British colonies. The South Asians who came here were expecting equal treatment but they received discrimination.”

White Canadians considered themselves to be an enfranchised part of the British empire, and so aligned themselves against South Asians in Western Canada. White Canadians racialized South Asians as subordinate to them because India was colonized within the British global colonial system. Singh says Sikhs in the Fraser Valley realized this. “They formed the Gadhr party – an anti-colonial revolutionary party focused on the liberation of India from British colonialism – because the fight against racism here was connected to the fight against British colonialism in India.” Sikh temples in Abbotsford and New Westminster were central to this fight.

Although the British empire has changed in the last 100 years, Gurpreet Singh says that organized racism is still based in structures of colonial and imperial power. “Racism has always been there,” he says. “Some people are saying that because Trump was elected we are seeing fliers distributed. But racism was always there. Trump is just a symptom. During Obama there was police violence against Black people in cities in the United States. In Canada there is structural violence against Indigenous people because the mentality of white supremacy, of terra nullis [the belief that European settlers arrived on Turtle Island to find a blank slate without any societies to disrupt] is the foundation of this country. When we see racists getting organized that’s just a symptom of the foundational problems. We have to continue this kind of activism the same way our ancestors did.”

Gurpreet Singh said that the Soldiers of Odin and other white supremacists try to present anti-racists as the extremists. “They will call us feminists and communists to try to marginalize anti-racists,” he says. This is an attempt to normalize their hate and make it an acceptable wing of political expression. “In India the fascists target moderate Hindus.” This makes responding to their propaganda the responsibility of all of society. “We have to demonstrate that their ideas are not acceptable,” he says.

White supremacists in the Fraser Valley are targeting homeless people as well. One resident of the Maple Ridge homeless shelter on Lougheed told me last week that one night in late December they found two men climbing the fence in the alley behind the homeless shelter. He shouted at them and said he would call the police and they jumped down and ran off. He said he saw a big crowd of men behind the two climbing the fence, and that they looked like Soldiers of Odin. Gurpreet Singh said that this reminded him that organized racists attack women first in any community they target – “they look for vulnerable people,” he said.

“Liberals treated Trump as an outsider candidate because they said his racism was too extreme, they thought it was not part of society,” Gurpreet Singh said. “But just because Trudeau has appointed Harjit Singh Sajjan, the first Indo-Canadian Minister of Defense, doesn’t mean he has changed the roots of society. I don’t agree with that. I don’t believe in symbolic actions at the top. What we can do in our communities is raise the problems as they are at the root. This anti-racism rally is raising the problems that we have today, just like our ancestors did when they founded this temple 100 years ago.”

The rally against racism and bigotry will be held on Sunday January 22 at 12:30pm in the parking lot of the Heritage Sikh Temple, 33094 South Fraser Way Abbotsford. Gurpreet Singh says that everyone who opposes racist hatred is welcome. See the public Facebook event page here.