The first public presentation of the People’s Plan for the development of Metrotown took place outside of Metrotown Library on January 16. While city staff inside the library displayed their pretentious “Draft Metrotown Downtown Plan,” members of Stop Demovictions Burnaby (SDB) set up an alternative development vision just outside the library’s front door called the People’s Plan. After two years of protesting Corrigan’s displacement policies, the Stop Demovictions Burnaby Campaign is developing an alternative vision for the development of the heart of working-class Burnaby.

By all accounts, few Burnaby residents came to visit the City’s presentation but many added their names to our Stop Demovictions Burnaby petition. Leslie Madison, SDB member, told me that several people leaving the MDP info session understood from their presentation that it was a “done deal” already! They were relieved to know this is not the case and that there is  still an opportunity for their input to be heard and included within the People’s Plan for Metrotown… and signed the petition. Leslie thinks there were more people at the outdoor People’s Plan rally then at the City’s presentation inside the library.

The principles of Burnaby’s plan has already caused the eviction of 1,200 people and will eventually displace 6,000 more. Demovictions cause homelessness because rental vacancy rates are near zero all the way to Abbotsford. Even if the demovicted are able to find a new place they are faced with the daunting prospect of being forced to leave their neighbourhoods and spend even more of their budget on rent and travel. For over a year the Mayor and city staff have refused to listen to the plea of residents to stop this “Demoviction Plan.” Mayor Corrigan’s latest reply has been that they have to plan for thousands of people projected to move into the Lower Mainland. Burnaby Council claims it has no choice but to displace thousands. 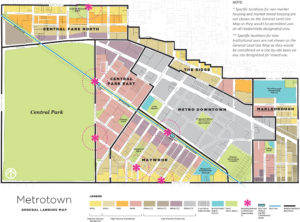 Why is Burnaby positioning itself to only welcome those who will afford the new condominiums completely out of reach to the majority? The Stop Demovictions Burnaby Campaign believes greater principles must guide the future development of our neighbourhoods. We are working on developing an alternative to Burnaby’s demoviction plan – a Metrotown People’s Plan, based on three guiding principles:

#2. INCLUSION AND BELONGING FOR CURRENT DIVERSE RESIDENTS: Protect the sense of community, our neighbourhood family. Language and culture supports for newcomers. Self-esteem for renters – autonomy, ability to have self-respect. Access and funding for advocates and translation

The Metrotown People’s Plan is a rallying call for all us who dream and work for a better way to develop Metrotown. The People’s Plan also takes seriously the fact that we all live on unceded lands. Sadie, Nuu Chah Nulth and Irish and her daughter Destiny, Nuu-chah-nulth, Irish and Gitxsan, graciously offered us the song Kuuxjem Okanogan in acknowledgment of the traditional keepers of these lands. How can our city government not prioritize housing for all homeless and displaced Indigeneous people first of all?

Stop Demovictions organizer Leslie Madison regularly volunteers to call campaign contacts and, through hundred of calls, has learned a lot about the challenges Burnaby residents face in letting city council know what they need. “When I was calling folks who have signed up to be informed… many so wanted to attend to share their input for a People’s Plan for Metrotown but due to financial constraints, work/school hours, timing of transportation, illnesses, treacherous road conditions, darkness, immobile-isolated, age, life demands, etc., were their stated barriers to attend.  However, all folks who I spoke with wished they could attend, and look forward to future accessible opportunities to give input”.

Madison explained, “Many of the folks who I spoke with on the phone didn’t even know that the city of Burnaby was doing an information session at Metrotown Library and were grateful we were keeping them informed. Some folks were surprised that Burnaby refuses to coordinate a regional strategy plan with surrounding municipalities, recognizing this is a regional crisis. Another was happy to translate the information into Mandarin to broadly inform and give opportunity for their input. Another wondered if their input would be relevant because of their legal status… I assured them, refugees are welcome here!”

Countering the stress of displacement

Leslie says that the most common feeling she gets from people is despair. “One person said, damn, where are folks to go? Burnaby doesn’t even have shelters for those who are homeless now. Another admitted they have been affected by displacement. Unable to secure alternate housing they have been forced to impose on a friend to use their couch so they can continue to work.”

Back at the anti-demoviction picket outside library even children who were returning library material to the drop off slot expressed interest and concern for all the people who have already been displaced from their communities. One child agreed that Burnaby’s plan should include placement before displacement and translated the campaign leaflet for her parents.

The opposite of despair, Leslie said, is mobilizing together. Leslie says, “It was good to see some of the folks I spoke with on the phone, standing in solidarity for a People’s Plan for Metrotown.” By coming together to fight Corrigan’s displacement plan and develop a Metrotown People’s Plan, people are overcoming their anxieties and putting their community – their greatest collective asset – into action.