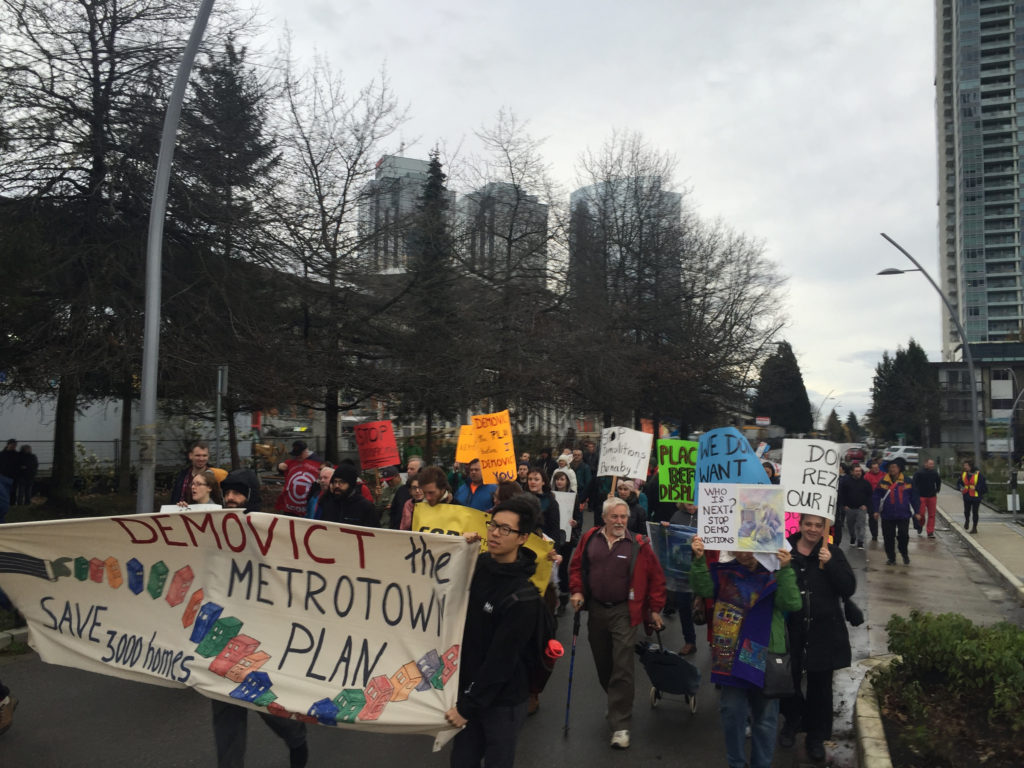 On November 12, 2016, Metrotown residents rallied and marched with the Stop Demovictions Burnaby campaign against the proposed redevelopment and rezoning plans of the Metrotown neighbourhood. Despite a blustery and cold day, over 100 Metrotown residents marched through the streets of their community, demanding Burnaby City Council and Mayor Corrigan stop the rezoning of existing 3-storey walk-up apartment buildings into expensive condo towers, a rezoning decision that will cause the displacement of 6,000 residents of the area.

The rally and march was an unprecedented mobilization in Burnaby, a city that has little history of anti-gentrification and anti-displacement resistance. The Volcano is publishing the speeches of some of the speakers at the march to highlight community resistance and courage against a mass displacement plan that will have rippling effects for the entire Lower Mainland, as we lose hundreds of existing affordable rental units. 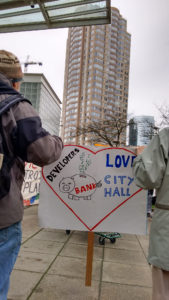 In Erika S.’s words: “Here we are – in the epicenter of the ‘mass slaughtering’ of a viable neighbourhood, Burnaby’s Metrotown Rental Community. Many older livable rental buildings, most of them well maintained and in good condition, with 10, 20 or even 30 years of life left… shall be torn down to make room for high end condo towers such as this one, here.

“In the wake of this ‘mass slaughtering’, many rental buildings will be demolished and 3,000 rental units will be lost. This means about 6,000 people with lower and moderate incomes are facing demoviction from their affordable rental homes. If this is not alarming, what is? 6,000 renters are no longer safe. They are at the mercy of the City of Burnaby.”

“Sometimes I wonder about the mayor’s legacy. Will Derek Corrigan be remembered as the ‘Bulldozer of Metrotown’ or as the mayor who delivered inclusive solutions for Burnaby residents of all income levels?” 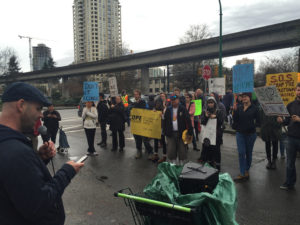 Rick McGowan, Metrotown Residents Association, told marchers: “sometimes we need to step out of our comfort zone when our leaders choose to ignore us. And they are ignoring us big time.

“A safe place to live is a basic right and need. Fair pay for one’s labour is the hallmark of a just society. The detachment of affordable housing from our income is intolerable. Destroying affordable homes without a replacement plan is an injustice. This is a failure all levels of government share.

“Today my frustration is focused on the City, Mayor Corrigan and his councilors. When we first pointed out what was happening, we hoped they would appreciate the unintended consequence of the mass displacement caused by the first couple of developments. With each new application it became increasingly clear that displacement was not a consequence, but rather the intention.” 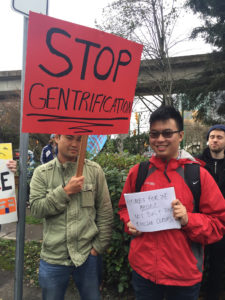 Sara Sagaii concluded the rally with the call, “Hell No! We Won’t Go!”: “A piece of paper, or 3,000 of them, do not have the power to displace, to rob 3,000 families of their right to continued shelter.

“A piece of paper is only a piece of paper but it finds power because we obey its orders. And we obey because behind the facade of rationality in that piece of paper stands the repressive power of state, I’m talking about the cops who have been escorting us all along today too. This power has no logic, knows no reason, humanitarian or otherwise, its only logic is that of violence. A piece of paper is a facade. Evictions are violence at the hands of the police.

“We must physically resist this irrational violence. Tear up the damn pieces of paper. Tell the city we are through obeying. We are not disposable and we will fight them to prove this.

The City of Burnaby can demovict the plan! By Erika S, resident facing demoviction in Metrotown