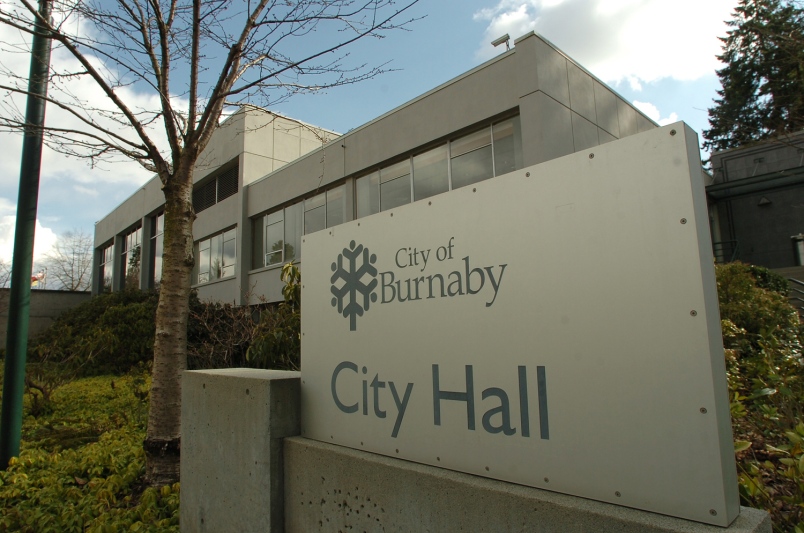 The scene at Burnaby City Hall was a predictable one. More than two-dozen people rallied in the lobby outside council chambers with banners and signs reading “stop demovictions,” “homes not condos,” and “stop displacement.” They waited while council heard speakers on other rezoning applications and rolled their eyes while homeowners anticipating increased ambulance sirens (from one a week!) due to a proposed expanded senior’s complex. These homeowners’ concerns were met with earnest and supportive questions from council.

And the rezoning application that other residents of Burnaby were waiting to oppose was also predictable: four apartment buildings containing 84 units of low-end of market rental apartments and – according to ACORN organizer Zoe Luba – more than 350 residents faced demoviction by rezoning for a single condo tower.

What was not predictable about this hearing was that the speakers – even though restricted by a 5 minute timer for the first time in Burnaby City Hall history – provoked Mayor Corrigan into revealing his reasoning for displacing the existing residents of Metrotown. His reasoning is simple: immigration.

After nearly two hours of speakers who universally opposed the rezoning, with the exception of two curiously well-dressed speakers in favour, Mayor Corrigan’s face was flushed red with irritation. Just after 10pm, after another speaker called for council to stop displacing people through rezonings, Corrigan exploded. “Where would you put 40,000 people a year!” he demanded. “Tell me. There are 40,000 people coming into the Lower Mainland every year through the federal government’s immigration and refugee acceptance numbers. Where are they going to go? That’s the problem we mayors are facing.” The speaker suggested that council use inclusionary zoning to require developers to include rental and social housing in their rezoned developments. Councilor Colleen Jordan jumped in and said, “that would cause a developer-strike.”

The outbursts from Corrigan and Jordan marked a departure from Burnaby council’s usual rhetoric. Until now, their approach has been to frustrate media inquiries about demovictions by confusing the issue and blaming senior levels of government for the rezonings that are actually the exclusive power of municipalities in BC. While it was relieving to hear Corrigan finally take responsibility for demovictions, his rationale was frightening in its rigidity.

What does it mean to blame immigration for demovictions? There are two implications.

One, it suggests that immigrants are an outside force that Burnaby is helpless to stop. The two possible solutions within this logic are either that the buildings Corrigan has already targeted for demoviction must be demolished and redeveloped at all costs, or that immigration must be stopped. This is a logic that will press through rezonings without pause to regard their social effect because of the panic that the outside force is coming.

It is important to note that Corrigan himself has constructed the terms of this closed-circuit logic. He is the chair of the Metro Vancouver Council that developed the regional growth strategy, and he claims he directly oversaw the setting of development targets for the region. And he has directed the ad-hoc development policies (and the proposed Metrotown ‘downtown’ plan) that target for rezoning and redevelopment the homes of those most vulnerable to displacement and homelessness rather than target, say, extremely low-density single-family homes that are also on the transit route. Corrigan’s manufactured logic is useful for him because it provides him with a principled reason to refuse to budge from displacing thousands of Burnaby renters. Like Standing Rock is a sacrifice zone for the Dakota Access Pipeline, as Dave Diewert from the Stop Demovictions Burnaby Campaign said at the hearing, Metrotown is a sacrifice zone for this development-at-all-cost.

Two, Corrigan’s “immigrants are coming” logic also provides a material basis for a growing anti-immigrant, nativist ideology. The Stop Demovictions Campaign has consistently argued for solidarity and to join in struggle with newcomers rather than blame refugees for taking some of the scarce rental housing units still available. And Alliance Against Displacement has fought against the anti-immigrant and settler-entitlement embedded in anti-foreign investment rhetoric. Corrigan’s plan to accommodate higher-income newcomers by displacing existing residents will be felt as evidence that new immigrants demovict current residents. It is inevitable that some will interpret this evidence to support and foster a white racist and nativist ideology.

Corrigan is wrong – ethically as well as logically. Corrigan’s the “immigrants are coming” logic does not support the demolition of these four apartments at Dunblane and Imperial, nor the demolition of 3,000 apartment units in the rest of the neighbourhood by the Metrotown Plan. As Sherry Chan, a working class Chinese mother of two who has been twice-demovicted, pointed out at the hearing, “I am one of the 40,000 and I am being displaced.”

Corrigan’s reliance on the for-profit real estate market as the sole lever to create new housing stock means the new homes will be affordable only for a professional-managerial class. The working class and low-income residents who already call Metrotown home, as well as those on their way, will not find the doors of these glass towers open to them. The danger opened by Corrigan’s admission of responsibility for demovictions is that he is covering up the class divisions of market-driven development by stoking race divisions.

The opportunity is to reject his logic altogether, to throw out his proposed Metrotown development plan and make a new one from the ground up based on the philosophy that no one is disposable.

Hell no we won’t go! Refuse the laws that demovict us